Set in a world where toys have a life of their own—when people are not present—Toy Story takes moviegoers on a fantastic fun-filled journey, viewed mostly through the eyes of two rival toys: Woody, a pull-string talking cowboy, and Buzz Lightyear, a heroic space action-figure. The comically mismatched duo eventually learn to put aside their differences when they’re separated from their owner, Andy, and find themselves on a hilarious adventure-filled mission… where the only way they can survive is to form an uneasy alliance. (Courtesy Disney+) 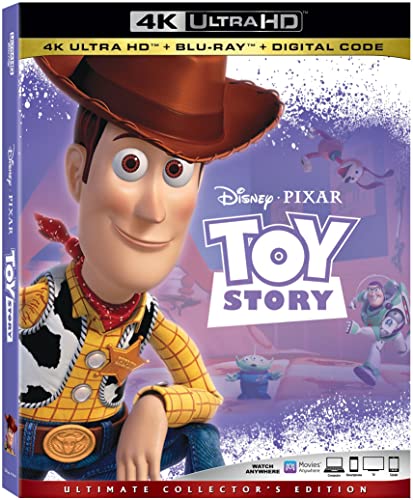 The 1995 film, Toy Story, revolves around a little boy named Andy Davis’ (John Morris) toys in the days before his family moves to a new home. The toys, who come to life when no humans are around, become upset when they learn his single mother (Laurie Metcalf) is throwing Andy his birthday party a week early. New birthdays mean new presents which means new toys will make old toys unwanted.

A brief toy panic ensues as Andy’s friends begin to arrive to the party. Woody sends Sarge (R. Lee Ermey) and his green army men on a mission to spy on Andy as he opens his presents. Sarge relays the gifts via a baby monitor used for Andy’s sister, Molly. The toys only calm down once Andy opens his last gift—nothing would replace them this time around. However, Andy’s mother gives him one last-minute surprise gift which causes a stir—a Buzz Lightyear (Tim Allen) action figure who, when he comes to life, thinks he’s a real space ranger. Buzz is an immediate hit with both Andy and the other toys which makes Woody jealous especially after Andy replaces Buzz as his favorite toy.

Two days before the move, Andy’s mom takes the kids for dinner at Pizza Planet. Andy wants to bring a toy with him, but his mom only lets him take one. Woody, wanting to be Andy’s choice, uses a RC car to knock Buzz behind the desk, but Buzz falls out the window by mistake instead. The other toys—sans Bo Peep and Slinky—think Woody deliberately did it. However, Andy grabs Woody before they can get revenge on him. Buzz picks himself off the ground and jumps onto Andy’s car. Once it stops at a gas station, he confronts Woody. As the two argue, they fall out of the car and Andy’s mother drives off without them.

The two argue a bit more before they hitch a ride on a Pizza Planet delivery truck. Once there, they sneak into the pizza joint and look around. Buzz stumbles upon a claw crane that’s in the shape of a rocket ship and full of Little Green Men. He climbs inside, thinking the rocket is real, and tries to get the men to help him. Woody jumps inside too so he can grab Buzz and they can then catch up to Andy.

Andy has a sadistic next-door neighbor named Sid Phillips (Erik von Detten) who likes to destroy and/or blow up his toys, and he’s at Pizza Planet too. He plays the claw game and is able to grab one of the Little Green Men before spotting Buzz inside. He grabs him too only to find Woody clinging to Buzz’s foot. Not too bad for a game rigged to pay out as little as possible. He takes them home to his room where the two meet Sid’s Bull Terrier named Scud and his mutilated toys he’s destroyed over the years.

The two try to find a way to escape when Sid leaves his door open in his room. Woody goes one way and Buzz the other. However, Buzz gets a huge dose of reality when he sees a TV commercial for a Buzz Lightyear action figure and realizes he’s not real. However, he tries to prove to himself he’s real and jumps off the second story banister to fly. He hits the ground with a thud, breaking his arm off.

Woody later finds the broken Buzz (literally and figuratively) in Sid’s sister Hannah’s (Sarah Rayne) room and takes him back to Sid’s room where the disfigured toys reattach his arm. Then Sid excitedly runs into his room with his newly arrived explosive rocket which he promptly tapes to Buzz. Luckily for Buzz, a thunderstorm delays launch until morning.

That night, Woody gets Buzz out of his slump with a rousing speech about how important he is to Andy, but the sun rises and time’s up. Sid takes Buzz outside to blow him up. Woody and Sid’s other toys form a plan to break some rules to teach Sid a lesson and free Buzz. The plan works and they scare Sid straight before rescuing Buzz.

However, this day is also moving day for Andy and his family, and Woody and Buzz return home as the moving truck and Andy’s mom drive off separately. The two take chase after the truck on foot, but Scud goes after them, grabbing Woody. Buzz fights off Scud long enough for Woody to climb into the moving truck and use the RC car to distract Scud and rescue Buzz.

Unfortunately, Andy’s other toys think Woody is now trying to get rid of RC car, and they toss him back into the street where he reunites with RC and Buzz. Once they escape Scud’s pursuit, the other toys spot them and realize their error, but RC’s batteries run out before they can catch back up to the van. Woody lights the rocket still strapped to Buzz which launches them into the air. Woody drops RC into the truck before Buzz opens his wings to cut the tape and separate themselves from the rocket just as the rocket explodes. He and Woody fall with style past the moving truck and plop safely through the open sunroof of Andy’s car. They land in the box next to Andy who promptly finds them.

We cut to Christmas in Andy’s new house. Sarge and his men spy on the gift opening again while the other toys wait. Molly gets a Mrs. Potato Head which thrills Mr. Potato Head. Woody and Buzz joke over what could be a worse gift than Buzz, but find out the answer when Andy gets a puppy for a happy ending.