In Toy Story 2, while Andy is away at summer camp, Al McWiggin—a greedy collector and proprietor of Al’s Toy Barn—toynaps Woody! Buzz and the rest of the gang; Mr. Potato Head, Slinky Dog, Rex and Hamm spring into action to rescue our cowboy hero from winding up as a museum piece. It’s up to them to find a way to save Woody before Al sells him to a museum in Japan, or they’ll never see him again! 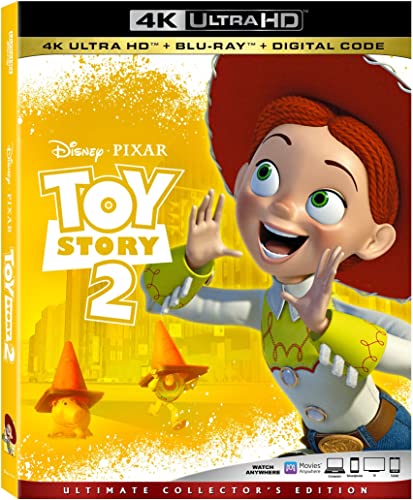 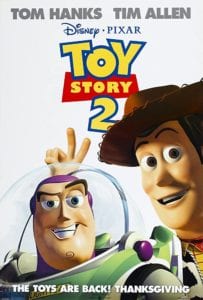 Andy’s toys are back in what in my opinion is one of the best sequels ever made. All is well in Andy’s room until Andy accidentally rips Woody’s arm while playing. Andy leaves Woody on the shelf while he heads off to Cowboy Camp. Woody is crushed and all of the toys are surprised.

Andy’s Mom throws a yard sale while is Andy is gone and chooses a few toys to sell. She takes Wheezy and Woody uses the family dog, Buster to try and save him. Woody ends up being stolen by the unscrupulous Al from the Al Toy’s Barn Commercials. Woody completes his Woody’s Roundup collection and he knows he can get big bucks for him.

IN Al’s apartment, Woody gets to meet the rest of the Roundup Gang; Jessie the Yodeling Cowgirl, his horse, Bullseye, and the Prospector, Stinky Pete. They long for the day they get out of storage and are displayed in a museum. They show Woody a video of his TV. Show and various collectibles that line the room including a lunchbox and cookie jar.

Woody just wants to get back to Andy and his friends. The Roundup Gang get annoyed by Woody’s longing for home. Jessie shares her tale of being abandoned by her girl, Emily.

Meanwhile, the toys in Andy’s room have launched a mission to recover Woody. They figure out that it was Al from the commercials that took Woody and precariously get to Al’s Toy Barn. Buzz finds an entire fleet of Buzz Lightyears and is captured by a Buzz that is just as zealous and delusional as he was when he first came to Andy’s room. The new Buzz captures Andy’s Buzz and traps him in a box.

The toys see Al drive the quick distance to his apartment and they all head to Al’s home to rescue Woody. They unknowingly are pursued by the new Buzz and his nemesis, The Evil Emperor Zerg.

The resourceful toys find their way to Al’s apartment. Woody is thrilled to see them but has been convinced by The Roundup Gang to be sold with them. Buzz and the gang are disappointed and begin to head home. Woody sees a video with a boy playing with the TV. Woody and he realizes that he would rather be with Andy, even if it is for a short while. He invites the gang to join him and Bullseye and Jessie decide that they want to be with kids as well. Stinky Pete prevents them from escaping. The Roundup Gang are packed up by Al who is heading to the airport to catch a flight to Asia to sell the gang for a pretty profit.

At the airport, Woody and Bullseye make a harrowing escape from the suitcase. Woody puts Stinky Pete in a girl’s backpack. He will also be a beloved toy, with tattoos. Jessie is stuck in the suitcase and boarded in the cargo area of the plane. Woody and Bullseye make a daring rescue, just like the TV show. The toys are reunited with Andy and all is well in Andy’s room again.