In the international zombie hit, Seok-woo is a divorced workaholic who is guilted into taking his young daughter via train to see her mother in Busan for her birthday. However, a zombie outbreak occurs at the same time that overwhelms the government and military forces of Korea. Now, trapped on a train with zombies, Seok-woo and the other survivors must find a way to make it all the way to Busan, the last identified safe place in Korea. 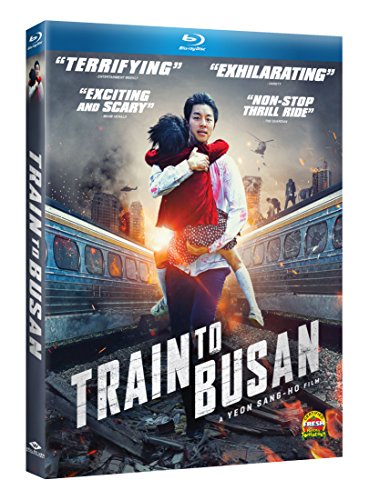 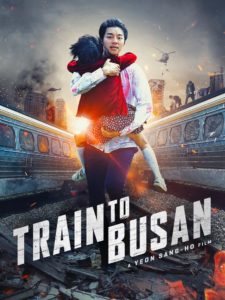 The film begins with an emergency team spraying down a delivery van as it leaves a chemical leak near a biotech plant in South Korea. The van pulls away and the driver becomes distracted and strikes a deer, presumedly killing it. The driver looks back at the deer, but then pulls away, leaving the crushed body in the road. As he pulls away, the deer begins to rise from the road, with cloudy, dead eyes. The deer then begins to walk away seemingly unharmed.

Next, fund manager Seo Seok-woo (Gong Yoo) works to deal with a catastrophe at work. Seok-woo is a cynical workaholic whose selfishness has cost him his marriage and the respect of his daughter, Su-an (Kim Su-an). The next day is Su-an’s birthday, and Seok-woo’s only daughter has asked her father to let her travel by train to see her mother in Busan. Seok-woo informs his daughter that she is too young to travel alone, and he is too busy with work to take her. He tries to buy her affection with the gift of a Wii game system, something that she points out that Seok-woo has already purchased for her. Feeling guilty, Seok-woo watches a video recorded by Seok-woo’s mother (Lee Joo-shil) of Su-an suffering stage fright while she sings “Aloha ‘Oe” at a recital that Seok-woo was too busy to attend. Seok-woo decides to take his daughter to see her mother the next day.

The next day, Seok-woo and Su-an board a KTX 101 bullet train from the Seoul Station to Busan. Other passengers on the train include a no-nonsense working man Yoon Sang-hwa (Ma Dong-seok) and his pregnant wife Seong-kyeong (Jung Yu-mi); a selfish businessman Yon-suk (Kim Eui-sung); a train attendant Ki-chul (Jang Hyuk-jin); elderly sisters In-gil (Ye Soo-jung) and Jong-gil (Park Myung-sin); a high school baseball player Min Yong-guk (Choi Woo-shik) and cheerleader Kim Jin-hee (Ahn So-hee); and a homeless man who has stowed away on the train (Choi Gwi-hwa).

Additionally, the passengers learn that the zombies cannot operate the sliding glass doors of the train, although they are capable of breaking through them. News reports broadcast throughout the train of the rapidly spreading epidemic across the entire country. Seok-woo and his daughter hide in the back of the train with Sang-hwa and Seong-kyeong. He finds out from one his co-workers over the phone that the infection may have spread from a biotech plant connected with his business. Seok-woo continually attempts to secure safe travel for himself and Su-an, and he continually lectures his daughter about watching out for themselves and not worrying about others.

The train stops at Daejeon Station which the train captain (Jeong Seok-yong) believes is secured by the South Korean Army. The passengers find the station vacant and begin to move towards the entrance. At the entrance, they find the soldiers have become zombies who quickly charge after the group. Many of the passengers are attacked and killed as they race back to the train. Most of the surviving passengers safely board the front cars, including Jong-gil, Yon-suk, Ki-chul, and Jim-hee. The homeless man, In-gil, Su-an, and Seong-kyeong all board the train in the most densely packed portion of the infected areas and are forced to hide themselves in a restroom. Meanwhile, Seok-woo, Sang-hwa, and Yong-guk all reboard in the zombie free back of the train. The train captain drives the train out of the station and proceeds to Busan which he is informed is a quarantine zone.

When Seok-woo and Sang-hwa learn that their loved ones are trapped in the middle train cars, they prepare themselves to battle the zombies and free them. Yong-guk decides to help them with his baseball bat. They slowly but progressively work their way forward car by car. Along the way, they learn that when the train is in a tunnel, the zombies cannot see them. Eventually, they free their loved ones from the bathroom. They continue towards the front of the train where most of the passengers are located. Yon-suk convinces the front train passengers that all other persons on the train maybe infected so they seal off the doors so that Seok-woo’s group cannot get safely to them. Seok-woo’s group finds themselves trapped between the front passenger car and the approaching zombie hoard. Sang-hwa sacrifices himself to give Seok-woo time to get the others to safety. Additionally, In-gil sacrifices herself to allow Seok-woo’s group time to lock the sliding glass partition door. Jong-gil watches helplessly as her sister is killed.

Eventually, the train is forced to stop at the East Daegu train station when the track is blocked by debris. The train captain disembarks from the train and starts up another train engine on a separate track. The survivors also work their way towards the new train engine. Yon-suk pushes Ki-chul towards the zombies to facilitate his escape from the train. Yon-suk also sacrifices Jin-hee to escape the zombies. After Jin-hee is bitten, Yong-guk stays with her until she turns and bites the devasted baseball player. Seok-woo leads a second group, but their way is blocked by another train filled with zombies. However, an out-of-control train causes a derailment, trapping Seok-woo, Su-an, Seong-kyeong, and the homeless man under a train car. Seok-woo finds a way out under the train while the homeless man sacrifices himself so the other three can get away. At the same time, Yon-suk is nearly overtaken by the zombies and the train captain goes to help him. The captain is overwhelmed and bitten.

Seok-woo’s group barely makes it to the train. After releasing the train from a horde of zombies holding it back, Seok-woo is forced to fight a zombified Yon-suk. Seok-woo is bitten during the fight, but he manages to throw Yon-suk from the train. Knowing he will turn into a zombie, Seok-woo quickly teaches Seong-kyeong how to operate the train, and then says a final goodbye to the devastated Su-an. Seok-woo works his way to the back of the train as he flashes back to the memories of his time with his daughter before throwing himself off the train just as he transforms.

Seong-kyeong and Su-an make it to a tunnel outside out of Busan before the track is blocked again by debris. The pair begin to walk through the tunnel towards the safety of Busan. On the other side of the tunnel, military snipers prepare to fire on them until they hear Su-an singing the song that she could not sing before. Realizing that Seong-kyeong and Su-an are survivors, troops rush into the tunnel to make sure they make it to the safety of Busan.