New York City restaurant manager Bill Firpo struggles every day with criminal tendencies that cause him to want to do wrong. When his brothers, liar Dave and kleptomaniac Alvin, are paroled early and placed into Bill’s custody during Christmas time, things go from bad to worse. Soon Dave and Alvin convince Bill to travel to the small town of Paradise to commit a bank robbery. However, getting out of Paradise during the Christmas holiday maybe the biggest challenge that the brothers have ever faced. 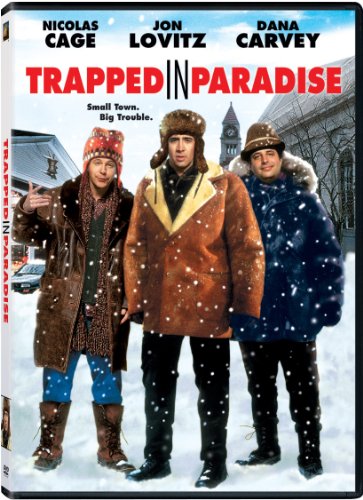 The summary below contains spoilers.
New York City restaurant manager Bill Firpo (Nicolas Cage) struggles every day with criminal tendencies that cause him to want to do wrong. When his brothers, liar Dave and kleptomaniac Alvin (Jon Lovitz and Dana Carvey), are paroled early and placed into Bill’s custody during Christmas time, things go from bad to worse. Dave and Alvin ask Bill to take them to Paradise, Pennsylvania to allegedly do a favor for a fellow inmate that helped the brothers out in prison. Bill is reluctant, since it would violate Dave and Alvin’s parole to leave the state, but ultimately agrees after Dave convinces Bill that he is linked to a robbery that Dave and Alvin committed. Now on the run, the brothers head off for Paradise.

The boys arrive in Paradise on the day of Christmas Eve. They are looking for a woman named Sarah Collins (Mädchen Amick), who they are informed works at the bank and is apparently the daughter of Dave and Alvin’s inmate friend. Once in the bank, Bill begins to suspect that the entire plan was a ruse to get Bill to agree to rob the bank. Bill, the brains of the outfit, notices that the security in the bank is very light, and that the bank appears to be flush with cash. The boys go to a nearby store and purchase ski masks and a change of clothes from the shop owners, Ed Dawson (John Ashton) and Clovis Minor (John Bergantine). They then enter the bank and attempt to rob it. However, they are informed by the bank president’s wife, Hattie Anderson (Angela Paton), that her husband, Clifford (Donald Moffat), has the only key and that he is at lunch across the street at the diner. Alvin and Bill cross the street to the restaurant and take Clifford and all the other restaurant patrons back to the bank. Clifford opens the vault, and Bill and Dave take $275,000 from the bank. Alvin drives off in the getaway car and leaves them standing in front of the bank, but Bill and Dave catch up to him a few blocks away.

This is your basic yoga, I learned it in prison. It’s good for stressful situations like this bank robbery, or if you’re ever in prison and you’re surrounded by ten men, helps relax you. Dave Firpo (Jon Lovitz)

After ditching the getaway car and their ski masks, the brothers attempt to get out of town, but Alvin gets them lost. A police car begins to follow them with lights and sirens and Alvin tries to get away. Alvin loses control of the car and crashes alongside a bridge. The police car fails to notice the crash and drives past the Firpo brothers. Another car comes along and the driver, Dick Anderson (Sean O’Bryan), offers to drive them back into Paradise. Dick informs them due to the winter storm all the roads out of town are now closed. Dick offers to take them to his relatives’ home, which turns out to be Clifford and Hattie’s house. Clifford and Hattie don’t recognize the brothers, but Sarah is a tenant of the Anderson’s and appears to be suspicious of the men. The Andersons treat the Firpo brothers with amazing generosity including giving them dry clothes, feeding them, and facilitating a ride to the bus stop for them. Clifford explains that the money stolen did not belong to the bank, but to the citizens of Paradise who saved their money throughout the year. Clifford tells the boys that the bank will likely have to close due to the robbery.

Meanwhile, inmate Vic Mazzucci (Vic Manni) hears about the bank robbery in prison. Vic is a former fellow inmate of Alvin and Dave’s and suspects that the brothers stole his idea for the robbery. Vic becomes enraged and breaks out of prison with another inmate, Caesar Spinoza (Frank Pesce). The two escaped convicts head to the Firpo home and kidnap the brothers’ mother, Edna (Florence Stanley). They threaten to kill Edna unless the brothers turn the stolen money over to them. Vic is also the father of Sarah, who changed her last name to avoid the connection with her father.

Soon after, the Firpo brothers are dropped off at the bus station to head back to New York. Before they can get on the bus, Clovis and Ed show up with guns and try to take the bag of money away from the Firpos. Clovis and Ed, although volunteer deputies, plan on keeping the money for themselves. Shots are fired, and in the chaos, the Firpos get away and Clovis and Ed are detained by federal officers led by Agent Shaddus Peyser (Richard Jenkins). Peyser is suspicious of Clovis and Ed and suspects that they may know more than they are letting on.

The Firpos next try to get out of town by boat and nearly drown. They then steal a horse and sleigh and outrun Peyser and the cops in the woods surrounding Paradise. In a nearby café, Bill decides that he can’t keep the money and plans to return it to the town. Alvin agrees with him, although Dave argues against it. During the argument, it is revealed that Bill is not wanted by police in New York and that Dave and Alvin scammed him to get him to take them to Paradise. Bill takes the bag of money and leaves his brothers behind. He gets a lift with the first car he finds heading to Paradise, which is the car that Vic and Caesar have stolen. Bill is unaware his mother is in the truck. Dave sees his brother get into the car with Vic and follows him in the sleigh with Alvin. During the car ride with Vic, Bill shows the escaped convicts a picture of his mother. Vic and Caesar try to shoot him which causes Bill to jump out of the car. Dave and Alvin rescue Bill with the sleigh.

The Firpos try to return the money to the bank but trigger the alarm. They come up with an alternative plan to leave the money with the church with a note to return it to the citizens of Paradise. Clovis and Ed come across them and hold them at gunpoint, demanding the money. Clovis and Ed take the Firpos back to the Andersons’ house believing that the money is hidden there. Suspicious of Clovis and Ed, Peyser and his men follow the two bumbling deputies. Once inside the Anderson home, Clovis, Ed, and the Firpos discover that they entire household is being held at gunpoint by Vic and Caesar who demand the money. Bill informs them that they gave the money back to the church. Outside, Peyser notices the license plate on the car that Vic stole and suspects that the escaped convicts maybe inside. Peyser orders Vic and Caesar to come out with their hands up. At the same time, one of the Andersons’ dinner guests, off duty deputy Timmy Burnell (Paul Lazar), grabs one of the convicts’ guns and a struggle ensues where Vic ends up being shot. Peyser and the cops break in and arrest everyone.

Back at the Sheriff’s office, Peyser tries to figure out what happened and who stole the money. He suspects that it was the Firpos, but the townspeople, specifically the Andersons, all lie to protect the three brothers. The church pastor (Gerald Parkes) and Sarah show up to the police station with all the money and return it. Peyser orders the brothers released but warns them that they should take advantage of the second chance that has been given them. The next day, on Christmas, Alvin and Dave return with their mother to New York while Bill decides to stay in Paradise with Sarah to begin a relationship and to open a new restaurant.