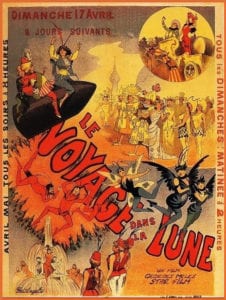 Arguably the best of Georges Méliès films, 1902’s A Trip to the Moon embodies what people love about his movies. They are imaginative and humorous with a narrative resembling something more theatrical than what other film makers of the day, who tended to embrace the tableau vivant style, created. Many of those films were thrown together with little plot or story.

Méliès makes the most of his skills as an illusionist to bring new special effects techniques to the silver screen such as substitution splices, multiple exposures, time-lapse photography, and dissolves. Add in the continuous movement of the actors with over-emphasized mime-gestures, and the result to a modern viewer is akin to watching a charming children’s book come to life.

The film, inspired by Jules Verne’s novels From the Earth to the Moon and Around the Moon, begins with Professor Barbenfouillis proposing an expedition to the moon during a meeting of his Astronomic Club. The debate on going to the moon is a fierce one as expressed by everyone’s vivid reaction, but go they do.

The club builds a big capsule in the shape of a bullet with an even bigger gun. The men climb into the bullet, and it’s shot into space by a troupe of sexy ladies. The capsule hits the moon made of cheese square in the eye.

The men get out of the capsule, and begin to explore. The atmosphere is the same as Earth’s, so there is no need for any sort of space suit. Regular clothing of the day is just fine.

Being an explorer is hard work, and the men decide to sleep. We are treated to a number of night time sights as they dream away; comets flying by, the Big Dipper, and Saturn to name a few.

Phoebe, the goddess of the Moon, makes it snow on the men, and they flee to take shelter in a cave covered in giant mushrooms. Here, they are attacked by a Selenite, an insect-looking inhabitant, but it explodes into a cloud of smoke when hit with force. Another after another attacks our explorers until they are overwhelmed and captured.

The town celebrates the explorer’s return home, and present the men with a commemorative statue. The film ends with everyone in smiles except for the Selenite who is taken away to be displayed at the local zoo.

While the implausible story of A Trip to the Moon might seem a bit silly by today’s standards, this 13 minute film exudes the excitement and charm of a new medium finding it’s way. Méliès film is one of the best examples of early movie-making magic, and the reason why it is the MHM Podcast Network’s January pick for the 12 Retro Movies Everyone Should See In 2017.

A Trip to the Moon Movie Review by Chris Haley

A group of Vaudevillian astronomers go on an expedition to the Moon.