Kevin Flynn is a current arcade owner, but former employee of the software corporation ENCOM. Flynn is attempting to find evidence of the theft of his intellectual property by his former company. When he breaks into the ENCOM building with two other programmers, Flynn is suddenly whisked away into the computer world where he is forced to compete in lethal computer games. To escape the computer world and return to his reality, he will be forced to join rebel programs in an attempt to free the cyberspace of the Master Control Program, an evil oppressive computer program that seeks to control both worlds. 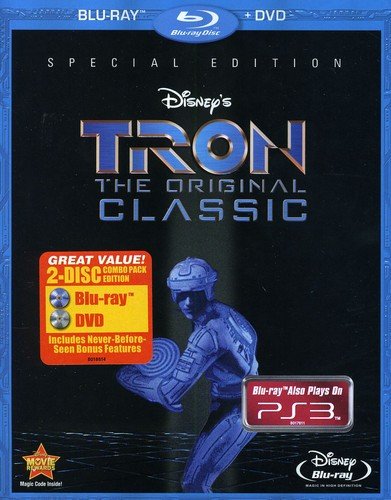 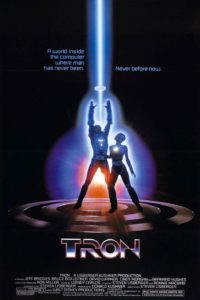 Kevin Flynn (Jeff Bridges) is a former software engineer for the computer corporation ENCOM. Flynn was fired by the corporation, who subsequently stole all of Flynn’s programs and made a fortune in the video game industry. Flynn has been spending his time since trying to hack into ENCOM’s mainframe system to find proof of his copyright. Additionally, he runs a successful video arcade on the side.

ENCOM’s mainframe system is controlled by the Master Control Program (MCP) (David Warner). The MCP has ambitions of taking over the computer world by acquiring programs from unwilling systems around the world. Programmer Alan Bradley (Bruce Boxleitner) and his girlfriend, engineer Dr. Lora Baines (Cindy Morgan) are both current employees at ENCOM. They become frustrated when they discover that the MCP has closed off their access to their projects. Alan confronts the senior executive vice president, Ed Dillinger (David Warner), about the MCP’s actions. Dillinger tells Alan that the security measures are to block outside hacking attempts. Dillinger confronts the MCP about the closure and discovers the program’s power-hungry plans to acquire more and more outside computer software in order to increase its own abilities. When Dillinger pushes back against the MCP’s plans, the program threatens blackmail against Dillinger for his plagiarizing of Flynn’s games.

Once inside ENCOM, the three split up. Flynn attempts to access the information he seeks, but he is detected by the MCP. The MCP uses an experimental laser to digitize and download Flynn into the ENCOM mainframe cyberspace, where all programs are living entities appearing as the likeness of their human programmers, or users. Flynn quickly learns that the MCP and its enforcer SARK (David Warner) rule the cyberspace and force programs to play computer games to the death. The MCP and SARK force Flynn to participate in the games.

While playing in the cyberspace tournaments, Flynn meets other captured programs, RAM (Dan Shor) and TRON (Bruce Boxleitner). The three agree to partner and escape into the mainframe during the light cycle match. However, Flynn and RAM are separated from TRON during the escape. Believing that his friends are dead, TRON continues on by himself. Flynn helps RAM who is injured in the escape. Flynn learns that he can manipulate portions of the mainframe due to him being a user. RAM recognizes Flynn as a user and encourages him to free the system before he dies. Flynn uses his user abilities to fly a ship and to impersonate one of SARK’s soldiers and boards SARK’s command ship.

Meanwhile, TRON enlists the help of YORI (Cindy Morgan), a sympathetic program. She helps him infiltrate an I/O tower where he communicates with Alan in the real world. Alan instructs TRON to destroy the MCP. Flynn and TRON reunite on the cyberspace sailer ship that TRON and YORI steal from SARK. SARK pursues and eventually overtakes the trio in his command ship. He destroys the sailer, captures Flynn and YORI, and presumably kills TRON, who actually survives the attack. SARK leaves the command ship and orders it’s deresolution, but Flynn keeps it intact by again manipulating the mainframe using his user powers.

SARK reaches the MCP’s core with a group of captured programs. The MCP attempts to absorb the captured programs when TRON arrives. TRON confronts SARK, and the two programs battle until TRON critically wounds SARK. The MCP, knowing that it is vulnerable, gives the shell of SARK some of its functions causing SARK to grow to extraordinary heights and allowing it to continue to battle TRON. Meanwhile, Flynn comes up with a plan to use his user powers to give TRON a chance to destroy the MCP. Flynn leaps into the MCP’s beam, distracting it, which allows TRON to throw his disc into the beam. The MCP and SARK are destroyed, which restores the mainframe to its previous state. All captured programs are once again allowed to communicate with their users.

Back in the real world, Flynn is reconstituted in the same place where he disappeared from. A print out proving Dillinger’s plagiarism emerges from a terminal nearby. The next morning, Dillinger enters his office and discovers the MCP is deactivated and proof of his theft revealed to the world. Sometime later, Alan and Lora wait for their new boss on top of the ENCOM building. Flynn arrives in a helicopter and greats his friends.