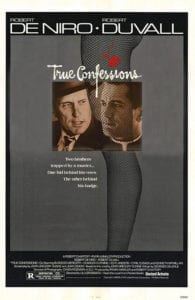 In the 1960’s, Detective Tom Spellacy (Robert Duvall) drives to a small town in the middle of the desert to visit his brother at a small run down church. Tom’s brother, Reverend Desmond Spellacy (Robert DeNiro) is the head priest at the church. Des is glad to see his brother, but regretfully has to tell him that he is dying. The two estranged brothers sit and reminisce about how their lives got there.

The film then returns to 1948. Des is a young and ambitious Roman Catholic monsignor in the Los Angeles archdiocese. Tom is a homicide detective with the Los Angeles Police Department who spent years on the take when he was a patrol officer, but does not do that any longer. The two brothers love each other, but rarely spend time together due to their mutual careers.

Des’ boss is the aging Cardinal Danaher (Cyril Cusack), who has great affection for Des and his ability to make hard decisions. Des has helped the Cardinal to rebuild the diocese after it was nearly bankrupt several years before. Des develops several church projects while keeping the underlying costs down. At the request of the Cardinal, Des reassigns the previous financial head of the diocese and Des’s mentor, Monsignor Seamus Fargo (Burgess Meredith), to a small desert parish. Des is also willing to make questionable deals and works with some shady men, such as construction mogul Jack Amsterdam (Charles Durning), who uses his Catholicism to make deals with the Church that benefit himself.

One day, Tom is assigned to investigate the brutal murder of a woman named Lois Fazenda (Amanda Cleveland) whose body was found cut in half in a vacant lot. The media sensationalizes the case and refers to Fazenda as “the Virgin Tramp” since she was a Catholic as well as a prostitute. Tom works the case with his partner, Frank Crotty (Kenneth McMillan), a cop who is still very much on the take working towards his retirement. Tom and Frank’s investigation leads them to Brenda Samuels (Rose Gregario), a local madam whom Tom is very acquainted with. Years before, Tom worked as a bagman for Amsterdam and had frequent encounters with Brenda who ran a whorehouse for Amsterdam. When things turned tough, Brenda was arrested and sent to prison, but Tom escaped any consequences.

During the investigation, Tom has lunch with Des. He encounters Amsterdam at the restaurant who stops by the table to talk to Des about a pending construction proposal. Tom provokes Amsterdam with details about his illicit business operations so that Des will know what kind of man Amsterdam truly is. As a result, Des tells the Cardinal the time has come to cut church ties with Amsterdam for good. Mutual friends of the Church as well as Amsterdam approach Des and tell him that splitting from Amsterdam is not easily done. One of the advisors, Sonny (Pat Corley), suggests that the Church present Amsterdam with a dinner and an award for Catholic “Layman of the Year” before cutting ties with the crime boss. Tom attends the dinner and starts a fight with Amsterdam out of frustration, accusing the boss of being sexually involved with Fazenda.

The next day, Tom continues the investigation and goes to Standard’s studio in the foothills. Once there, he finds the floor and a bathtub covered with dried blood and realizes that he has found the site where Fazenda was killed. Tom and Frank attempt to find Standard himself, but find out that he was killed in a car accident twelve hours after the murder. Frustrated, Tom wants to drag in Amsterdam for questioning simply to humiliate him in public but Frank talks him out of it. Tom’s investigation also reveals that Fazenda was also sexually involved with several other community leaders as well.

Meanwhile, Amsterdam’s lawyer, Dan Champion (Ed Flanders) tries to use Des to manipulate Tom into dropping the investigation. Champion reveals that Des knew the murdered girl as well, although they only met in passing. Nevertheless, Des’ involvement in the investigation of a murdered prostitute would likely destroy his reputation with the church. Champion insinuates that Amsterdam will assure that Des’ name comes up in the investigation if it continues to move forward. Des tells his brother what he knows and his involvement, and eventually, agrees with his older brother that it should not stop the investigation.

Tom continues on with the investigation, but still holds off on dragging Amsterdam in for questioning. However, when Brenda is found dead from an apparent suicide, Tom decides to detain Amsterdam and bring him down for interrogation. As a result, Des is brought in as well.

The film returns to the 1960’s. Des tells Tom that after the investigation, he asked to be relocated to the remote parish in the desert, the same place that Monsignor Fargo requested to go to. Tom tells Des that he carries incredible guilt for destroying Des’ career and reputation. Des informs his older brother that he regrets nothing and that Tom’s action were his salvation. He absolves his brother of any and all blame. The film closes with Des showing Tom the plot were he would like to be buried and asks Tom if he would be interested in being buried next to him when his time comes. Tom agrees as the credits begin to run.