Tucker and Dale are two best friends on vacation at their dilapidated mountain house. However, their good time come to a halt when a group of obnoxious, preppy college kids mistake them for murderous backwoods hillbillies. When one of the students gets separated from her friends, the boys try to lend a hand, but as the hilarious misunderstanding grows, so does the body count. 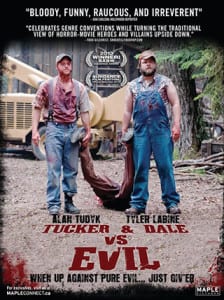 Tucker and Dale vs Evil starts with a group of college kids camping in the Appalachian Mountains of West Virginia. On a pit stop to get beer, the girls meet Tucker and Dale; two down-to-earth hillbillies that just bought a vacation house nearby. Dale becomes smitten with one of the girls, a hottie name Allison, but he ends up creeping her out. He has an inferiority complex, and his looks (along with a large scythe he’s holding) gets in the way.

The kids scamper off, and set up camp. Douchebag Chad tells the group a scary story about the “Memorial Day Massacre” that took place 20 years earlier in the very forest they are in where psychotic hillbillies like the two they just encountered attacked and killed everyone.

The only thing to do after a story like that is to go skinny dipping! The coincidentally pick the same spot where Tucker and Dale are fishing. As Allison strips, she sees the two men staring at her, and she falls and hits her head. Dale rescues her, but when the kids show up, they see her lifeless body, and run away in terror.

Now the fun begins…the smart college kids think that Tucker and Dale are going to kill them all one by one, but end up killing themselves one by one as one misunderstanding after another leads to their deaths. Tucker and Dale think the kids are all suicidal, but actually, Chad hunts and kills them one by one. During the melee, Tucker loses two of his bowling fingers. Allison and Dale fall in love, and we learn Chad is the prodigy of a rape victim and hillbilly attacker…right before he falls to his death.

In the end, Allison and Dale reveal their true feelings for each other, and they live happily ever after.