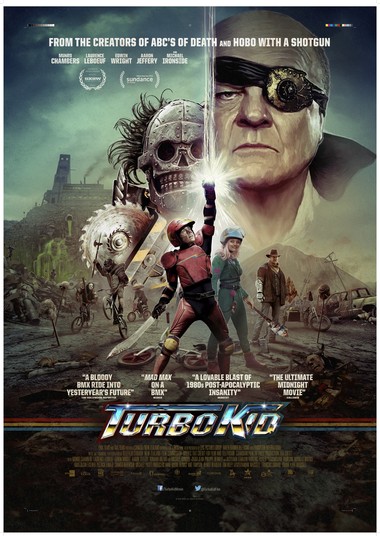 2015’s Turbo Kid is set in the post-apocalyptic world of 1997 in an area called “The Wastland.” It’s a place where a megalomaniac named Zeus rules. He makes his living by grinding his enemies and prisoners, and poor into water.

Here too lives a boy so simple that he’s only called The Kid. His sole method of transportation is his BMX he rides…just like his favorite comic book hero, Turbo Rider.

One day, The Kid meets an odd girl named Apple on some swings in the middle of nowhere. She follows him home because he dropped his comic book. He allows her to stay with him for a bit because he has a turbo boner for her.

One of Zeus’ men finds the two, and snatches Apple. The Kid runs from the minions, and ends up in the real Turbo Rider’s bunker where his remains decay. The Kid takes Turbo Rider’s armor and wrist-weapon thingy, and sets off to become the comic book hero by saving the lovely Apple.

We next meet Frederic, the bestest arm-wrestling cowboy in these here parts. He gets himself captured while trying to rescue his brother from Zeus, but Zeus is ready. He captures Frederic, cuts off his right hand, and then tosses him in a pit called the “Arena” where Apple happens to be. The Kid gets himself captured too, and tossed into the arena for a big reunion, but then the three hatch a big plan and manage to escape.

When Apple gets shot during the melee and survives, The Kid realizes she’s a robot. They go to a robot graveyard to get spare parts to repair her. Zeus’ minions eventually find them, but The Kid and Apple escape again. Apple gets decapitated this time, and The Kid repairs her by giving her a new robot body, but then he passes out from the toxic fumes in the air.

Later when The Kid wakes up, he finds that Frederic helped them escape, and he now has his own robotic hand to help whoop some ass, but he says that Apple can’t be reactivated.

The two return to Zeus’ compound for one last bit of revenge. Many of Zeus’ minions are killed, but The Kid gets captured. As he’s about to be killed, Apple shows up and saves him. Zeus then takes things into his own hands, and shoots our three heroes. The Kid is saved by some old View-Master discs that he keeps under his turbo suit, and kills Zeus’ last few minions. That wrist-weapon thingy is really handy.

When he tries to off Zeus, we learn that Zeus is, in fact, a robot. The Kid blows Zeus to bits with explosives, and Apple dies protecting The Kid from the blast.

The explosion reveals an underground water source, that will help the people of the Wasteland. The Kid buries Apple, and rides off into the apocalyptic sunset while Frederic stays behind to play waterman.