A secret war has raged between vampires and werewolves, otherwise known as Lycans, for thousands of years. An elite vampire assassin known as Selene finds herself drawn to a young human known as Michael Corvin after she finds several Lycans stalking him. When Michael is bitten by the Lycan leader reportedly killed centuries before, Selene finds herself drawn into political intrigue amongst the warring factions ultimately leaving her with no one to trust but Michael, who maybe the most dangerous person of all. 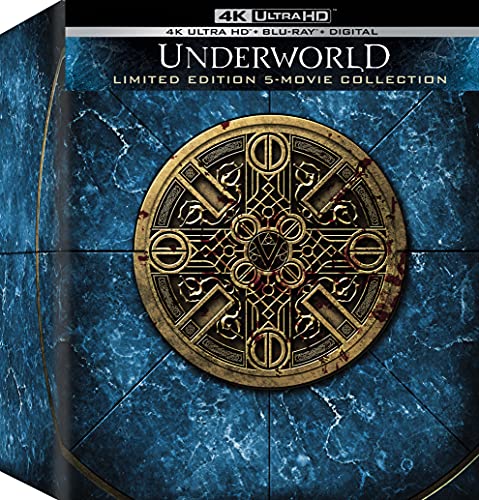 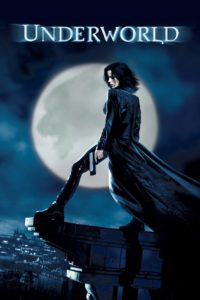 A secret war has raged between vampires and werewolves, otherwise known as Lycans, for thousands of years. In the modern era, the vampires have gained the advantage over the Lycans, after a vampire by the name of Kraven (Shane Brolly) killed the Lycan leader Lucian (Michael Sheen) 600 years before. As a result, Kraven becomes the second-in-command to the vampires’ triumvirate of elders, one of which leads at any given time while the other two slumber. Selene (Kate Beckinsale) is a Death Dealer, an elite vampire assassin. Selene seeks revenge against the Lycans who murdered her parents when she was a child decades before.

During a rainy night hunt of Lycans, Selene notices that a group of werewolves are stalking a seemingly ordinary medical student named Michael Corvin (Scott Speedman). Selene rescues Michael when the Lycans attempt to abduct him, which results in both her and Michael being stocked by a new group of Lycans, including Lucian who is very much still alive. Selene and Michael manage to escape, but Michael is bitten by Lucian during the escape. Selene and Michael save each other during the escape, ultimately ending with Michael losing consciousness. With the knowledge of Lucian still being alive, Selene comes to suspect that Kraven lied about killing the Lycan leader and may, in fact, be working with the werewolves.

Selene takes the unconscious Michael to the coven’s mansion. Kraven is angered with her for bringing Michael to the coven, aware of her attraction to the human and his own desire to have Selene as his future queen. Not sure who she can trust, Selene awakens a hibernating elder vampire and her mentor, Viktor (Bill Nighy), to seek his guidance. Viktor is angry with Selene for awakening him early and refuses to believe her speculations about Kraven’s loyalty. Viktor is also angry that his fellow elder Marcus, who was supposed to be the next to be awoken, remains asleep. Viktor informs Selene that she will face the judgement of the council for her actions. Michael awakens in the coven and is startled by the other vampires and escapes the mansion.

Selene takes Michael to a hidden vampire interrogation room and ties him up, fearful that the Lycan bite will transform him. Michael remains untransformed despite having hallucinations passed on to him by Lucian’s bite but Selene fears that the transformation may still occur when the full moon rises. The two bond and Selene reveals some of her past, including that Viktor adopted her and turned her into a vampire himself. Selene leaves Michael in the interrogation room with a silver bullet in case he transforms. She then returns to the coven where she is locked up for her insubordination.

That night, the train bringing vampire elder Amelia (Zita Görög) arrives in the city. The train is ambushed by Lycans. All the vampires are killed, and Amelia’s body is drained of blood. At the same time, Erika (Sophia Myles), a female vampire courtesan who desires Kraven’s favor, releases Selene from her imprisonment. Selene immediately runs to Michael and releases him. They are attacked by a team of Lycans. Michael is also captured by the Lycans and taken back to Lucian. During the transport to the Lycan den, Michael begins to transform.

Not long after, Selene manages to capture and abduct the Lycan scientist Singe (Erwin Leder) and takes him back to the vampires’ mansion. Singe reveals to Selene and Viktor that Selene was correct about Kraven’s betrayal. He also reveals that the Lycans are pursuing Michael because he is a direct descendant of Alexander Corvinus, the person who was the origin point for both the vampire and Lycan bloodlines. As an heir to the bloodline, Michael carries a unique genetic strain that could allow him to become a hybrid. Singe reveals that Lucian plans to inject himself with the blood of Michael and Amelia and make himself a vampire-Lycan hybrid, which is stronger than both. When Viktor learns of Amelia’s murder, he kills Singe and orders Selene to kill Michael.

While being held in the Lycans’ lair, Lucian’s memories reveal to Michael that the Lycan leader was once in love with Viktor’s daughter Sonja (Jázmin Dammak) decades before. However, when the vampire elder learned of his daughter’s illicit affair, Viktor murdered her. The memories also reveal that the Lycans were once slaves of vampires, and the war began when the Lycans revolted against the vampires and fought for their freedom. Kraven arrives at the Lycan den and discusses the plan with Lucian.

The vampire soldiers, including Selene and Viktor, arrive at the Lycan den. Kraven shoots Lucian with a silver nitrate bullet so that the Lycan can’t dig out the bullet. When Michael tries to escape, Kraven shoots him as well. Selene arrives and Kraven tells her the true story of how her parents were killed. Viktor killed her parents, but then turned her because she reminded him of Sonja, the daughter he murdered. Kraven demands that Selene go with him, which she refuses. Kraven raises the gun to shoot the struggling Michael a second time, but the dying Lucian rises to stab him with a sword. Lucian tells Selene to bite Michael so that he can become the hybrid. Selene bites Michael and he becomes a more powerful hybrid. Kraven finishes off Lucian before retreating to the coven.

Viktor and Michael battle, with Viktor seemingly getting the upper hand on the younger man. Selene jumps into the fray and cuts the head off of Viktor with his own sword. Selene and Michael flee the Lycan lair, now enemies of both the vampires and the Lycans. Back at the coven, Marcus, now the sole surviving vampire elder, awakens after Singe’s blood seeps into his sarcophagus.