In writer and director Jordan Peele’s second horror film, the Wilson family (Addy, Gabe, Zora, and Jason) go on vacation in the beach community of Santa Cruz, California. Mother Addy is uneasy with the trip after her life was forever changed when she visited the seaside town years before and encountered a doppelgänger of herself in the boardwalk funhouse. Now, the Wilson family is terrorized when a mysterious family of visitors who all look like them suddenly appear from nowhere and attempt to take over their lives. 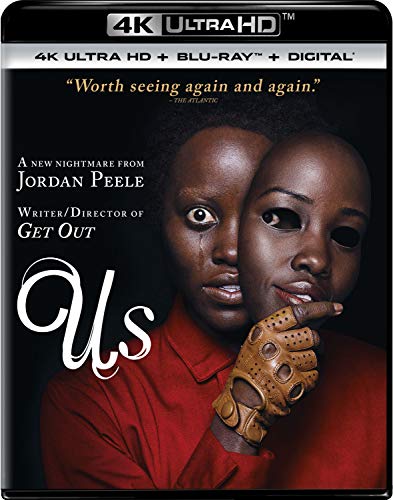 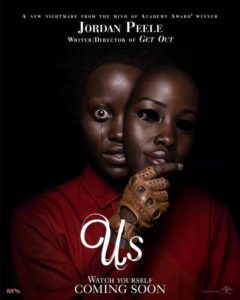 The film begins by describing all the underground tunnels there are in existence around the world. It then jumps to 1986 where a young girl named Adelaide “Addy” (Madison Curry) goes to the Santa Cruz Beach Boardwalk on a trip with her parents Rayne and Russell (Anna Diop and Yahya Abdul-Mateen II). At night, she wanders away from her inattentive father and enters a funhouse located on the beach. Inside, she encounters an exact doppelgänger of herself in the house of mirrors portion of the funhouse. Addy lets out a scream before the film cuts away. The audience is later shown that Addy refuses to talk as a result of this incident and her parents, unaware of what happened to their daughter, begin to worry.

Years later, an adult Adelaide Wilson (Lupita Nyong’o), now married with two children of her own, returns to the same area for a vacation. Addy’s husband, Gabriel “Gabe” Wilson (Winston Duke), is unaware of Addy’s traumatic incident as a child. Addy is nervous about the trip despite her husband’s enthusiasm. She begins to have flashbacks of her childhood after the incident in the funhouse. Her daughter Zora (Shahadi Wright Joseph) is more interested in her phone than the vacation and her son Jason (Evan Alex) hides behind a monster mask most of the time. Gabe insists that the family meet with their friends Josh and Kitty Tyler (Tim Heidecker and Elisabeth Moss) and their twin daughters Becca and Lindsey (Cali Sheldon and Noelle Sheldon) at the beach near the funhouse. On the way to the beach, the family passes paramedics taking away a body of an old man with blood on his chest. At the beach, Jason wanders away near the funhouse and sees a man who looks strangely like the old man with blood on his hands.

Later that night, Addy tells Gabe about her childhood incident in the funhouse mirrors which Gabe blows off as a young Addy fearing her own reflection. They are interrupted by Jason informing the couple that a mysterious family is standing in the driveway. The family are all dressed in red jumpsuits and act unusual. Eventually, the mysterious family breaks into the house and the Wilson family is shocked to see that they are exact doppelgängers of the themselves. Addy’s double is known as Red, Gabe’s double is Abraham, Zora’s sadistic double is Umbrae, and Jason’s scarred pyromaniac double is known as Pluto. Red is the only one who speaks as the other merely make noises. Red explains to the Wilson family that they are called the Tethered and that they share a soul with their lookalikes.

They look exactly like us. They think like us. They know where we are. We need to move and keep moving. They won’t stop until they kill us… or we kill them. Adelaide Wilson (Lupita Nyong’o)

Red goes on to explain that they have come to untether themselves from the surface dwellers. Red describes how while Addy lived a life of comfort and joy, Red lived an altered mirrored life full of pain and suffering. Red explains that she learned of Addy’s existence during the funhouse incident when they were children, and Red has grown to hate Addy. The Tethered separate with each of their counterparts. Umbrae plays a psychotic game of chase along the roadway with Zora Abraham takes Gabe out into the bay via boat, presumedly to kill him, but Gabe manages to escape. Jason learns that Pluto seemingly wants to play and mirrors everything that Jason does, which allows Jason to escape. Addy is handcuffed to a table by Red but breaks free when Red goes to check on Pluto. Eventually, the Wilson family is reunited, and they escape together on the boat when Gabe returns.

Meanwhile, the Tyler are suddenly attacked and murdered by their own doppelgängers while their lounging in their home. The Wilsons arrive and tie up at the Tyler’s dock and walk into the carnage. The Wilsons as a unit fight off the Tyler Tethered with Addy killing Becca’s doppelgänger herself. The Wilson family turns on the television and discovers that Tethered persons are appearing all across the United States and killing people. They are also linking hands and forming a large human chain. The Wilsons decide to take the Tyler family car and drive to Mexico. While they are leaving, Umbrae reappears and climbs on top of the car. Zora drives the car at a high rate of speed and then slams on the brakes sending Umbrae flying off the car. The doppelgänger is impaled on a tree branch and dies.

Early the next morning, the Wilson drives through Santa Cruz and finds the townspeople all murdered. They also discover that the road out of town is blocked by a burning car. Jason realizes that it is a trap set by Pluto and tells everyone to get out of the car. Jason gets Pluto to mirror him which prevents the pyromaniac from lighting the Wilsons car on fire. As Jason backs away, Pluto does the same and walks into the burning blockade, killing himself. Red suddenly appears, grabs Jason, and takes him into the funhouse. Abby pursues them, desperate to get her son back. She finds a secret entrance in the funhouse that leads to an underground facility that is overrun with rabbits. At the same time, Zora and Gabe wait in an abandon ambulance and observe the Tethered linking hands through Santa Cruz.

Underground, Abby finds Red in a classroom. Red informs her that the Tethered are artificial beings created by the government to control the originals on the surface. However, the control experiment failed and the Tethered were abandoned underground where they were condemned to continuously mimic the actions of the surface counterparts and survive on raw rabbit meat. After the incident in the funhouse with Abby, Red realized that she was different from the others and organized them to escape to the surface world and to murder their counterparts. Abby and Red begin to fight each other, with Red fighting almost in the form of a ballet. Although she is losing the fight, Abby manages to impale Red with a fireplace poker before breaking Red’s neck. Abby then rescues Jason from a nearby locker before returning to the surface.

Once reunited with Gabe and Zora, Addy drives the family away towards Mexico in the abandoned ambulance. As she drives, she recalls the night in the funhouse when she was a child. It is revealed that Red strangled the young Addy unconscious and then took her to the hidden facility below the surface. Once there, Red handcuffed Addy to a bed and took her clothes before returning to the surface world and taking over young Addy’s life. Eventually, Red learned to speak and adjusted to the surface world, while the imprisoned Addy became the monster that led the Tethered to the surface. Jason looks at his mother suspiciously, implying that he knows the truth.

The film ends with an aerial shot of the Tethered forming a human chain across the United States. The human chain replicates the Hands Across America demonstration of 1986, an image of which was on Addy’s shirt when she was kidnapped by Red as a child.