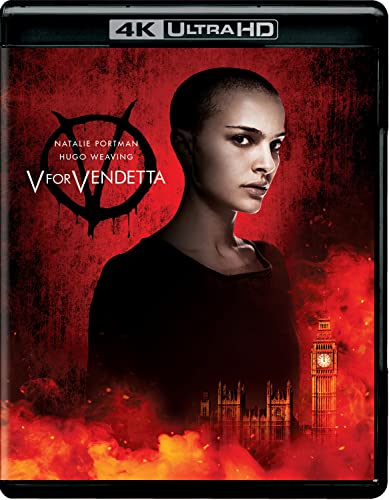 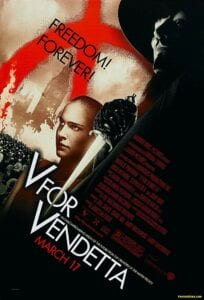 V for Vendetta is based on the most successful graphic novel up until that time, this is the story of a right-fighting anarchist in post-civil war London after Great Britain has descended into chaos and dictatorship in the not-so-distant future.

Let me humbly bow to let our Guy Fawkes-masked and all-black attired hero introduce himself:

“But on this most auspicious of nights, permit me then, in lieu of the more commonplace sobriquet, to suggest the character of this dramatis persona. Voila! View the humble vaudevillian veteran cast vicariously as both victim and villain by the vicissitudes of fate. This visage, no mere veneer of vanity, is a vestige of the “vox populi” now vacant, vanished. However, this valorous visitation of a bygone vexation stands vivified, and has vowed to vanquish these venal and virulent vermin, to vanguard and vouchsafe the violently vicious and voracious violation of volition. The only verdict is vengeance; a vendetta, held as a votive not in vain, for the value and veracity of such shall one day vindicate the vigilant and the virtuous. Verily this vichyssoise of verbiage veers most verbose, so let me simply add that it’s my very good honor to meet you and you may call me V.”

At which point we watch V blow up The Old Bailey building in downtown London on the Fifth of November to start a revolution against the totalitarian governmental rule. He promises the nation that he will blow up the Parliament building one year from now, then kidnaps-slash-disappears with Evey Hammond, the daughter of captive and executed radicals, who is neither strong enough nor insane enough to believe overthrowing the dangerous government is possible.

Through gentle speech, then murder of high party officials, then forceful imprisonment and torture, V teaches Evey how overcoming fear of death can liberate even the most fearful into action. Chief Detective Finch starts to believe there is a correlation between V’s increasingly bold but specific terrorist activities and the potential of a gigantic governmental cover-up of multiple terrorist attacks that put the current regime into power.

The government’s increasing paranoia begins to guide both Finch and Evey to believe V really is doing the right thing by attempting to symbolically blow up Parliament on the upcoming November the 5th. Will V get away with his crescendo of violence? Or will the government find V and make an example of him for all to see how fascism works against its own.

See V for Vendetta to find out.