In this sequel to Venom, the story picks up a year after the last film. Eddie Brock and Venom continue to have conversations with the notorious serial killer Cletus Kasady. Venom is able to determine the locations of the bodies for some of Kasady’s unknown victims. The discovery accelerates Kasady’s execution date. Prior to the execution, Brock and Kasady get into a fight where Brock is bitten by Kasady and inadvertently passes a second symbiote to the killer. Now, Kasady and his symbiote, Carnage, begin a rampage throughout San Francisco seeking revenge against those he believes have wronged him, including Brock. 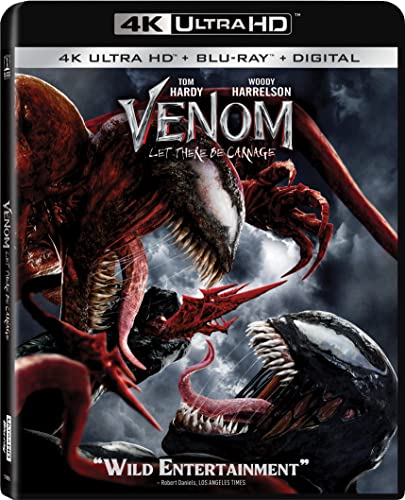 In 1996, a young Cletus Kasady (Jack Bandeira) is committed to the St. Estes Home for Unwanted Children. One night, Kasady’s one true love, Frances Barrison (Olumide Olorunfemi), who can project overwhelming sound waves, is removed from the facility and taken to the Ravencroft Institute. While being transported, Frances uses her sonic scream powers to escape and attacks a rookie police officer Patrick Mulligan (Sean Delaney). Mulligan’s ears are injured due to the sonic scream. In an act of self-defense, Mulligan shoots Frances through the eye. Mulligan believes that Frances is killed, but she is taken to the Ravencroft facility where she is treated for her injuries and kept in a special cell.

In the present day, Mulligan (Stephen Graham) has become a detective. Mulligan contacts Eddie Brock (Tom Hardy) at the request of the now infamous serial killer Cletus Kasady (Woody Harrelson). Kasady is scheduled to be executed and refuses to talk to anyone other than Brock after their interview at the end of the previous Venom film. The police are hoping that Brock can gather information as to the unsolved murders that Kasady may have committed. However, Kasady remains coy and does not explicitly tell Brock anything. However, Brock’s symbiote, Venom (Tom Hardy), is able to figure out where Kasady has hidden the bodies of some of the victims based on the drawings in Kasady’s cell. Brock’s revelation in his story gives Brock a much-needed career boost.

Not long after, Brock is contacted by his ex-fiancée Anne Weying (Michelle Williams) to meet for dinner. At the dinner, Anne reveals that she is engaged to Dr. Dan Lewis (Reid Scott), Anne’s boyfriend from the first film. Brock and Venom are both displeased with the news and leave suddenly. At the same time, the publicity of the newly discovered bodies of Kasady’s victims causes the Governor of California to order Kasady’s execution to proceed as planned.

I have tasted blood before. And that is not it! Cletus Kasady (Woody Harrelson)

Kasady invites Brock to his execution. Brock has no interest in witnessing the execution, but he does go to have one last conversation with Kasady. The serial killer expresses his disappointment in Brock for authoring his story about him and provokes Brock into attacking Kasady. During the attack, Kasady bites Brock’s hand and accidentally ingests part of the symbiote. Brock leaves and returns home where he proceeds to fight with Venom over the symbiote wanting more freedom to eat criminals. Brock and Venom decide to go their separate ways, believing that each of them will do better without the other. Venom detaches and begins jumping from one body to another.

Back at the prison, Kasady’s execution proceeds as planned. However, the lethal injection is blocked by a new symbiote named Carnage who frees Kasady and gives him enhanced powers like Venom. Carnage rampages through the prison freeing his fellow inmates and killing the prison guards. Carnage seeks to kill his father, Venom, and Kasady agrees to help him if Carnage will help Kasady free Frances from Ravencroft. A brief time later, Mulligan visits Brock at his home and warns him about Kasady’s escape. At the same time, Kasady frees Frances from Ravencroft, and the couple travel to their old children’s home to burn it down.

Mulligan takes Brock to the police station, as he is suspicious of the reporter due to his interactions with Kasady before the attempted execution. Mulligan attempts to interrogate Brock. Brock refuses to answer any questions and contacts Anne to represent him as a lawyer. Brock tells Anne that Venom has separated from him, and he needs her help to locate the missing symbiote to fight Carnage. Meanwhile, Venom continues to jump bodies, but ultimately ends up in Mrs. Chen (Peggy Lu), Brock’s friend at the market. Anne finds Venom there and convinces him to bond with her so that she can smuggle Venom into the police station so that they can break Brock out of the police station. Afterwards, Brock and Venom settle their differences and bond again.

A short time later, Kasady takes Mulligan hostage as a gift for Frances, and Frances captures Anne after she fails to find Brock himself. During the abduction, Frances gives Lewis information on Anne’s whereabouts so that he can tell Brock and Venom where to find Carnage. Kasady and Frances take their hostages to a cathedral where they plan to get married before killing Venom. Brock and Venom arrive during the ceremony. Venom is initially reluctant to fight Carnage, but after Brock promises to allow the symbiote to eat as many bad guys as he wants, Venom agrees to take on Carnage. Venom and Carnage fight, but Venom is eventually overpowered.

Carnage takes Anne to the top of the cathedral where he plans to kill her. Venom and Brock realize that Kasady and Carnage are not as bonded as they are. They renew their attack. Venom rescues Anne and provokes Frances to use her powers again which causes the symbiotes to separate from their hosts. All parties and the roof of the cathedral collapse into the church. A falling bell kills Frances. Venom saves Brock by bonding with him before the impact. Carnage and Kasady are physically separated, and Venom eats the symbiote before it can re-bond with Kasady. Kasady and Brock talk. Kasady tells Brock that he only wanted to be his friend. Venom and Brock respond by biting Kasady’s head off. Immediately afterwards, Brock, Venom, Anne, and Lewis flee the cathedral while a still-living Mulligan eyes flash blue.

Brock and Venom are now fugitives and go on the run. They flee to Mexico for a “vacation” where they can decide what they will do next. Venom tells Brock about the symbiotes’ collective knowledge of the universe and alternative realities. Before Venom can share that knowledge with Brock, a blinding light transports them from their hotel room to another room in the Marvel Cinematic Universe. Brock and Eddie see a news report on television by J. Jonah Jameson (J.K. Simmons) announcing to the world that Spider-Man’s secret identity is Peter Parker (Tom Holland). Venom shows extreme interest in the wall-crawler and hints at a future confrontation.