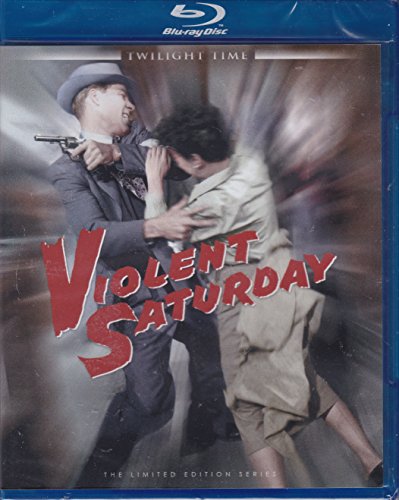 French label Carlotta Films has revealed that it is planning to bring the crime drama Violent Saturday at Blu-ray this April.  The film is directed by Richard Fleischer and stars Victor Mature, Richard Egan, Lee Marvin, and Stephen McNally.  Violent Saturday will hit stores on Blu-ray on April 3, 2013.

The film, set in a mining town, depicts the planning of a bank robbery as the nexus in the personal lives of several townspeople.  Three men decide to rob a bank, but things go terribly wrong and they trigger a series of crises.  The screenplay is written by Sydney Boehm and was based on the book by William L. Heath.  Ernest Borgnine and Sylvia Sidney co-star in the film.

Violent Saturday was released in April 1955 and grossed over $1.25 million at the box office.

Disclaimer: Affiliate links are contained in this post. This means when you click a link, and purchase an item, Movie House Memories will receive an affiliate commission. Advertisers and Affiliate Partnerships do not influence our content. See our Terms of Use about the inclusion of affiliate links on this site for more information.
January 14, 2013
389 1 minute read
Show More
Subscribe
Login
0 Comments
Inline Feedbacks
View all comments
Most Recent Posts
Facebook Twitter LinkedIn Tumblr Pinterest Reddit
Back to top button
Close
wpDiscuz
0
0
Would love your thoughts, please comment.x
()
x
| Reply
Close