Lieutenant Parker Barnes is a former police officer who has been sentenced to prison for killing innocent bystanders in his relentless pursuit of the serial killer that killed his family. Barnes now assists law enforcement by volunteering to participate in a virtual reality investigation of a computer program designed to be a serial killer. When the killer program escapes to the real world, Barnes is recruited to track him down and place him back into the VR world before he can wreak havoc. However, when Barnes learns that the profile of the serial killer that killed his family is part of the computer program, what effect will that have on the former police officer’s psyche? 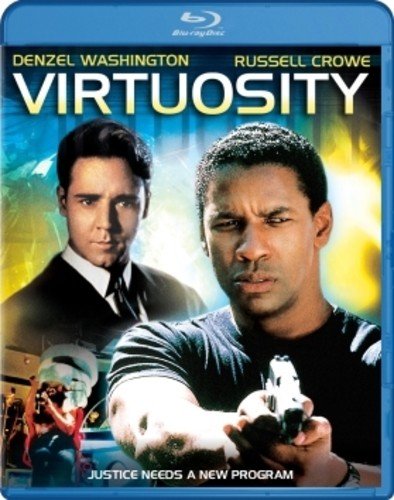 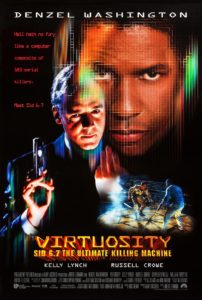 In Los Angeles of the future, Lieutenant Parker Barnes (Denzel Washington) and John Donovan (Costas Mandylor) are tracking down a serial killer named SID 6.7 (Russell Crowe) in a virtual reality program. SID is short for Sadistic, Intelligent, and Dangerous. It is a virtual reality amalgam of the most violent serial killers throughout history. SID gets the upper hand in the program and shocks Donovan, killing him in both the VR world as well as the real world. The VR program is overseen by Commissioner Elizabeth Deane (Louise Fletcher) and her associate William Wallace (William Fichtner), although it is created by Dr. Darrel Lindenmeyer (Stephen Spinella). After the death of Donovan, Deane orders Lindenmeyer to shut the project down. Barnes is brought back to the real world and returned to his cell. Barnes is a former police officer imprisoned for killing political terrorist Matthew Grimes, who killed Parker’s wife and daughter. When Barnes killed Grimes, he inadvertently killed some innocent bystanders. As a result, Barnes was convicted and sent to prison for a term between seventeen years to life. Barnes volunteers for the VR simulation to increase his likelihood of getting out at seventeen years.

Due to Barnes’ law enforcement background, he is not popular in prison. He gets into a fight with another inmate named Big Red (Gordon Jennison Noice). As a result, Barnes is forced to meet with criminal psychologist Dr. Madison Carter (Kelly Lynch). Meanwhile, Lindenmeyer informs SID that he has been ordered to shut down his program due to the fail-safe having been tampered with by SID. SID suggests that Lindenmeyer to take the next step in VR and try to bring a VR program to the real world. Lindenmeyer convinces another employee, Clyde Reilly (Kevin J. O’Connor), that a virtual reality prostitute, Sheila 3.2 (Heidi Schanz), can be brought to life. Lindenmeyer replaces the Sheila 3.2 module with the SID 6.7 module. Clyde inadvertently brings SID to life, who immediately kills Clyde. Lindenmeyer escapes the lab and goes into hiding, while SID begins to explore the world around him.

Once the corporation learns of SID’s escape into the real world, Deane and Los Angeles Police Department Chief William Cochran (William Forsythe) offer Barnes a deal. If Barnes captures SID and returns him to the virtual reality world, he will be released from prison. Barnes agrees to the deal and is assisted by Carter in his investigation. They soon discover that Grimes’ personality is part of SID’s programming which makes the manhunt more personal for Barnes.

At the same time, SID heads to a local nightclub, the Media Zone, where he takes the club goers hostage. Barnes and Carter head to the nightclub to stop SID, but the homicidal program escapes. However, SID learns that he can withstand damage and repair himself using glass as restoration material. The next day, SID begins a killing spree at the Olympic Auditorium until Barnes arrives to capture him. The two confront each other on a train platform. SID holds another person hostage, and it appears to nearby witnesses that Barnes kills the hostage in order to get to SID. Barnes is pulled from the investigation and law enforcement prepares to transport him back to prison.

Carter does not believe that Barnes would kill an innocent and tries to prove his innocence. At the same time, SID takes over Barnes’ transport vehicle and frees the former policeman before he can get to prison. SID escapes, and Barnes is blamed for his own escape. Wallace and Deane order Barnes to be terminated via a fail-safe transmitter implanted in him. However, Cochran destroys the transmitter after learning from Carter that Barnes did not kill the hostage on the train platform.

Meanwhile, SID kidnaps Carter’s daughter Karin (Kaley Cuoco) and takes over a television studio. Lindenmeyer comes out of hiding and sees what SID is doing. The programmer is impressed by what his creation is doing. However, Carter takes Lindenmeyer hostage in order to free her daughter. Barnes tracks SID down on the top of roof of the studio building. The two battle, but SID refuses to reveal where Karin is hidden. Barnes destroys SID, and they place him back in the VR world. They come up with a plan to trick SID into revealing Karin’s location by having SID defeat Barnes in the VR world. SID rages when he learns he has been placed back into his box. Cochran lets Carter out of the VR reality, but Lindenmeyer kills Cochran before he can release Barnes from SID’s world. Barnes starts to go into the same shock that Donovan experienced at the beginning of the film, but Carter kills Lindenmeyer and saves Barnes.

Barnes and Carter return to the roof of the television studio building and discover Karin hidden in a water tower. However, SID has booby trapped Karin so that Barnes cannot remove her without killing her. As the bomb begins to tick down, Barnes outsmarts SID and frees her from the bomb. After Karin is saved, Barnes destroys the SID program.