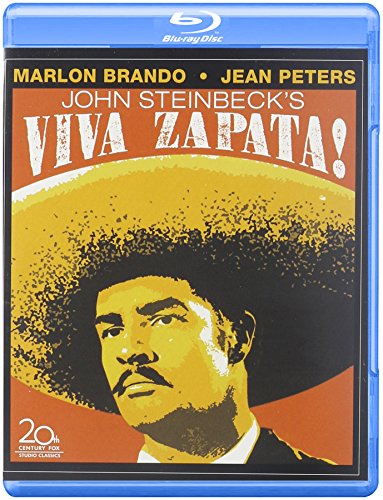 20th Fox Century Fox Home Entertainment has announced that it will release Viva Zapata! onto Blu-ray this Spring. The film was directed by Elia Kazan and is based on a screenplay by John Steinbeck. Viva Zapata! stars Marlon Brando, Jean Peters, Anthony Quinn, and Joseph Wiseman. The historical drama will be available online and in stores beginning on May 7th.

The film tells about the life and times of the legendary Mexican revolutionary Emiliano Zapata. Marlon Brando, fresh from his success in A Streetcar Named Desire, gives a stunning portrayal of the outlaw turned revolutionary leader. The film also boasts Anthony Quinn’s 1952 Best Supporting Actor Oscar-Winning performance as Zapata’s brother.Viva Zapata! is one of the classic political movies and another fine example of Brando’s genius as a film actor.

Disclaimer: Affiliate links are contained in this post. This means when you click a link, and purchase an item, Movie House Memories will receive an affiliate commission. Advertisers and Affiliate Partnerships do not influence our content. See our Terms of Use about the inclusion of affiliate links on this site for more information.
March 16, 2013
1 minute read
Show More
Back to top button
Close
Close