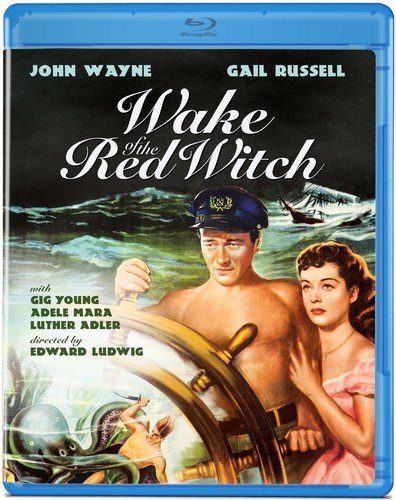 Wake of the Red Witch [Blu-ray]

In the film, Wayne battles enemies above and below the waves-including a giant killer octopus. This sprawling epic adventure pits the tough-minded Captain Ralls (Wayne) against the treacherous Captain Sidneye (Luther Adler) in a bitter rivalry on a South Seas isle. At stake is a fortune in pearls hidden in an underwater cave. At risk is the hand of the beautiful Angelique (Russell), daughter of Desiax, the tyrant ruler of the island who plans to marry her off to Sidneye. In an attempt to rescue Angelique, Ralls must seize the pearls and exchange them for her freedom. The danger continues as fate holds on final test of strength for the bold Captain and the woman he loves.

Wake of the Red Witch was released in March of 1949. Exact technical specs and supplemental features to be included with this upcoming release are yet to be officially detailed.

Disclaimer: Affiliate links are contained in this post. This means when you click a link, and purchase an item, Movie House Memories will receive an affiliate commission. Advertisers and Affiliate Partnerships do not influence our content. See our Terms of Use about the inclusion of affiliate links on this site for more information.
February 18, 2013
363 1 minute read
Show More
Subscribe
Login
0 Comments
Inline Feedbacks
View all comments
Most Recent Posts
Facebook Twitter LinkedIn Tumblr Pinterest Reddit
Back to top button
Close
wpDiscuz
0
0
Would love your thoughts, please comment.x
()
x
| Reply
Close