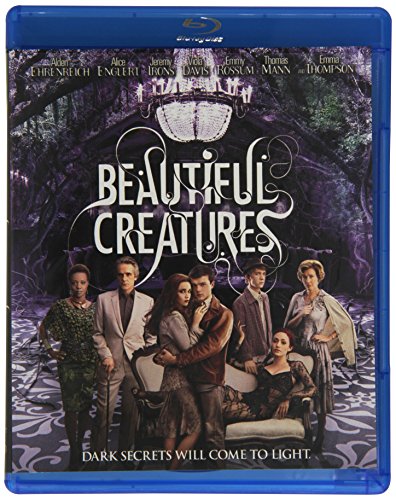 Warner Bros. Home Entertainment has announced that they will release a Blu-ray/DVD/UltraViolet Combo Pack of Beautiful Creatures this May. The film, which is based on Kami Garcia and Margaret Stohl‘s young adult novel of the same name, is directed by Richard LaGravenese. The supernatural romance saga stars Alice Englert, Alden Ehrenreich, Jeremy Irons, Emma Thompson, Viola Davis, and Emmy Rossum. Beautiful Creatures will be available in stores and online beginning on May 21st.

In the film, when newcomer Lena Duchannes (Englert) arrives in the small town of Gatlin, she quickly captures the attention of Ethan Wate (Ehrenreich), who only wants to escape what he views as a boring and dead end town. He quickly gets more than he bargained for, though. Lena possesses strange powers that have long kept her at a distance from others in her life. Lena and Ethan are drawn together, but their budding romance is threatened by the dangers posed by Lena’s existence as a “caster” and her family’s Dark powers. More distressing, though, it’s what’s coming. Upon her sixteenth birthday, Lena must undergo the Claiming, a process that will decide her fate forever: Light or Dark.

Beautiful Creatures was released in February of 2013 and grossed just over $19 million at the box office. Warner Bros. had hoped that the film would warrant a sequel, but that seems unlikely at this time.

Disclaimer: Affiliate links are contained in this post. This means when you click a link, and purchase an item, Movie House Memories will receive an affiliate commission. Advertisers and Affiliate Partnerships do not influence our content. See our Terms of Use about the inclusion of affiliate links on this site for more information.
March 28, 2013
1 minute read
Show More
Back to top button
Close
Close