Perennially picked-on high school nerds Gary and Wyatt are sick of their status at the bottom of the social food chain. Using Wyatt s computer, the two hatch a plan to create their dream woman and following a massive power surge, that woman unexpectedly appears in the form of Lisa. Gorgeous, intelligent, and blessed with limitless magic powers, Lisa makes the boys dreams come true, but what about Wyatt’s gun-toting psycho older brother Chet and the two bullies determined to put them back in their place? 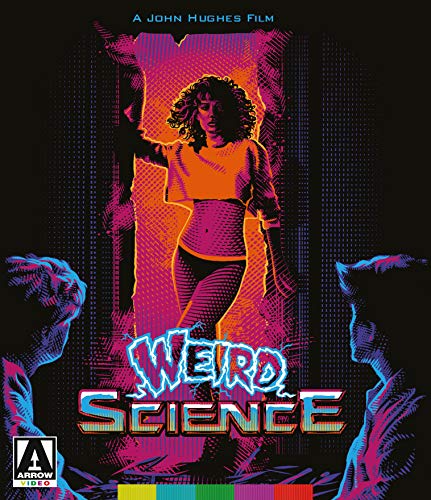 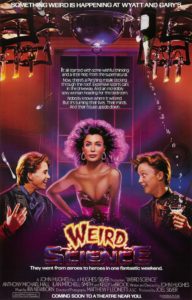 As two high school nerds, Gary Wallace (Anthony Michael Hall) and Wyatt Donnelly (Ilan Mitchell-Smith), ogle their cheerleader dream girls, Deb (Suzanne Snyder) and Hilly (Judie Aronson), in the school’s gym, two seniors, Ian (Robert Downey Jr.) and Max (Robert Rusler), pants them in front of all the girls. Humiliated, the boys head to Wyatt’s house where his parents are out of town for the weekend.

As the boys watch Frankenstein on TV, Gary gets the hot idea to create a virtual woman using Wyatt’s computer. They hack into a government computer for more processing power and feed it data and photos to make their perfect dream woman. Gary then attaches electrodes from the computer to a doll like Frankenstein did to his monster. Suddenly, a huge power surge hits the town, and a beautiful and intelligent woman named Lisa (Kelly LeBrock) is born. So the boys do what any boy would do in that situation—they take an awkward shower with her.

Lisa then decides they should hit the town. She conjures up a pink Cadillac and they all head to a dive bar in Chicago. There, she uses her powers to create fake ids for the boys and tells them to mingle. After much more awkwardness, they return home drunk and find Wyatt’s dick-head older brother, Chet (Bill Paxton), there who’s supposed to watch the boys for the weekend. Wyatt hides Lisa from Chet—much to her dismay—as Chet extorts money from Wyatt to keep him from telling their parents about his drunk night.

The next day at the mall, Max and Ian pour an Icee over the boy’s heads in front of everyone while Lisa shops for seductive underwear. Deb and Hilly aren’t impressed with their actions. Humiliated, the boys head back to their car. Lisa spots Max and Ian and flirts with them as they pass her on an escalator in an attempt to get them to follow her. Once she gets outside the mall, Max and Ian catch up to her while she waits for the boys to pick her up. She makes them jealous because she belongs to Gary and Wyatt—whom they think are idiots. As Lisa gets into a Porsche 928 with Gary behind the wheel, Lisa tells Max and Ian about a party at Wyatt’s house that night—of course this is news to Wyatt too. Gary then drives them off as Max and Ian look on, stupefied.

Al loses his temper and orders Lucy to call the police. Lisa pulls a gun on him while he’s on the phone—don’t worry, it’s a squirt gun—and takes Gary to the party. Once out of their house, we find that Lisa has wiped the Wallace’s memory of their confrontation with her. Al even forgets he ever had a son with Lucy.

Back at Wyatt’s house, the party begins to rage, and Gary and Wyatt hideout to his bathroom. They embarrass themselves in front of Deb and Hilly when the girls show up to use the bathroom right after Wyatt has stunk it up with a nervous dump. Eventually, the boys leave the bathroom where Ian and Max convince Gary and Wyatt to create another Lisa in exchange for Deb and Hilly. The boy’s agree, but of course this creation fails.

Lisa takes notice and scolds them for trying to impress the two people who have bullied them all this time. She then points out they failed because they forgot to connect the doll to the computer. Instead, the electrodes were lying on a magazine page with a Pershing II medium-range ballistic missile pictured on it. The real missile suddenly crashes through the house, through Wyatt’s room, and then stops after it pierces the roof.

At this point, Wyatt’s grandparents, Henry (Ivor Barry) and Carmen (Ann Coyle), arrive to pay him an after-dinner visit, but they are stunned to see a rager going on. As they are about to call the police on Lisa, she freezes them and sticks them in a cupboard. When Wyatt panics, Lisa decides the boys need a boost in confidence. She conjures up four Mad Max-type bikers to invade the party. This causes complete chaos and the boys hide in a closet, resolving to be cowards for the rest of their lives.

However, the bikers rip the boys out of the closet and then begin to humiliate them in front of the remaining guests. They then take Deb and Hilly hostage to provoke a confrontation. Wyatt and Gary finally grow a pair to save the women they love when Gary pulls out Lisa’s squirt gun. He puts it in the face of the lead biker, Lord General (Vernon Wells), as Wyatt takes his shotgun, removing the shells from it. They successfully kick the bikers out Deb and Hilly to fall in love with them too. As Gary waves the squirt gun around, it goes off, and Gary learns, the gun was real.

The next morning, Chet comes home from his duck hunting escapade and discovers the house is completely trashed. Lisa has the boys to escort the girls home while she talks to Chet one on one. Gary and Wyatt takes each girl home and proclaim their feelings for the girls with hugs and kisses, and the girls reciprocate their affection for them.

Once the boys get back home, they find Lisa has transformed Chet into a blob of chit which causes Chet to apologize to Wyatt for his behavior so that Lisa will transform him back. With her job done, Lisa hugs Gary and Wyatt goodbye before de-materializing. The house then magically transforms back to normal—including Chet—as if nothing ever happened. Wyatt’s parents return home, completely unaware of the events that took place.

The next day at the boy’s high school, Lisa returns as the new gym teacher—everyone drop and give her 20!

User Rating: Be the first one !
May 3, 2022
5 minutes read
Show More
Back to top button
Close
Close