Captain New Eyes travels back in time and feeds dinosaurs his Brain Grain cereal, which makes them intelligent and nonviolent. They agree to go to the Middle Future (this era) in order to grant the wishes of children in New York City. They are to meet Dr. Bleeb of the Museum of Natural History, but get side-tracked with their new friends and run into the Captain’s evil brother, Professor Screw Eyes, who has other plans for the dinosaurs. 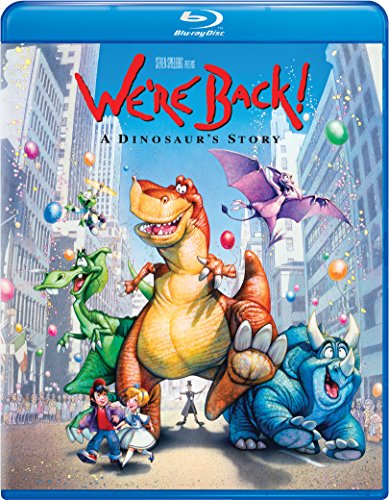 We're Back! A Dinosaur's Story [Blu-ray] 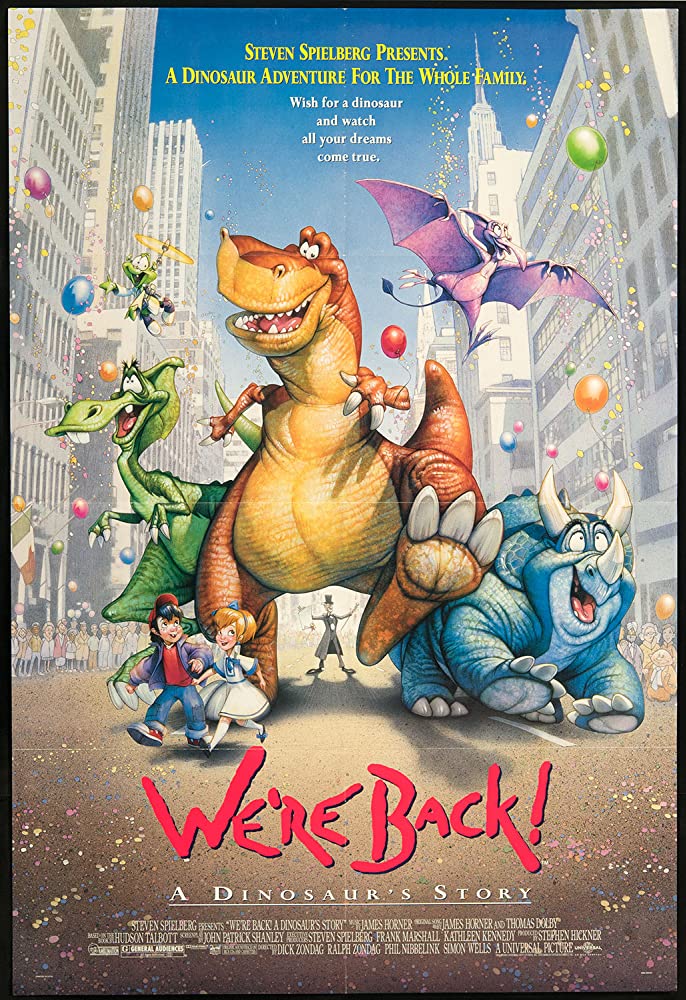 In 1990’s New York City, a bluebird named Buster (Blaze Berdahl) runs away from his family and meets an extremely intelligent Tyrannosaurus named Rex (John Goodman). Rex is playing golf, as dinosaurs are apt to do. Rex explains that he was once a ferocious dinosaur, and then proceeds to tell his story of how he changed.

In a prehistoric jungle, Rex terrorizes the other dinosaurs until a spaceship lands on Earth. The ship is piloted by an alien named Vorb (Jay Leno). Vorb captures Rex and several other dinosaurs. He gives them Brain Grain, a breakfast cereal that increases the dinosaurs’ intelligence. The other dinosaurs are a Triceratops named Woog (Rene LaVant), a Pteranodon named Elsa (Felicity Kendal), and a Parasaurolophus named Dweeb (Charles Fleischer). Vorb introduces the dinosaurs to his boss and the inventor of Brain Grain, Captain Neweyes (Walter Cronkite). Neweyes tells them that he plans on taking them to present time so children will be able to see real dinosaurs. His plans are to take them to Dr. Julia Bleeb (Julia Child) who will take them to the Museum of Natural History. However, he warns the dinosaurs to stay away from his evil brother, Professor Screweyes (Kenneth Mars).

Neweyes deposits the dinosaurs off in the Hudson River in the present day (the 1990’s). However, they don’t make their meeting with Bleeb. They do meet a young boy named Louie (Joey Shea). Louie wants to run away and join the circus, but agrees to help the dinosaurs get to the museum first. In route to the museum, Louie meets a young girl named Cecilia (Yeardly Smith) who is miserable because of her neglectful parents. She decides to join Louie and help the dinosaurs as well.

Louie decides to hide the dinosaurs in plain sight by having them pretend to be floats in the Macy’s Thanksgiving Day Parade to avoid a public panic. However, Rex sees an Apatosaurus balloon in the parade and goes up and greets it. He punctures the balloon, causing it to deflate and fall on the dinosaurs. The parade audience realizes that the dinosaurs are real and begin to run in a panic. The dinosaurs are forced to run and hide in Central Park after they are pursued by the police and the army.

The kids awake the next morning and are greeted by a circus clown named Stubbs (Martin Short) who works for Screweyes. The clown explains what occurred while they were sleeping. Louie and Cecilia make a plan to sneak into the night’s show and save the dinosaurs with the clown’s help.

That night, Screweyes opens his circus with a frightening parade of demons and evil spirits. He follows the parade up with the debut of the dinosaurs which terrifies the audience. Screweyes tells the audience that he can control Rex, and proceeds to hypnotize the large dinosaur. However, a crow unintentionally activates the flare lights, which breaks the trance with Rex. The Tyrannosaurus becomes enraged and tries to eat the professor. Louie rushes in and tries to talk Rex out of killing Screweyes. The young boy’s pleas return Rex and the other dinosaurs to their kind and friendly natures.

Captain Neweyes arrives in his ship and congratulates Louie and Cecilia. The two young kids kiss each other, while Stubbs resigns from the professor’s circus. Neweyes, Louie, Cecilia, and the dinosaurs board the spaceship, leaving Screweyes to be swarmed by a large group of crows who appear to devour the evil professor. The dinosaurs finally arrive at the museum. They spend the rest of their days at the museum, allowing children to see live dinosaurs.

Back in the present (1990’s), Rex tells Buster that he and his fellow dinosaurs are still in the museum. He tells the little bird that both Louie and Cecilia resolved their differences with their parents and ended up becoming a couple. Rex returns Buster to his family who learns to ignore his brothers’ taunts. Rex then proceeds to leave the golf course and returns to the museum.