On Christmas Eve, three escape convicts from Devil’s Island encounter the Ducotel family who run a small store in French coastal town. The convicts decide to rob the store, to get some money and clothes to help with their escape from the island. The convicts soon begin to feel sympathetic to the Ducotels’ financial and family problems and decide to help them. However, the arrival of the store’s owner, Andre, complicates things as the wealthy man plans to replace the Ducotels family as managers of the store. 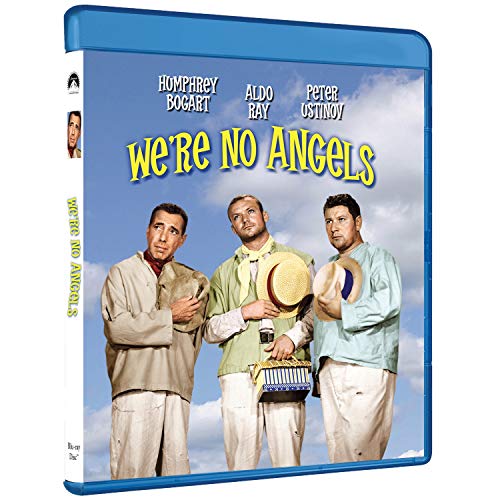 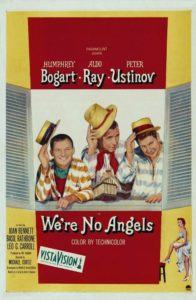 Near the turn of 20th Century, three convicts from Devil’s Island in French Guiana escape from prison just before Christmas. The three arrive in a nearby French colonial town of Cayenne on Christmas Eve and pose as freshly released prisoners. The leader, Joseph (Humphrey Bogart), was sent for prison for forgery and robbery. His companions, Albert (Aldo Ray) and Jules (Peter Ustinov), were both sent to prison for murder.

They are asked by a sailor, Doctor Arnaud (John Smith), who is from a ship moored off the shore, to deliver a letter to a store manager, Felix Ducotel (Leo G. Carroll). The convicts deliver the letter and discover that the store is a quaint little shop that is ripe for robbing. The store is in a poor financial position as it is the only store in town to give supplies on credit. The convicts notice that the store’s roof is leaking and offer to fix it for nothing as a pretense to stay around the store.

While conducting their work, the convicts discover that the letter is from Felix’s cousin, Andre Trochard (Basil Rathbone), the wealthy owner of the shop. Andre is quarantined on the ship moored off the shore and seeks the assistance of Felix to free him. The letter also indicates that Andre’s nephew, Paul Trochard (John Paer), is accompanying him. Felix’s daughter, Isabelle (Gloria Talbott), is in love with Paul, but Andre’s letter indicates that Paul is engaged to a woman from a wealthy family. The news devastates Isabelle, and she cannot be consoled by either Felix or her mother Amelie (Joan Bennett), although Albert does bring a smile to her face.

We came here to rob them and that’s what we’re gonna do – beat their heads in, gouge their eyes out, slash their throats. Soon as we wash the dishes. Joseph (Humphrey Bogart)

The convicts help out the Ducotels. Joseph works as a salesperson, and he successfully upsells several items to customers. The convicts plan to rob the Ducotels, but they become obsessed with helping them out. The convicts offer to make a Christmas dinner for the family. They scour the island for the necessary supplies, including decorations and a turkey that are stolen from various areas. The meal is highly successful, and the Ducotels are very appreciative of the convicts’ efforts.

The convicts plan to remain until nightfall when they will steal clothes and supplies, and then make their escape on a ship that is waiting in the harbor. However, when Andre and Paul escape their quarantine from the ship and arrive at the store, the convicts decide to stick around to help the financially distressed Ducotels. Andre threatens to replace Felix as manager due to Andre’s perception that Felix has mismanaged the store due to his over allowance of purchases on credit. Andre also forbids Isabelle and Paul from seeing each other and fears that Isabelle is solely interested in Paul because he is supposed to inherit Andre’s fortune.

Joseph offers to redo the store’s account books to show that the store is highly profitable. Felix refuses the offer, but Joseph plans to do it anyway. However, Andre requests to read the books during the night which prohibits Joseph from doing his magic. The convicts switch to another plan which is to allow Albert’s pet viper snake, Adolphe, free in Andre’s room with the hope that he is bitten. The plan is successful, and Andre dies during the night. Joseph authors a fake will that leaves the entirety of Andre’s estate to Felix and places it in Andre’s briefcase.

The next morning, Christmas morning, the convicts scour the house looking for the missing Adolphe while also attempting to set up a ruse for someone else to discover Andre’s body. Eventually, Paul enters his uncle’s room and learns that his uncle is dead. Paul barely contains his pleasure that his uncle has passed on. The convicts provide Paul with the briefcase that contains the fake will, believing that he will reveal the document. However, once Paul finds the will, he burns it so that his uncle’s estate passes to him. The convicts consider killing Paul since they no longer find that he is a suitable companion for Isabelle. Fortunately, they are assisted when Paul is bitten by Adolphe who was hiding in the pocket of Andre’s bathrobe. Paul dies a few moments later.

The Ducotels’ problems are suddenly solved. Felix will inherit Andre’s fortune and be able to maintain the store. Isabelle finds a new love in the form of Dr. Arnaud, who is summoned to the store in a vain attempt to help the deceased Paul. The convicts steal the clothes and supplies they need and proceed to the dock to await the arrival of their escape boat. However, the convicts reconsider their escape and decide that the outside world is likely to be worse than that of the prison. They decide to turn themselves back in. As they begin walking back to the prison, a glowing halo appears over their heads, which is followed by one above the cage of Adolphe.