When Bob appears at a psychotherapist’s door, he displays almost every possible phobia in the world. This uptight shrink gives him a copy of his new book before heading out to a month-long vacation. Bob finds out where the doctor’s vacations and goes to him; changing both men’s lives forever. 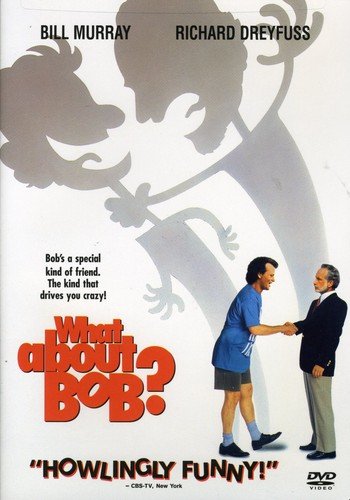 ‘What About Bob?’ Movie Summary 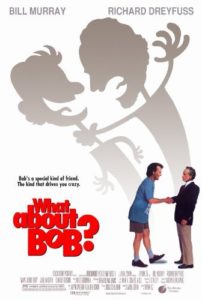 Bob Wiley (Bill Murray) is an affable, everyday man who suffers from so many phobias that it’s difficult for him to leave his apartment. He finds himself divorced and alone, and seeks regular therapy from a variety of therapists. However, he makes little progress with these therapists as his fears consume him.

Enter the egotistical Dr. Leo Marvin (Richard Dreyfuss) who has recently published book titled Baby Steps. Bob is so high maintenance that his current therapist basically fires Bob and pushes him over to Dr. Marvin. While Bob feels good about their initial session, there’s a big problem; but Dr. Marvin is heading out on his annual month-long family vacation to Lake Winnipesaukee, New Hampshire. Unable to function without a therapist, Bob follows Leo to the lake.

While Bob’s sudden appearance greatly annoys Leo, he sees the desperation in Bob’s face. He tells him to take a vacation from his problems. This is a breakthrough for Bob, and Leo seems to have averted a small crisis. However, the next morning, Leo finds that Bob will also be vacationing at Lake Winnipesaukee as a guest the Guttmans (Tom Aldredge and Susan Willis). They despise Leo for purchasing the lakeside home they’d been saving for years to buy, and if Bob antagonizes Leo, that’s great for the Guttmans.

Bob now wants to be friends with Leo, but being friends with a patient is beneath Leo. This doesn’t deter Bob and he befriends Leo’s family; his wife Fay (Julie Hagerty) and two kids, Anna (Kathryn Erbe) and Sigmund (Charlie Korsmo). The kids even seem to relate to Bob more than their dad.

With Bob on vacation from his phobias, he begins to loosen up. He goes sailing with Anna and teaches Sigmund dive, which pisses off Leo because he’s been trying for years to teach him with no success. In frustration, Leo pushes Bob into the lake. However, the good-natured Fay invites Bob to dinner. Bob accepts; oblivious to the fact that Leo’s evil actions towards him are not part of his therapy.

After dinner, Bob must spend the night at their house because a thunderstorm has hit the lake. However, Leo demands Bob be out of the house early the next morning because Good Morning America will be there to interview him about Baby Steps. Much to Leo’s displeasure, Bob is still there in the morning, and the TV crew thinks it’d be great if Bob be part of the interview. Things don’t go well for Leo and he winds up making a fool out of himself. Bob for his part is calm, cool, and relaxed. His glowing review of Leo and the book steals the spotlight away from the good doctor.

This leads to Leo throwing a tantrum. He then attempts to have Bob institutionalized, but the hospital staff quickly releases him after Bob befriends them. Since he exhibits complete sanity to them and displays real therapeutic progress due to his time with Dr. Marvin’s family, they have no reason to keep him.

Now forced to bring Bob home, Leo abandons him in the middle of nowhere on the way back. Bob’s still able to get a ride back to Leo’s house and arrives home before him. Due to a few mishaps, Leo returns after nightfall where Fay throws him a surprise birthday party. He’s ecstatic to see his sister Lily (Fran Brill) has shown up for the event too. However, when Bob suddenly appears and puts his arm around Lily, Leo has a psychotic break. He attacks Bob. Bob’s still clueless that Leo hates him until Fay explains it to him like he’s five. Bob finally agrees to leave.

Meanwhile, Leo breaks into the general store, steals a shotgun and 20 pounds of explosives. He finds Bob and takes him deep into the woods. There he ties him up with the explosives for some death therapy. He then returns to the house alone with an excuse for no Bob. Believing the explosives are some sort of props, Bob uses Leo’s Baby Steps to see the danger as a metaphor for his problems. He frees himself from both his restraints and remaining fears.

Once back outside the Marvin abode, Bob has nothing but praise for Leo finally curing him. However, the Marvins’ vacation home suddenly explodes because Bob left the “prop” explosives inside it. This is too much for Leo, and he enters a catatonic state. Now institutionalized himself, the board that governs his profession revokes his medical license for attempted murder.

Months pass and a still catatonic Leo attends Bob and Lily’s wedding. Upon the priest proclaiming them husband and wife, Leo snaps out of this state yelling “No!” Unfortunately, his objection is ignored as family rejoices at his sudden recovery.

The film’s epilogue says that Bob went back to school and became a psychologist. He wrote a best-selling book of his own titled Death Therapy which Leo is now suing him for the rights.