What We Do In The Shadows introduces us the age-old vampire flat mates being filmed by a New Zealand documentary crew. Stuck in their antiquated ways they struggle to adjust to 21st century customs, like paying rent, sharing household chores, and getting expressly invited into nightclubs. 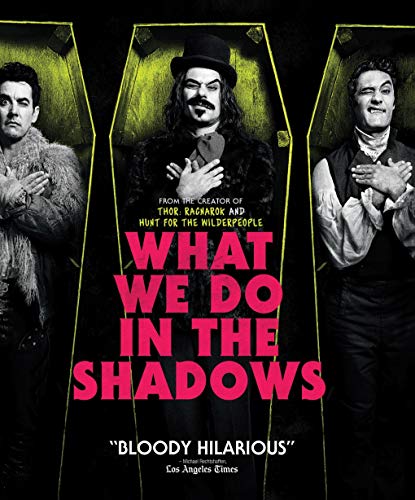 What We Do in the Shadows [Blu-ray]

‘What We Do in the Shadows’ Movie Summary 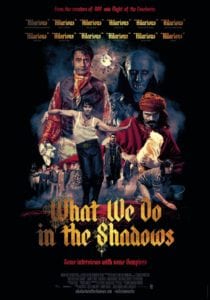 The vampires are old school, and age from 183 years young to 8000 years old. After waking up each night, Viago, Vladislav, and Deacon search the streets for human victims to feast on, and the film focus’ on each of them in a documentary style. Petyr mostly stays in the basement like a teenaged goth boy.

Deacon is the youngest of the three, is busy being sexy and leading on Jackie, a live human. She runs errands for him, and serves his every need. In return, he promises to give her eternal life as a vampire…eventually. Deacon gets Jackie to bring him some victims to play the spaghetti game and then kill. One man she brings is her childhood boyfriend, Nick. Nick freaks out over the spaghetti game, and he tries to leave the flat. Eventually he escapes, but Petyr attacks him, and he turns into a vampire.

Trouble in the Flat

A few months go by, and all the vampires, except for Deacon, accept Nick because he doesn’t like him. The documentary crew focus’ on Nick’s struggles with the transition to vampire life. He brings his live friend, Stu, to the flat, and the other vampires accept him when Stu teaches them all about modern computers.

However, the other vampires kick Nick out of the flat when a vampire hunter kills Petyr, during a day raid, after overhearing Nick’s bragging about being a vampire. Deacon and Nick fight over the death, and the police soon arrive at the scene. Viago hypnotizes the cops, and all they find in the flat are minor infractions amongst the vampires and death…and they they happily go on their way.

Later, the vampires receive an invitation to a masquerade ball for zombies, witches, undead beings, and anything else supernatural. Vladislav is the only one not excited, because “The Beast” is the guest of honor. Viago and Deacon show up to the ball as well as Nick who brings the live Stu with him as his plus one. Jackie is also there. Nick made her a vampire since Deacon wouldn’t, and now Deacon hates Nick even more.

“The Beast” arrives, and she turns out to be Vladislav’s ex-girlfriend, Pauline. He has given her that nickname because is was not a good breakup for him. Pauline and a zombie realize Stu is a live human as well as the film-crew. Vladislav shows up to try to stop everyone from devouring the men, but chaos ensues, and Stu impales Pauline’s new boyfriend with a wooden stake through his heart.

Setting Up the Sequel?

Everyone escapes, but on the way back to the flat, they come across a pack of werewolves about to transform during a full moon. They attack everyone, and Stu and the camera crew die from the ambush.

The mocumentary ends with Nick showing up a month later at the vampire’s flat with Stu who is now a werewolf. Even though vampires and werewolves hate each other, the two groups call an unsteady peace.

Viago, who has been pining for his girlfriend he lost 70 years earlier, reunites with her and turns her into a vampire. Now a 90-year-old woman, the two spend eternity happily ever after.

Affiliate links contained in this post will take you to Amazon.com. This means when you click a link, and purchase an item, the MHM Podcast Network will receive an affiliate commission. When you use these links MHM gets credit regardless of what you purchase, or from what country you order. You don’t pay a penny more! Advertisers and Affiliate Partnerships do not influence our content. See our Terms of Use about the inclusion of affiliate links on this site for more information.