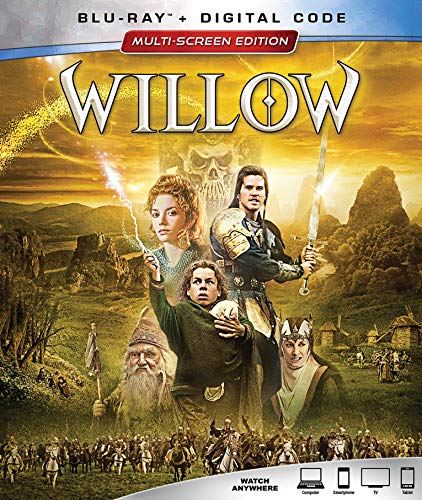 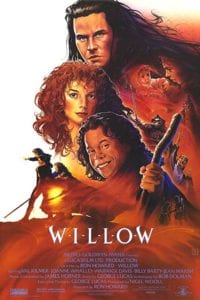 A child is born that fulfills prophesies of the ruin of evil Queen Bavmorda (Jean Marsh). Although the Queen diligently monitors all births of female children with the intention of killing the promised one, the child escapes with the midwife and is sent afloat on a raft. The children of a Nelwyn farmer/magician named Willow Ufgood (Warwick Davis) find the exceptional infant and the Ufgood family take her in. A sinister creature attacks the Nelwyn village searching for the baby and Willow is tasked by the village counsel with returning her to the “large people” with whom she belongs.

Willow and his closest friend, Meegosh, set off on their assigned mission. They stumble upon the thief Madmartigan (Val Kilmer) locked up in a cage. Meegosh convinces Willow to leave the child with Madmartigan who promises to care for her. Against his intuition, Willow entrusts the baby to the thief.

On their journey home, Willow and Meegosh are attacked by a clan of Brownies who have stolen the baby from Madmartigan. The Brownie Fairy Queen informs Willow that he has been chosen to protect this baby girl and that she is named Elora Dannon. He learns how special Elora is. Willow is given a magic wand and two Brownie guides and is instructed to ask the sorceress Fin Raziel for help.

Willow re-encounters Madmartigan who helps him fight off Sorsha, the daughter of Bavmorda. Sorsha is working for her Mother against the chosen child.

Willow and crew find Raziel but she has been transformed into a rodent by the Queen in her quest to save her evil empire. Willow tries to use his wand to return Raziel to her human form but he fails.

Sorsha captures Willow and company and sets off to deliver them to her Mother at her fortress. Willow and his band manage to escape but Madmartigan becomes enamored with Sorsha thanks to a Brownie love potion. The group seek help at the castle of Tir Asleen but find all of the occupants frozen in ice due to one of Bavmorda’s spells.

Elora’s protectors prepare to combat Sorsha and her army. They receive aid from an old friend of Madmartigan and eventually from Sorsha herself when she falls in love with Madartigan.

The Queen’s General captures Elora and takes her to the Queen’s castle. After many failed attempts, Willow finally restores Fin Reziel to her natural human form.

Elora’s Army prepare to storm the castle and rescue her again but Bavmorda uses her black magic to turn most of them into pigs. Raziel is able to remove the spell and they make it into the castle where the battle begins. Sorsha guides Willow and Raziel to the room where Bavmorda has commenced a dark ritual to sacrifice Elora and preserve herself. When confronted, the Queen knocks out Raziel and coldly disables Sorsha, her own daughter. Willow cunningly tricks Bavmorda into believing that Elora has been transported into another realm. Frustrated, Bavmora accidentally completes the ritual and condemns herself.

In their happily ever after, Sorsha and Madmartigan raise Elora together while Willow returns home a respected magician to his proud family.