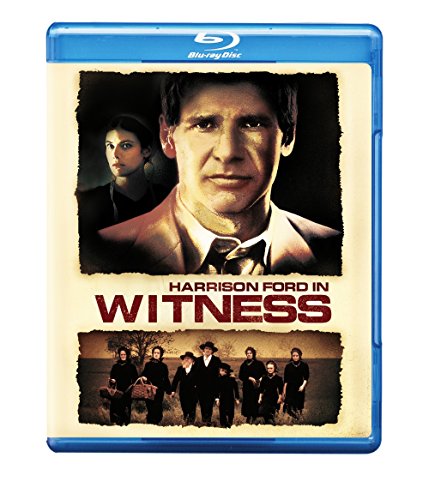 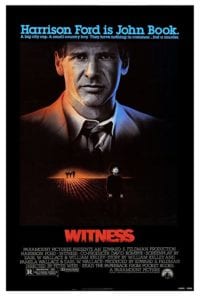 Witness starts in the Lancaster County, Pennsylvania countryside where we are introduced to an Amish community attending the funeral of Rachel Lapp’s husband at their lush turn-of-the-century farm. It is though we are transported back in time. Rachel, her husband’s father, Eli, and Rachel’s son, Samuel, all live on the farm together completely independent of modern conveniences.

After the funeral, Rachel and Samuel board a modern-day train to visit Rachel’s sister. The train makes a stop at the Philadelphia station where they are delayed. As they wait and are overwhelmed with the modern world they do not fully understand, Samuel uses the restroom. While in a stall, he witnesses the murder of an undercover police officer.

During a frantic search by the killer for any witnesses, Samuel escapes detection. Once the murder is reported, the Philly police department sends Detective Lieutenant John Book and his partner to question Samuel. They don’t get all their information so they require Rachel and Samuel to delay their departure until Samuel can I.D. the bad guy. The scared Amish family stay the night at Book’s sister’s house.

The next day, Samuel is at the police station looking at mug shots when he stares into a police trophy case, revealing the killer to be a dirty cop named McFee. Book tells his boss, Captain Schaefer, who asks who else knows. Book tells his partner then scrams to his apartment. But in the parking lot of his apartment, McFee shows up and a shootout ensues. McFee escapes but not before shooting Book.

Injured, Book races to his sister’s house, takes her car, and transports Rachel and Samuel back to Lancaster County far away from the dirty cops and tells Rachel they need to forget the whole thing and he is going to disappear. Before he can leave, however, he passes out from his wound and wrecks his car on the farm.

Rachel and Eli bring in an Amish doctor who slowly nurses him back to health but they break their honor code and do not report the gunshot wound to the authorities. Schaefer calls the Lancaster County sheriff to track down Rachel and Samuel, but is told there are too many Amish with the same name and they all blend together but the sheriff promised to call Schaefer if anything amiss happens.

As Book recovers, Samuel finds Book’s loaded gun but Book sternly warns Samuel that loaded guns are dangerous. Samuel wants to learn about guns, but Rachel scolds Samuel and Book both before Book hands over his gun to Rachel for safe-keeping, where she puts the gun in a cupboard and the bullets in the flour jar.

Book recovers enough to be put to work on the Lapp farm. The only clothes available to him since his are blood-soaked are Amish clothing. Book puts on the clothing and blends in as best he can while helping around the farm and community, while still checking in with his endangered partner in Philadelphia by payphone. Book realizes he has to stay hidden while the corrupt cops try to ferret him out.

Book stays with the Lapps and starts to share strong feelings with the widow, Rachel. Eli finds out Book is a good carpenter and enlists him to help the community at a huge barn raising, where Book shows he’s the best carpenter in the village, much to the delight of Rachel, and much to the chagrin of an Amish would-be suitor of Rachel’s named Daniel.

Back at the farm, Rachel takes a spongebath when Book happens by. He catches her but in his newfound shame, he conveys to her it is forbidden and she hides from him. The next day, Book heads to town and calls his partner, only to find out his partner was murdered. Book calls Schaefer and threatens to kill him for what he’s done.

While enraged, Book gets back into the Amish buggy with Eli as Daniel and his family are confronted by drunken local hooligans that bully Daniel. Against Eli’s wishes, Book approaches and the bullies try to bully Book. Book breaks the nose of one bully and chases the rest of them away, embarrassing the Amish families. The local police call in the disturbance and it is reported to Schaefer.

That night, Eli tells Rachel there has been talk in the Amish community about Rachel and Book having a romance, which is untrue thus far. Eli threatens the defiant Rachel with potential excommunication from the Amish. Rachel realizes Book is leaving the next morning.

Silently, she takes off her Amish bonnet and finds Book in the field. They make sweet love in the barn all night. The next morning, unbeknownst to the hard-working Book and the innocent Lapp family, Schaefer, McFee and a third crooked cop show up outside the Lapp farm with shotguns.

Schaefer takes Rachel and Eli prisoner as the unarmed Book and Samuel escape. Book pushes Samuel out the door to run to safety to the neighbor’s farm while Book stays to fight. Book evades the third cop by tricking him into opening a door and while Book climbs to the top of the corn loft.

While the cop climbs into the corn silo, Book opens the ceiling door and tons of corn pour down on the dirty cop, suffocating him to death. As McFee and Schaefer run toward the commotion, Samuel has returned and rings the dinner bell over and over to warn the neighbors, who all start running for the Lapps.

Book locates the cop’s shotgun and blasts McFee to death. Schaefer holds Rachel prisoner and tells Book to drop his gun. To save Rachel, Book drops his gun as Schaefer takes Book and walks him outside, where the entire Amish community stands with their pitchforks and shovels.

Book tells Schaefer its over since he can’t murder everyone there. Schaefer gives up and the local police are called. Its truly over. Book dresses in his Philadelphia clothes and says goodbye to Samuel. As he stands at the door, he and Rachel smile at each other, but both know neither can stay with the other. Book turns to leave when Eli tells him to take care of himself.

As Book drives into the distance, he passes Daniel who is coming to call on Rachel. The End.

User Rating: Be the first one !
May 18, 2020
5 minutes read
Show More
Back to top button
Close
Close