In seventeenth century Ireland, a young apprentice hunter named Robyn and her father Bill Goodfellowe journey to the small town of Kilkenny to help wipe out the last wolf pack that harasses the village. However, everything changes when Robyn befriends a free-spirited girl named Mebh who is a member of a mysterious tribe rumored to transform into wolves by night. Soon, both Robyn and her father will be forced to change their perception on what it means to be human. 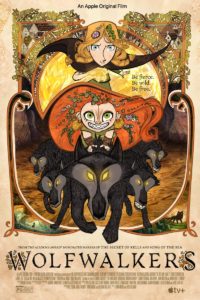 In the small Irish town of Kilkenny in 1650, the residents are working to clear the nearby woods for farming under orders from Lord Protector Oliver Cromwell (Simon McBurney). The towns’ plans come into conflict with a wolf pack that lives in the woods. Cromwell has charged English hunter Bill Goodfellowe (Sean Bean) with clearing the woods of the wolves. Goodfellowe brings his young rebellious daughter Robyn (Honor Kneafsey) with him to Kilkenny. Robyn feels confined by the small town and wishes to follow her father into the woods, although he forbids it. Nevertheless, Robyn follows her father one day with her pet falcon, Merlyn.

While in the woods, Robyn hears the village alarm bell and runs back to the town. Once there, she sees a pack of wolves confronting one of the farmers. Robyn tries to shoot one of the wolves with her crossbow, but accidentally shoots Merlyn, knocking him from the sky. Merlyn falls near the edge of the woods, and Robyn sees a mysterious girl pick up the bird before the wolf pack runs off into the woods with the girl. Cromwell chastises Goodfellowe for not killing more wolves and for involving his daughter The Lord Protector gives the hunter two days to complete his task.

After her father leaves, Robyn manages to sneak back into the woods. She finds Merlyn miraculously healed, but she accidentally stumbles into one of her father’s traps when she is approached by a young wolf. Surprisingly, the wolf tries to free Robyn from the trap, but the young girl misunderstands the wolf’s intentions and attacks it. The wolf bites Robyn’s arm during the struggle. After Robyn is freed, Merlyn and the wolf lead Robyn into the wolves’ den where she discovers the wolf is the same mysterious girl that she saw at the edge of the woods. The girl, named Mebh (Eva Whittaker), magically heals Robyn’s wound and explains that she is a wolfwalker, a human whose spirit becomes a wolf when she sleeps.

The two girls quickly become friends and share their mutual desire for freedom. Mebh explains that her mother, Moll MacTire (Maria Doyle Kennedy), is also a wolfwalker. However, Moll has not returned to her body after leaving it to find a new place to live for the wolf pack. Robyn plans on explaining the wolfwalkers to her father. However, when she tries to convince Goodfellowe of the existence of the wolfwalkers, but her father scolds her for going into the forest instead. Goodfellowe tells her that she cannot disregard the Lord Protector’s orders. He makes Robyn promise never to return to the woods.

That night, Robyn has dreams that she is a wolf in the woods. She believes that it is merely a bad dream. The next morning, Robyn works her first day at the scullery as ordered by the Lord Protector. While working, she is drawn into the Lord Protector’s chambers by a mysterious voice. Once there, she finds a large, concealed cage, but she is quickly ushered out of the room by the head maid before she uncovers what is contained in the cage.

That night, when Robyn falls asleep, her soul leaves her body and inhabits a body of a wolf as a result of Mebh’s bite which makes Robyn a wolfwalker herself. Panicked and shot at with an arrow by her father, Robyn flees to the woods where she finds Mebh. Robyn’s friend is happy that the two of them now share another thing in common. Mebh helps Robyn understand and adapt to her new wolf form. Upon returning to Kilkenny, Robyn is drawn to the Lord Protector’s manor.

She encounters resistance to the manor, including the Lord Protector and Goodfellowe. Nevertheless, she makes it inside and finds Moll imprisoned in the large cage. Moll tells Robyn that Mebh must leave the woods with the pack as the Lord Protector has made it unsafe for wolf kind in the woods. Robyn tries to free Molly, but the Lord Protector discovers Robyn and tries to kill her. Robyn flees back to her home and has her spirit return to her human body.

Goodfellowe returns home and is glad to see his daughter well. She tries to convince him that the wolves are not a threat, but she is interrupted by the Lord Protector’s men who insist that Goodfellowe come with them. He and Robyn are taken to the Cromwell who is leading a rally to insure the people of the town that they are safe from wolves. He seeks to restore order to the town and assures the townspeople that he can tame the wolf he has captured, and by extension, nature itself. He demotes Goodfellowe to a foot soldier for failing to eliminate the wolves and threatens to send him to war if Robyn does not stop her nonsense about wolfwalkers.

The next day, Robyn and Goodfellowe tend to their duties fearing separation from each other. Mebh comes into town after Robyn fails to return to the forest as she promised to do the day before. She finds Robyn, who tells Mebh that Moll wishes for her and the pack to leave the forest without her. Mebh is devastated that Robyn refuses to help her rescue her mother from the Lord Protector’s cage. Mebh vows to free her alone. Mebh and Robyn watch Cromwell present a muzzled and chained Moll before the townspeople. Mebh charges the stage to free her mother. Moll sees her daughter and begins to react. Goodfellowe tries to restrain her and Moll breaks the muzzle and bites Goodfellowe’s arm. Moll is placed back into her cage, and Mebh is forced to flee to the forest. Before leaving, she vows to return with her pack to rescue her mother.

Cromwell orders Goodfellowe to kill Moll and leads his army to burn the forest down to destroy the wolf packs. Robyn prevents her father from killing Moll. She frees the leader of the wolfpack and rides her out of the village. Once in the forest, Robyn reunites Moll with Mebh before the young girl can lead the wolf pack against the village. Mebh forgives Robyn and the two girls become friends again. However, Goodfellowe arrives and shoots Moll in the chest with an arrow. The injury causes Moll’s wolf form to become a spirit and return to her human body in the den. Mebh and the other wolves follow the spirit back to the den. Goodfellowe tries to pull his daughter away, but she transforms into her wolf form to finally prove to her father that she is a wolfwalker. Cromwell arrives with his army and begins to raze the forest.

In the den, Mebh works to try to heal her mother but finds that she is not strong enough. Robyn leads the wolf pack against the army. Mebh summons Robyn and her pack back to the den, realizing she needs them all present to heal Moll. Robyn stays behind and is knocked unconscious after disabling the army’s cannon. The Lord Protector moves in to kill Robyn and Goodfellowe turns into a large wolf from Moll’s earlier bite. Goodfellowe overpowers Cromwell in one-on-one combat. The Lord Protector commits suicide by falling from a cliff when Goodfellowe gets ahold of his belt.