Wreck-It Ralph longs to be as beloved as his game’s perfect Good Guy, Fix-It Felix. Problem is, nobody loves a Bad Guy. But they do love heroes… so when a modern, first-person shooter game arrives, Ralph sees it as his ticket to heroism and happiness. He sneaks into the game with a simple plan — win a medal — but soon wrecks everything, and accidentally unleashes a deadly enemy that threatens every game in the arcade. Ralph’s only hope? Vanellope von Schweetz, a young troublemaking “glitch” from a candy-coated cart racing game who might just be the one to teach Ralph what it means to be a Good Guy. 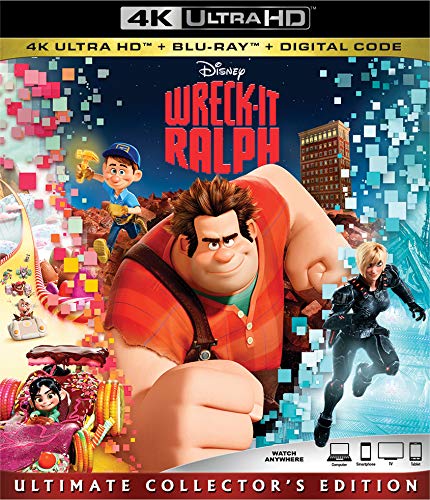 Wreck-It Ralph takes place in the world of video games, where when the arcade closes at night, the characters interact with their opponents and characters from other games. Wreck-It Ralph (John C. Reilly) is the villain in the game Fix-It Felix Jr. Ralph is tired of being ostracized by other characters for being a villain. He wants to be praised and awarded medals like Felix (Jack McBrayer).

After he is kicked out of a party at Felix’s house by the characters in the game, Ralph sets out to win himself a medal in one of the other video games in the arcade. Ralph’s absence in his own game causes Felix to believe that Ralph as “gone Turbo”, referencing a notorious racing game character named Turbo who attempted to take over another game out of jealousy, which resulted in both games being unplugged.

Ralph learns he can obtain a medal from the game Hero’s Duty. Ralph takes the armor of another character and climbs the game’s central beacon. He obtains a medal, but accidentally hatches a Cy-Bug, a dangerous and pervasive enemy character. Ralph, along with the Cy-Bug, stumble into an escape pod, which is then shot out of Hero’s Duty and into a neighboring game, Sugar Rush. Sugar Rush is a kart racing game. A young girl named Vanellope von Schweetz (Sarah Silverman) steals Ralph’s medal to buy her way into the race on her own game. However, the ruler of Sugar Rush, King Candy (Alan Tudyk) forbids her from racing because of her glitches that cause her to teleport erratically.

Meanwhile, the Fix-It Felix Jr. game is shut down in the arcade due to Ralph’s absence. The machine maybe unplugged if Ralph doesn’t return, forcing the characters to live in Game Central Station. Felix sets out to find Ralph and follows his trail to Hero’s Duty. There, he meets that game’s heroine, Sergeant Calhoun (Jane Lynch), who agrees to help Felix find Ralph because she needs to destroy the Cy-Bug that escaped.

Back in Sugar Rush, Ralph agrees to help Vanellope to become the racer that she dreams of being in exchange for his medal. He helps her build a new kart and Vanellope practices racing at Diet Cola Mountain. Ralph tries to help her learn to drive, but Vanellope has her own reckless style. King Candy finds Ralph and offers Ralph his medal if he will prevent Vanellope from racing.

Candy explains that if Vanellope wins the night race, she will become a playable character in the game. However, her consistent glitch will lead to Sugar Rush being unplugged. Candy also explains that Vanellope’s glitch also prevents her from leaving the game, so if Sugar Rush is unplugged, she will cease to exist. Not wanting to see his friend hurt, Ralph smashes Vanellope’s new kart. Devasted, Vanellope runs off, later to be captured by King Candy.

Ralph returns to his game and finds that everyone is gone. They have all left due to the fear of being unplugged. Ralph looks outside his game and notices Vanellope’s image on the side of the Sugar Rush game console. He realizes that she is supposed to be a playable character in the game. He returns to Sugar Rush to investigate and learns that King Candy disconnected her code from the game which causes her glitch. He also wiped the memories of all the other characters, which caused her to be despised by them.

Meanwhile, Felix and Calhoun follow Ralph to Sugar Rush. Felix has fallen in love with Calhoun, but she leaves him when he reminds her of her deceased fiancé. Felix is captured and imprisoned in King Candy’s castle. Ralph frees Vanellope and Felix from the castle, and Felix uses his fix-it hammer to repair Vanellope’s car.

Meanwhile, Calhoun finds a nest of Cy-Bug eggs underground, which begin to hatch and take over the game. At the same time, Vanellope enters the race in Sugar Rush. After the race begins, King Candy attacks her. Her glitch causes Candy’s secret identity to be revealed. King Candy is Turbo. Vanellope uses her glitch to escape Turbo, who is eaten by a Cy-Bug. Ralph, Felix, and Calhoun evacuate the game, but Vanellope is not able to leave due to her glitches.

As the Cy-Bugs approach, Calhoun tells Ralph that the monsters can be destroyed by a beacon of light. Ralph decides to force the eruption of Diet Cola Mountain, which will draw the Cy-Bugs to the light. Turbo, now turned into a morphed version of a Cy-Bug, stops Ralph from causing the eruption. Ralph kicks himself free of Turbo and sacrifices himself to create the eruption. He drops straight down into the crater causing all the Mentos to fall into the soda. However, Vanellope uses her kart to save Ralph and get him to safety before the soda erupts. The Cy-Bugs and Turbo are all attracted to the light and fly into the eruption causing their destruction.

Vanellope crosses the finish line, rebooting Sugar Rush and restoring her player status and her memories as Princess Vanellope. However, she chooses to retain her glitching ability. Ralph and Felix return to their game and include some of the homeless characters in their game, making Fix-It Felix Jr. to become even more popular. Felix and Calhoun get married, and Vanellope’s game becomes even more popular with her return.