In the early part of the 19th Century, a family farms the Yorkshire countryside. One day the father returns from a trip to the city and brings with him a little boy. His son does not like the boy, but his daughter bonds with him. When the parents die, the remaining three grow up wild, free, and happy; that is until the daughter meets the son of a wealthy neighbor. 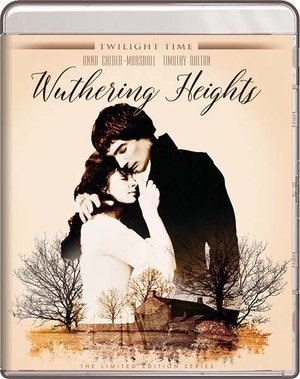 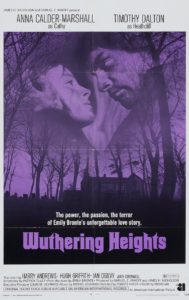 Robert Fuest’s adaptation of the Emily Bronte classic Wuthering Heights is passionate, fiery and, most of all, untamed. Fuest depicts the first half of the Bronte novel and its first generation of characters. Lifelong servant Nellie (Judy Cornwell) narrates the story of the Earnshaws, a Yorkshire family residing at Wuthering Heights. When Mr. Earnshaw brings an ‘gypsy orphan’ home from Liverpool, years of conflict, rivalry, passion, and jealousy ensue. Eldest son Hindley (Julian Glover) resents the newly adopted Heathcliff (Timothy Dalton), while Cathy (Anna Calder-Marshall) embraces him as the other half of her brazen, savage soul.

With the passing of Mr. Earnshaw, Hindley returns to claim the Heights and to reduce Heathcliff to the status of uneducated servant. Cathy and Heathcliff happily continue their escapades across the moors, until the night of their rabble-rousing outside neighboring Thrushcross Grange. The Lintons, an elite magistrate’s family and the Earnshaw’s nearest neighbors, take the ratty Cathy under their wings and transform her into a high-strung lady – one who is appalled with Heathcliff’s animal-like speech and filth. While Cathy struggles between the Heights and Thrushcross Grange (and her affections bounce from the degraded Heathcliff to the posh, charming Edgar Linton [Ian Ogilvy]), Heathcliff swears revenge on Hindley, whose belittlement and beatings have brought him so low.

On a fateful evening, Heathcliff overhears Cathy talking with Nellie: Edgar Linton has asked for her hand in marriage and she’s accepted. Cathy declares that no one could possibly marry Heathcliff – “He’s a wild animal!” To marry Heathcliff would be, in a word, “degrading.” Heathcliff instantly disappears, much to Cathy’s remorse. She wanders the moors all night in search of him, returning to the Heights only after she is soaked to the skin and seriously ill.

Three years pass. Cathy has, at last, married Edgar Linton and moved into Thrushcross Grange. Hindley, disconsolate at the passing of his wife, has driven himself to the state of drunken degenerate and gambling addict. Wuthering Heights is sitting in debt, and who appears but Heathcliff – fancily garbed and mysteriously rich. Heathcliff wins himself a spot in Hindley’s circle of gambling friends, then ventures to Thrushcross Grange to confront Cathy. In spite of the passionate trysts that ensue, Cathy and Heathcliff stubbornly oppose each other at every turn. Heathcliff’s years-long plans take precedence, as he works to buy and win every inch of Wuthering Heights from the loutish Hindley. Then, in an effort to hurt the Lintons and win the Grange, Heathcliff seduces Edgar’s sister Isabella (Hilary Heath) and drives Cathy to willful self-destruction.

Heathcliff returns home with a poorly treated Isabella as his bride. Cathy is near death, but may survive if she is kept calm – but Heathcliff must go to her and, so, sneaks into Thrushcross Grange. Cathy and Heathcliff violently embrace, furiously pour out their souls and bemoan the mistakes that kept them apart. When Linton returns and Heathcliff retreats, Cathy passes on.

In the film’s final climax, Heathcliff kneels at the foot of Cathy’s grave and says ‘one prayer’: “May you not rest while I am living.” Catherine’s ghost appears and begins to playfully lure Heathcliff across the moors, all the way to Wuthering Heights – where Hindley and Isabella wait with a rifle. When the shot is fired, a young Heathcliff is seen running to meet Cathy on the moors. The two dash across the moors hand in hand, while Heathcliff’s corpse rests on a ledge above.