X-Men: Dark Phoenix begins after a young girl named Jean Grey’s special powers causes a car accident. It kills her mother which leads to her father’s abandonment from his fear of her. Professor Charles Xavier takes her in and raises Jean at his school. Years later, when the X-Men rescue a team of astronauts, a dark and evil force exposes itself to Jean. It leads to behavior changes that affects her, her friends, and the future of the world as we know it. 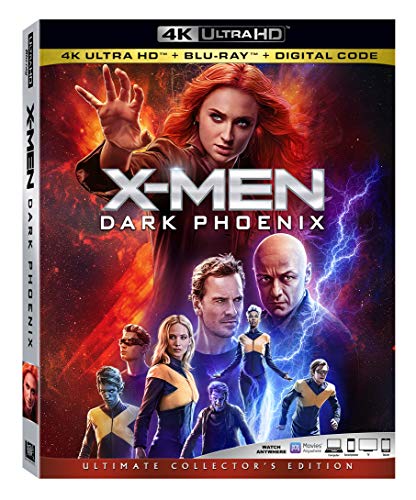 X-Men: Dark Phoenix begins with a flash back to 1975. Eight-year-old Jean Grey is in a car with her parents when she suddenly has an outburst and uses her powers. The surge of power causes a car accident that kills her mother. A short time later, Professor Charles Xavier (James McAvoy) comes to her home and takes her with him to Xavier’s School for Gifted Youngsters due to the fact that her father is terrified of her ever since her mother died.

Then, in 1992, the X-Men are now accepted by the people that once feared them. The team is seen as heroes and works with the government when called upon. An emergency arises on the space shuttle Endeavor when it is damaged by solar-flare like energy during a mission. Professor Xavier dispatches the team to conduct a rescue mission at the request of the government. The leader of the team, Raven “Mystique” Darkhőlme (Jennifer Lawrence), is skeptical of the professor’s motives, accusing him of constantly pushing the team to its limits for his own ego. Nevertheless, the team takes the Blackbird plane into space to rescue the astronauts.

Once in space, the team saves the astronauts thanks primarily to Kurt “Nightcrawler” Wagner’s (Kodi Smit-McPhee) teleporting ability. However, an adult Jean Grey (Sophie Turner) is stranded on the Endeavor when the ship is struck by the energy wave. Jean absorbs the energy into her body, preventing the wave from killing her teammates on the Blackbird. She survives the event and her psychic powers are greatly amplified as a result. However, the increase of power results in an increase in her inability to control the power. She accidentally unleashes her power on the other mutants at the school while they are celebrating the team’s victory. As a result, the other students in the school begin to fear Jean.

When Jean first came to the school, Professor Xavier placed mental walls in Jean’s mind to protect her psychic mind from experiencing trauma. However, with the enhanced power, the mental walls are destroyed and Jean’s trauma returns, resulting in her being full of all the rage and pain that has been suppressed for seventeen years. Jean travels to her hometown after finding out that her father is still alive and learns that he abandoned her to Xavier years before.

Slowly, Jean’s complete memory begins to return to her, and she recalls that she inadvertently caused the accident and the death of her mother. Jean begins to develop post-traumatic stress disorder. The X-Men arrive while she is talking with her father and attempt to take Jean home with them. However, Jean lashes out in instinct and Peter “Quicksilver” Maximoff (Evan Peters) is seriously injured and Mystique is impaled and killed by accident. In shock, Jean runs away.

Jean travels to the mutant refugee island of Genosha to seek the help of Erik “Magneto” Lehnsherr (Michael Fassbender), the arch rival of the X-Men. Magneto now leads a quiet life on the island with the other mutants who believe in his vision of the future. Magneto has controlled his rage over the murder of his loved ones by the human race, and Jean comes to him for help in controlling her rage and pain. However, when U.S. military forces come after Jean on the island, she fights the soldiers which results in Magneto turning her away.

With no place to go, Jean encounters Vuk (Jessica Chastain), an alien shapeshifter who tells Jean that she has been possessed by a force of cosmic power which wiped out Vuk’s race, the D’Bari, on her home planet years before. Vuk explains that the last remaining survivors of her race have been tracking the force across the galaxy until it was drawn to Jean. Vuk tries to convince Jean to give up the power so the D’Bari can destroy it.

Meanwhile, Hank “Beast” McCoy (Nicholas Hoult) travels to Genosha to talk to Magneto. Beast is possessed with grief over the loss of his love Mystique. He tells Magneto that Jean killed Mystique, whom the Master of Magnetism cared for as well. The two grief stricken man join forces with the intent to kill Jean Grey. They travel to New York City with some of the other mutant refugees to accomplish their goal.

The X-Men learn of Magneto and Beast’s plan, and they fly to New York to stop them. As the two groups clash, Magneto is able to get past the X-Men and confronts Jean. However, with her enhanced powers, Magneto is no match for Jean, who nearly kills him. In the nick of time, Nightcrawler teleports Professor Xavier into the building. Believing they are a threat, Jean attacks the pair until Xavier convinces her to read his memories, which allows the more stable version of Jean’s personality to reemerge and take control.

Feeling regret for her actions, Jean offers to let Vuk take the cosmic force from her. However, it is revealed that doing so would kill Jean. Additionally, Jean discovers that Vuk has no intention of destroying the cosmic force, but in fact, intends to take the force for herself so she can conquer the Earth.

While Vuk is absorbing the cosmic force from Jean, Professor Xavier and Scott “Cyclops” Summers (Tye Sheridan) are able to prevent Vuk from fully absorbing Jean’s powers. Jean loses consciousness from the ordeal, and troops from the U.S. Government attack and subdue Jean and the other mutants with stun weapons and power-inhibiting collars. The soldiers place all the mutants, both good and evil, onto a train to be transported to a containment facility.

While in route to the facility, Xavier tells the X-Men that he was wrong for violating Jean’s mind and not allowing her to learn to deal with her trauma. During the heartfelt confession, the train is attacked by Vuk and the D’Bari. The human soldiers are quickly overpowered by the alien forces, so the mutants are freed from their restraints to protect Jean. While the mutants deal with the bulk of D’Bari forces, Vuk arrives and heads for Jean, eliminating each mutant that stands in her way. During the battle, Xavier communicates with Jean in his mind, allowing Jean to gain control of her power and reach her full potential.

After forgiving Professor Xavier, Jean saves all the remaining mutants from Vuk’s attacks and the resulting train crash. Jean then quickly disintegrates the remaining D’Bari when they attack her in mass. Vuk makes one last effort to take the cosmic force from Jean, but Jean is now in complete control of her power. Jean takes Vuk into outer space, siphons back the cosmic power that Vuk drained from her earlier, and then kills the alien shape shifter. Jean then disappears in a burst of energy in the form of a phoenix.

In the aftermath, Professor Xavier renames the school the “Jean Grey School for Gifted Youngsters” and Beast becomes the new dean of the school due to Xavier’s retirement. Xavier travels to Paris, where he is reunited with Magneto, who agrees to play a game of chess with him. As they begin to play, a flaming phoenix appears in the sky.