The ultimate X-Men ensemble fights a war for the survival of the species across two time periods in this movie. The characters from the original X-Men movie trilogy, Wolverine, Storm, Iceman, Kitty Pryde, Magneto, Colossus, and Professor Xavier, join forces with their younger selves from X-Men: First Class, Mystique, Beast, Quicksilver, Magneto, and Professor Xavier, in an epic battle that must change the past, to save our future. 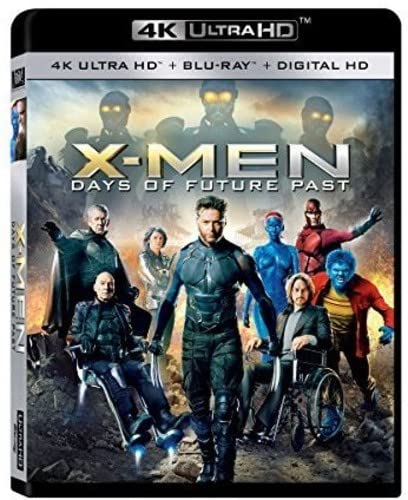 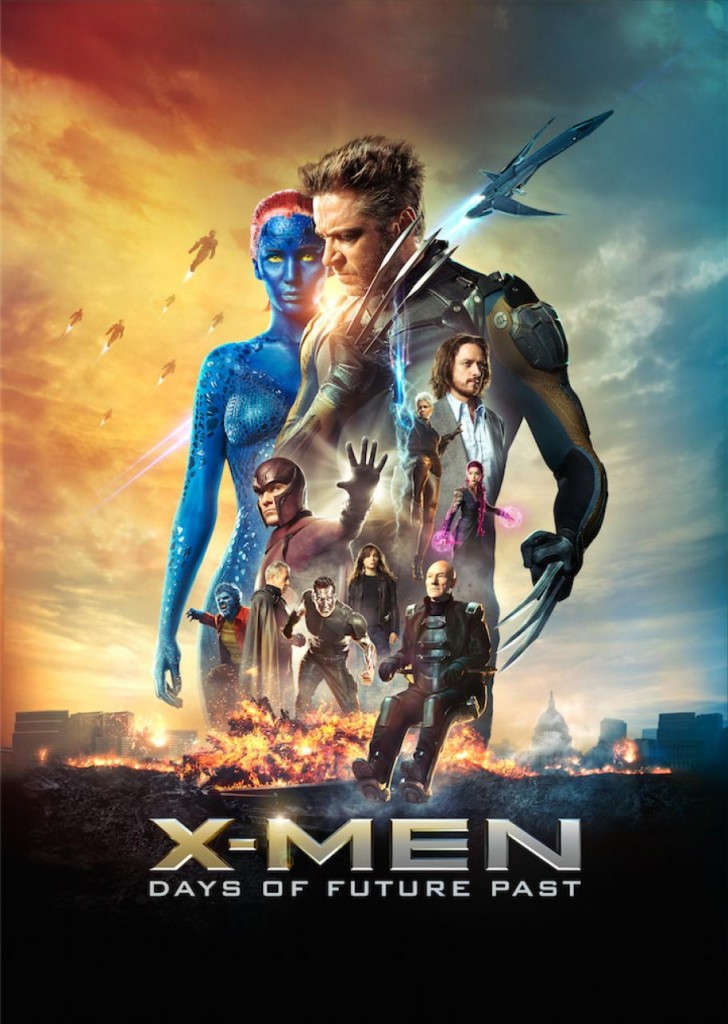 In the not so distant future of 2023, evil mutant killing robots called Sentinels have been released by humans across the Earth. Sentinels kill or capture all mutants, and any humans who try to help them. The last remaining X-Men are fighting a losing battle against the machines. They are attacked at their latest base of operations. Almost all of the X-Men are killed, but Kitty Pryde (Ellen Page) is able to send Bishop’s (Omar Sy) consciousness back in time a few days to warn them of the forthcoming attack. This allows the X-Men to change the future and avoid the attack.

The rag tag group meets up with Professor Charles Xavier (Patrick Stewart) at a remote Chinese temple. He explains the history of the Sentinels, including their designer, Bolivar Trask (Peter Dinklage). Trask was assassinated by Raven “Mystique” Darkhölme (Jennifer Lawrence) in 1973. The government took control of Trask’s designs, and after capturing Mystique, experimented on her to advance the design of the Sentinels. The redesign allowed the machines to adapt to almost every mutant power. Xavier and Erik “Magneto” Lehnsherr (Ian McKellen) have developed a plan to prevent Trask’s assassination and the subsequent apocalyptic future. Xavier believes that James “Wolverine/Logan” Howlett (Hugh Jackman) has the best chance of surviving the process due to his mutant healing powers.

Kitty sends Wolverine’s consciousness back to his younger body in 1973. He goes to the X-Mansion, but is surprised to discover the school has been closed for years. The younger Xavier (James McAvoy) shut it down after many of the students and staff were drafted during the Vietnam War. A depressed Xavier turned to alcoholism, and even took medications that allowed him to walk, but suppressed his telepathic abilities. Hank “Beast” McCoy (Nicholas Hoult) is the sole remaining member of the original X-Men team who has stayed with Xavier.

Xavier is skeptical of Wolverine and tries to send him away. However, Wolverine does not give up and convinces both Xavier and Beast to help him. They first decide to free the younger Magneto (Michael Fassbender) from a prison underneath the Pentagon. Magneto has been imprisoned for the killing of John F. Kennedy. They recruit the assistance of another mutant named Peter “Quicksilver” Maximoff (Evan Peters), who has the ability to move at incredible speeds. The foursome are successful at breaking Magneto out of prison.

Meanwhile, Mystique discovers that Trask has been experimenting on mutants, and plots to kill him at the Paris Peace Accords. Her attempt fails thanks to the timely arrival of Xavier, Beast, Magneto, and Wolverine. However, Magneto attempts to kill Mystique, believing her death would prevent the Sentinel takeover from ever happening. Beast comes to her aid and the two men fight in front of the French public, which allows Mystique to escape. However, the trio are seen by the general public, which increases public alarm over mutants. Trask seizes the opportunity to convince President Richard Nixon (Mark Camacho) to initialize the Sentinel program to combat the mutant threat.

Magneto begins to follow his own path. He retrieves his helmet, which prevents Xavier from accessing his mind. He also secretly takes control of Trask’s Sentinel prototypes. Xavier returns to the X-Mansion and forgoes any additional serum treatments, which restores his mutant powers, but cripples him again. Bolstered by his mutant powers, he is able to talk to his future self, using Wolverine as a conduit. The future Xavier is able to convince his younger self that mutant and human coexistence is the only way for there to be true peace. The younger Xavier uses Cerebro to track Mystique, and he, Beast, and Wolverine travel to Washington D.C. where Mystique seeks to make a second assassination attempt on Trask.

Mystique’s second attempt is to occur at a ceremony where the President will unveil the Sentinels. Xavier, Beast, and Wolverine are in the crowd at the event and search for the disguised Mystique. Magneto uses his magnetic powers to lift the entire structure of RFK Stadium and surrounds the White House. He also has the Sentinels stand guard around the stadium. Wolverine attempts to stop Magneto, but the Master of Magnetism impales Logan with metal and concrete and hurls him into the Potomac River. Nixon, Trask, and a disguised Mystique retreat to the White House Bunker, which Magneto rips out of the building onto the lawn of the White House. Magneto intends to kill the President in his quest for a world controlled by mutants.

Meanwhile, in the dystopian future, the X-Men are under attack by a large onslaught of Sentinels. Kitty cannot send anyone back due to already having Wolverine in 1973. The X-Men make their last stand in an attempt to buy Wolverine more time in the past. Ororo “Storm” Munroe (Halle Berry), Peter “Colossus” Rasputin (Daniel Cudmore), Blink (Fan Bingbing), Bobby “Iceman” Drake (Shawn Ashmore), James “Warpath” Proudstar (Booboo Stewart), Sunspot (Adan Canto), and Bishop are all killed in the attack. Magneto and Kitty are severely injured.

In 1973, Mystique impersonates the President and is able to get close enough to Magneto to shoot him in the neck, distracting him long enough for her to pull off his helmet. She turns to shoot Trask, but Xavier is able to persuade her not to kill the scientist. With history altered, both the Sentinels and the X-Men disappear from the Chinese temple in the future. In the past, Xavier allows both Magneto and Mystique to leave without consequence. Mystique is now considered a hero, while Magneto remains the villain. Trask is arrested for attempting to sell United States secrets to the Vietnamese.

Wolverine awakens in the X-Mansion in 2023. He finds the world is completely different, although he still has his memory of the alternate 2023. Xavier’s school is still open and there are students everywhere. Iceman, Colossus, Kitty, and Storm are still alive. Wolverine also sees an older Beast (Kelsey Grammar) and Rogue (Anna Paquin) in the mansion. He goes to Xavier’s office and sees that both Scott “Cyclops” Summers (James Marsden) and Jean Grey (Famke Janssen) are alive as well. Wolverine tells Xavier about his adventure, the one person who knows what he went through.

Back in 1973, Wolverine’s body is pulled out of the Potomac with the metal and concrete. Everyone is shocked that he is still alive as he coughs out the water in his lungs. William Stryker (Josh Helman) tells the men that he will take it from there. As Stryker turns around, it is revealed that it is in fact Mystique in disguise.

In a post-credits scene, a crowd is seen chanting to En Sabah Nur (Apocalypse) as he telekinetically elevates building blocks to build pyramids. Over his shoulder, four horsemen sit in the distance.