Out in New Mexico in 1878, John Tunstall hires five young men to work on his ranch. Tunstall is a competitor to a very greedy rancher with a lot of connections named Murphy. When Murphy’s men gun Tunstall down in cold blood, Judge Wilson’s hands are tied as Sheriff Brady is one of those men in Murphy’s pocket. However, an attorney persuades him to deputize Tunstall’s young employees, and give them warrants to arrest the murderers. Instead of arresting them, William Bonney shoots them down to start a little war with Murphy and the army. The people for their part honor him as fighter for justice. 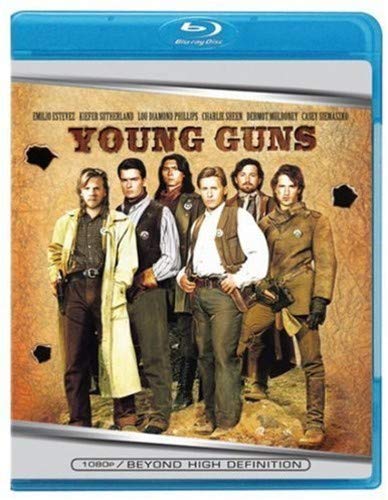 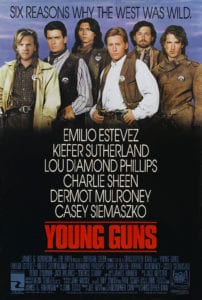 Our Mighty Ducks story begins in Lincoln County, New Mexico ca. 1878. Billy the Kid is the white man’s Tupac Shakur – a brooding thug, walking the line between law and lawlessness. Here he meets a frisky General Zod, who takes a liking to Billy, and places him in his group of strapping boy toys known as the Regulators.

They are a motley crew consisting of Julia Robert’s best friend, one of Biff’s sidekicks, Richie Valens, Jack Bower, and Mr. Tiger’s Blood himself. Zod plays John Tunstall, a proper English cattleman with a knack of making men kneel before him. He’s not gay. He’s British. Curly from City Slickers plays John’s main rival, Irishman Murphy. He’s a politically-connected gangster with Sheriff Brady in his pocket. He also has a bad Irish accent and loves to eat Chinese.

At the behest of Murphy, the Sheriff and his men take out Tunstall. Billy and his boy band can do nothing, but sit helplessly nearby and watch. After threatening a justice of the peace, he deputizes the new kids on the block in hopes of arresting the men that killed Tunstall…like that could happen.

Well, guess what? It did, so shut the fuck up, but Billy has the temper of a ginger and shoots them all dead before anyone has the chance to read them their rights. For some reason, this puts him at odds with the leader of the Regulators, Charlie Harper, and also starts a war with Murphy.

Billy then kills the Sheriff in the middle of town – nice try Hollywood – and the Regulators become wanted men with the legitimate law as well as Murphy’s hired guns. But they are like the honey badger and don’t give a shit. They continue to take out Murphy’s minions while avoiding bounty hunters and the U.S. Army.

Billy and the other Regulators end up in various gun battles throughout the film. One features the death of Charlie “the Machine” Sheen, when he takes the “winning” strategy of approaching a man in an outhouse with a shotgun while he is out in the open. Oh well, he was a “Dick” anyways.

Not everything is shoot-outs with the Sheriff for the half-grown horse riders. One of the tenderfeet, Doc, has a little case of “yellow fever.” Unfortunately, the only vaccination he can get comes in the form of Yen Sun (played by the very exotic, oh, I know I am going to mispronounce this name, Alice Carter I think is how you say it.) Yen Sun is the unclean “laundry girl” of Murphy. She secretly wants to put some starch into Doc’s pants, but can’t because of her fear of Murphy. Talk about your forbidden fruit.

Eventually, the Regulators decide to escape to Old Mexico. However, they return when Pat Garrett warns Billy that Murphy and his men plan on taking out Tunstall’s lawyer McSween.

The Regulators ride back to Lincoln, but ultimately it turns out to be a trap. (Although this doesn’t really explain why Hollywood make Garrett and Billy friends in Young Guns II.) Anyhoo, Billy and the Regulators find themselves holed up in McSween’s house surrounded by a group of Murphy’s men, bounty hunters, and the US Calvary. They’re dealing with a lot of shit here, but at least nothing’s on fire.

Oh shit, Murphy’s men set the house on fire, and the boys have nowhere to go. They throw keepsakes out the window until Billy has had enough. He packs his shit into a trunk, and jumps out of the building with the other trinkets. A slow motion gun battle plays out so that we can see the drama that is Young Guns. “Dirty” Steve Stephens and Charlie Bowdre die in the escape. (They are the least well-known actors in the film. Nobody is going to pay to see them in a sequel, and well, somebody gots to die.) In typical unbelievable Hollywood fashion, Billy, Doc, the Indian, and the China doll are able to escape through a hailstorm of bullets. Billy puts a bullet through Murphy’s head – finally ending the Lincoln County War.

The film ends with Doc and the Indian parting company alongside the crazy gringo. The audience learn through a narration that someone eventually did kill that crazy son of bitch, Billy the Kid. My guess is we will find out soon in glorious 3-D.