Young Sherlock Holmes follows the adventures of a young John Watson when he ships off to boarding school. There he meets the brilliantly bizarre Sherlock Holmes, and the two boys strike up a friendship. They soon become involved in the investigation of a number of mysterious murders, but eventually, their curiosity gets them into trouble with a dangerous religious cult. Watson and Holmes must struggle to avoid their capture while attempting to notify the authorities. 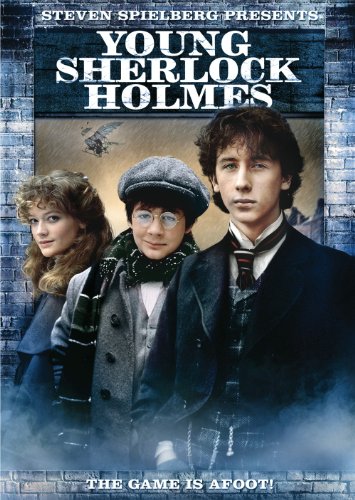 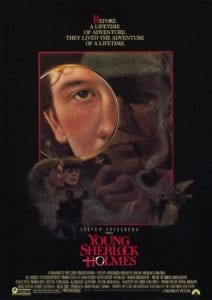 Welcome to jolly-ol’ Victorian-era London, England in the dead of winter. A dark and continually-jingling baddy, wearing a very suspicious dark cloak and hood, using a one-of-a-kind Egyptian blowgun, shoots an old gent. The two-inch poisonous dart magically disappears for the victim who immediately hallucinates in front of a bunch of people who offer no help to the poor lunatic who is obviously in distress. The victim goes home and continues to hallucinate himself into a very tragic and violent death.

Thus begins our tale of Young Sherlock Holmes with a vanity card proudly proclaiming, “The following story is original and is not specifically based on the exploits of Sherlock Holmes as described in the works of Sir Arthur Conan Doyle.” That’s right. American producer Steven Spielberg, American director Barry Levinson, and American screenwriter Chris Columbus chose to completely ignore Sir Conan Doyle’s canon of 56 short stories and four novels, countless adaptations in print and movies, and instead created something brand-new and gave the characters the iconic names of Sherlock Holmes and Doctor Watson. That’s like taking Tom Sawyer and Huckleberry Finn and having a well-intentioned Russian writing their exploits in his native tongue. It makes no sense. But I digress…

The story picks up with an elderly Dr. Watson merrily narrating as high-school-aged Watson arrives at boarding school and immediately meets the violin-struggling Young Sherlock Holmes. Within seconds we find out: Holmes has not mastered the violin in three days, he has a nasty habit of meeting people and promptly offending them by telling the person all about themselves by the tiniest details, and the pudgy Watson enjoys custard tarts. It is a rousing beginning.

Basically, Holmes lusts after the only non-kidnapped teenage woman in the entirety of London. She is also the niece of the crackpot on campus, Professor Waxflatter. Young Sherlock learns all is powers of deduction from the crazy… I mean lovably eccentric professor, who tries to fly a physics-defying airplane not once but twice off the roof and crashes horribly without a single bruise. Holmes fences with the impossibly dashing arts teacher, Professor Rathe, and he proves to be an equal with the sword.

The school bully challenges Holmes to find a fencing trophy, and he uses the most ridiculously planted clues to locate it at the very last second. The niece and her dog are out for a walk and happen to be the only people hearing the bell-jingling baddy and give chase around the all-boys’ school courtyard. All the main characters of the movie are employees or related somehow to the boarding school and hang out together in scene after scene because, you know, nobody else really matters in the story.

As two people die in unrelated instances outside the school’s walls, Holmes deduces from the very deliberate circles around articles in the newspaper in the kindly professor’s laboratory that the deaths must be related because EVERYBODY takes the time to actually circle only the articles that interest them in the paper every day. Holmes goes to the stupidly inept Sergeant LeStrade, and proclaims a murderer is on the loose. There isn’t a shred of evidence, so the police summarily thrown him out of the office. The bully frames Holmes, and the school immediately expels him for cheating; even though it’s painfully obvious to anyone who was in the room that the bully planted the note at Holmes’ feet.

When the poor professor becomes victim number three, Holmes immediately tells LeStrade it is murder! The hooded murderer is still at the murder scene when the policeman on duty show up in the nick of time to watch the poor professor whisper the one key word needed to indict the baddy. Oh, and then as the bell-jingling baddy runs off, he drops the rare Egyptian blowgun right at the feet of Watson…you can guess where this is going.

So basically, Holmes and the inexplicably dim-witted Watson discover a group of crazed hari-krishnas dressed as ancient Egyptians hiding in plain sight of jolly ol’ England, who practice embalming of lovely young maiden hostages in the exact type of crypt-slash-pyramid used in Indiana Jones and the Temple of Doom. Kids discover the ritual, and the hari-krishnas shoot them with darts that THEY can see and feel, but no other victims can. They hallucinate all at once, and then save each other in the nick of time. Kids track down clues that a six-year-old could deduce if given enough time. They take the kids prisoner.

The crazies wrap Niece in toilet paper for the ritual while boys fly away on the miraculously aerodynamic deathtrap. They narrowly escape Big Ben through an aeronautical wizard’s dexterity without ever looking for the police to help because, you know, he’s a genius. Kids crash airplane through the ice but jump to safety. They then go on a mission to shut down the baddies before niece dies, and also shut down the ritual killing in the nick of time. For good measure, they lay waste to the entire temple of dozens and dozens of heavily-armed bad guys by simply dropping a chandelier and starting a fire. Kids fight the cartoon hari-krishnas with blocks of wood versus swords but the kids prevail while Rathe gets away AGAIN with the poor maiden niece who always seems to be helpless and in distress.

The suddenly-resourceful Watson saves Holmes in the nick of time with an engineer’s dream pulley system. It disables Rathe’s getaway vehicle all with one perfectly timed rope and hook. Kids chase baddy to the ice where the sinking airplane lays in wait. Baddy shoots at Holmes but of course hits the worthless niece. Holmes and Rathe duel to the death with LOTS of brilliant banter instead of actually going for the clear kill shot over and over again. Baddy falls through the same hole in the ice as the airplane and drowns into the ice-cold river under feet of ice with no hope for escape. Holmes runs to his love only to watch her die in his arms to leave him alone because, you know, Holmes was never going to end up married because Sir Arthur Conan Doyle’s Sherlock Holmes needed to actually start somewhere.

Holmes packs and leaves school again, but not before briefly explaining to Watson how he figured it all out. However, the narrator interrupts Holmes to tell us everything we just saw. Holmes dresses up in the dead bad guy’s cloak and the dead professor’s hat because all sane geniuses do that. Watson hands him the iconic Sherlock pipe for the finishing touch.

Elderly Watson the narrator tells us all to look forward to more rollicking adventures with Holmes and Watson. Roll credits with another vanity card stating “Although Sir Arthur Conan Doyle did not write about the very youthful years of Sherlock Holmes and did establish the initial meeting between Holmes and Dr. Watson as adults, this affectionate speculation about what might have happened has been made with respectful admiration and in tribute to the author and his enduring works.” THEN as an unknown sleigh glides through the snow, we see a cloaked person get out of the sleigh, register at a foreign hotel under the name “Moriarty”, and pull back to reveal – it’s Rathe breaking the fourth wall looking at the audience with a knowing smirk when he should have drowned in the frigid water. But that wouldn’t allow for a Spielberg-produced sequel now, would it?

User Rating: Be the first one !
May 10, 2018
6 minutes read
Show More
Back to top button
Close
Close