The world still mourns the death of Superman, and Batman struggles to fill the gap left behind by the Man of Steel. However, a new danger threatens everyone on the planet Earth. The evil and powerful Steppenwolf comes to Earth with his army of Parademons to acquire three Mother Boxes that can terraform the entire planet and kill every living thing on Earth. Now, the heroes Batman, Wonder Woman, the Flash, Aquaman, and Cyborg must unite to stop the alien invader. But will they have any chance without the help of Superman? 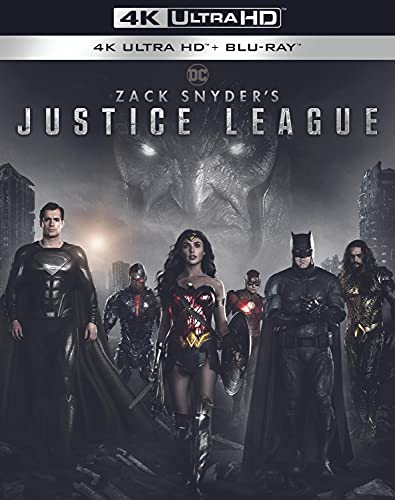 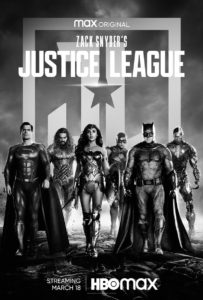 The film opens with the death of Superman aka Clark Kent (Henry Cavill) at the end of Batman v. Superman: Dawn of Justice. Superman’s death cries reverberate around the world and awaken the three hidden Mother Boxes, alien artifacts that have the ability to destroy the planet. Sometime later, Batman aka Bruce Wayne (Ben Affleck) struggles to fill the gap left by the Man of Steel and begins a quest to gather other super powered beings to form a team of heroes to protect the Earth. Bruce first travels overseas to find Arthur Curry (Jason Momoa), the Aquaman. Arthur rejects Bruce’s offer to join forces and heads back out into the sea towards Atlantis. Bruce returns to Gotham City to continue his quest.

Meanwhile, Steppenwolf (Ciarán Hinds) arrives on Earth with his army of Parademons in search of the Mother Boxes. Thousands of years in the past, Darkseid (Ray Porter) led an army that attempted to take over the Earth using the combined energies of three Mother Boxes. Darkseid was defeated by a unified force of Olympian Gods, Amazons, Atlanteans, humans, and various extraterrestrial beings, including members of the Green Lantern Corps. Darkseid was forced to retreat without the Mother Boxes. The Mother Boxes were divided up and given to mankind, the Amazons, and the Atlanteans, each group vowing to hide and protect them against Darkseid. Darkseid dispatches Steppenwolf from Apokolips to do his master’s bidding. Steppenwolf looks to regain favor with Darkseid for previously failing him. His intent is to form the Unity which will destroy the Earth.

Steppenwolf first arrives in Themyscira to retrieve the Mother Box that the Amazons possess. Queen Hippolyta (Connie Nielsen) leads her forces in a battle against the intruder, but ultimately Steppenwolf is successful in retrieving the Mother Box. The Queen sends a warning arrow to her daughter Diana aka Wonder Woman (Gal Gadot) in the outside human world. Once Diana sees the warning, she locates the arrows which leads her to an ancient temple that instructs her as to the coming danger and the history of the Mother Boxes. Diana returns to Gotham City and joins Bruce in his search for additional metahumans to help combat Steppenwolf.

Diana seeks out and locates Victor Stone aka Cyborg (Ray Fisher), a former college athlete who has been cybernetically reconstructed by a Mother Box after a nearly fatal car accident. Diana fails to persuade Cyborg to join the group, but he does agree to help them locate the threat. Bruce next travels to Central City to locate Barry Allen aka the Flash (Ezra Miller). Barry’s mother was mysteriously killed when he was a child, and his father Henry (Billy Crudup) has been falsely convicted of the murder. Unlike Arthur, Barry enthusiastically agrees to join Bruce’s proposed super group and travels with him back to Gotham City.

Meanwhile, Steppenwolf attacks an Atlantean outpost that is protecting their Mother Box. Mera (Amber Heard) leads the Atlantean forces against the alien invader, but they are overwhelmed. Aquaman arrives and joins the battle, but Steppenwolf still acquires the Mother Box and retreats. Aquaman knows the danger to the Earth is real and returns to the surface world to join Bruce’s group. At the same time, Cyborg learns that his father Silas Stone (Joe Morton) and several other S.T.A.R. Lab employees have been kidnapped by Parademons due to their interactions with the humans’ Mother Box. Cyborg also agrees to join Bruce’s group.

Back in Gotham City, Batman, the Flash, Wonder Woman, and the Cyborg receive intelligence from Commissioner James Gordon (J.K. Simmons) that leads them to Steppenwolf’s army in an abandoned facility under Gotham Harbor. The group rescues the kidnapped employees and engages Steppenwolf and his Parademons in battle. However, the facility is ruptured during the conflict and begins to flood. Only the timely arrival of Aquaman prevents the team from drowning. Once free of the danger, Cyborg leaves the group to retrieve the last Mother Box. He brings in back to Bruce and Diana so that they can analyze it. Cyborg reveals that his father used the Box to rebuild his body.  Cyborg also reveals that the Mother Boxes are “change machines” that unfaltering enforce the will of their master, destroying or restoring to life without bias. Barry proposes using the Mother Box to resurrect Superman to help them fight off Steppenwolf’s invasion.

Cyborg, Wonder Woman, Aquaman and the Flash exhume the body from Smallville and bring it to the genesis chamber in the Kryptonian scout ship in the heart of Metropolis. They place Superman’s body in the amniotic fluid of the chamber, and the Flash activates the Mother Box with his power. The plan is a success, and Superman is brought back to life. However, Superman’s memories have not returned, and he attacks the group after Cyborg’s programming initiates an attack on the Man of Steel inadvertently. The group is overwhelmed by Superman’s strength, and Superman appears to be ready to kill Batman until Lois Lane (Amy Adams) arrives. Superman stops his attack and picks up the love of his life and flies off to his mother’s home in Smallville. At the same time, Cyborg’s father Silas Stone (Joe Morton) retrieves the forgotten Mother Box and takes it back into S.T.A.R. Labs. He superheats the Box which allows Cyborg to track it around the world. Unfortunately, the process kills Silas and Steppenwolf retrieves the Mother Box and disappears.

Superman gathers himself in Smallville and reunites with his mother Martha (Diane Lane). His memories return and he tells Lois and Martha that he has been brought back for a reason. He informs them that he is going to help the other heroes and flies off to join them. Meanwhile, the remaining heroes begin to make plans to take on Steppenwolf without Superman. Cyborg tracks Steppenwolf to a small town in Russia near an abandoned nuclear power plant. The group sets out to take on Steppenwolf with the plan to keep the Mother Boxes from being united. They fight their way through the army of Parademons to reach Steppenwolf, but they cannot keep him distracted long enough for Cyborg to separate the Mother Boxes. Superman finally arrives and easily defeats Steppenwolf. However, Cyborg cannot stop the Mother Boxes from forming the Unity. The Mother Boxes destroys the Earth, but the Flash uses the Speed Force to avoid the destructive wave and to travel back in time. The Flash’s actions prevent the Unity from forming. After the Mother Boxes are separated by Cyborg and Superman, Steppenwolf is stabbed through the chest by Aquaman and decapitated by Wonder Woman before being thrown back through an open portal to Apokolips. Darkseid closes the portal and informs his loyal servant DeSaad (Peter Guinness) that he will launch an armada to invade Earth and claim the Anti-Life Equation.

After the battle, Bruce and Diana agree to set up a base of operations for the Justice League in the ruins of Wayne Manor. They also plan for more members to join. Barry gets a job at the Central City Police Department, which impresses his imprisoned father. Victor embraces who he has become and decides to no longer hide from the world. Aquaman says goodbye to Mera and his mother’s loyal servant Nuidis Vulko (Willem Dafoe) as he goes to visit his father. Superman resumes his life as Clark Kent with the help of Bruce, who gets the Kents’ house back from the bank that foreclosed.

Soon after, Lex Luthor (Jesse Eisenberg) is shown to have escaped from Arkham Asylum and sits comfortably on a yacht. Slade Wilson (Joe Manganiello) joins him on the ship, and Lex informs the assassin, who is obsessed with killing Batman, that Bruce Wayne is the Dark Knight. Later, Bruce Wayne has another dark dream of a dystopian future. In the dream, Aquaman, Wonder Woman, and Lois Lane are dead, and Superman has joined forces with Darkseid. Batman leads a ragtag team of heroes and villains, including Slade, the Flash, Mera, Cyborg, and his archenemy the Joker (Jared Leto). Their quest is to defeat both Darkseid and the Man of Steel. The dream ends with Superman finding the group. Bruce awakens in his bed. He sees the Martian Manhunter (Harry Lennix) floating outside his bedroom window. Manhunter thanks Bruce for saving the planet and bringing the heroes together. He informs Bruce that he plans to join them and that he will be in touch with preparations for Darkseid’s next move.