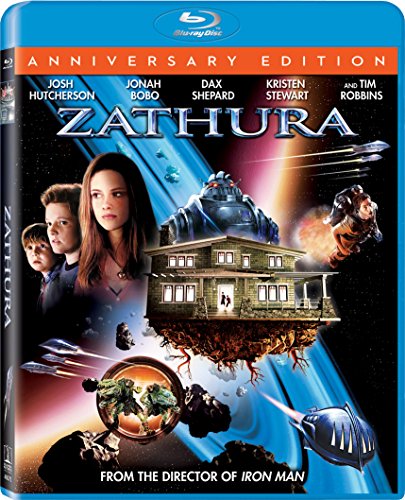 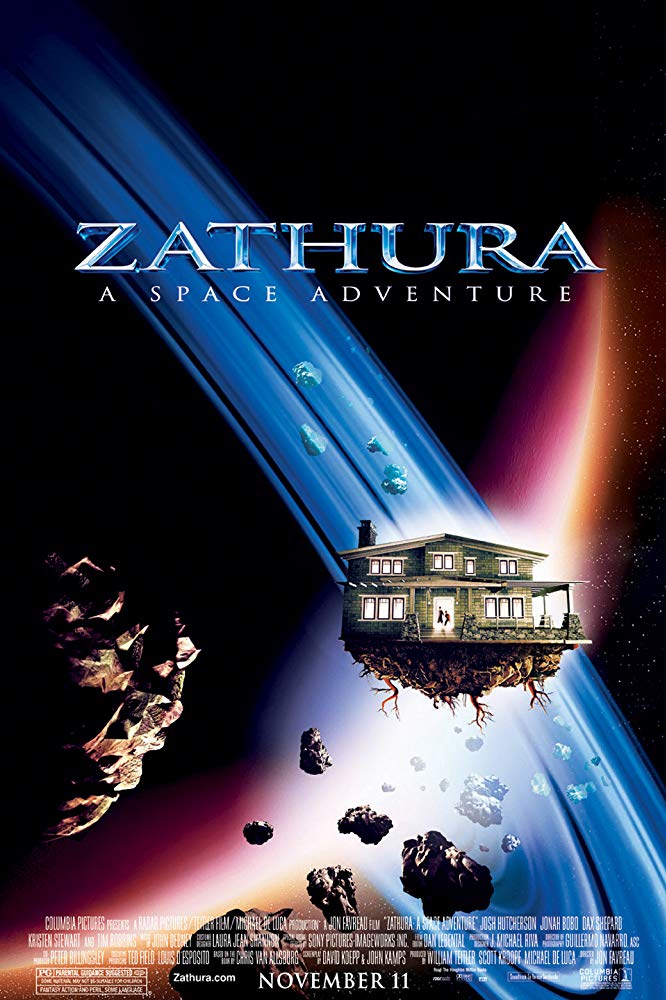 In Zathura: A Space Adventure, Walter (Josh Hutcherson) and his younger brother Danny (Jonah Bobo) are a pair of siblings who don’t get along with each other or with their older sister, Lisa (Kristen Stewart). One day, their divorced father (Tim Robbins) has to make a copy of a print for work after Danny ruins it. He leaves Lisa in charge.

While Lisa sleeps in her room, Danny tosses a baseball at Walter which hits him in the face. Danny hides in the dumbwaiter, but Walter still finds him. He sends the dumbwaiter with Danny to the basement. There he finds an old space-themed board game called Zathura hidden in the steps of the basement stairs.

Walter refuses to play the game with him, so he starts playing by himself. He presses the go button, and a card pops out of the game. It says, “Meteor shower. Take evasive action.” Suddenly, meteors bombard the living room where the boys are. They hide in the fireplace for safety. After the shower, they see the black depths of space through one of the larger holes in the roof. They open the front door to find they are no longer on Earth. It looks like they are floating on one of the rings of Saturn.

They take the game to Lisa’s room to ask her for help. However, when Walter takes his turn, , and no card pops out. His ship just moves ahead a few spaces. Lisa, thinking it’s nighttime, runs into her bathroom to get ready for her date. So Danny takes his turn which puts Lisa in a cryonic sleep chamber for their next five turns. Walter reads the game instructions on the box, and concludes the only way to return everything to normal is to finish the game they started.

Walter takes his turn, and a card pops out which tells him that his robot is defective. One appears in the hallway which is about six inches tall. It grows to a monstrous size, and attacks the boys because it thinks they are alien lifeforms. Walter makes Danny quickly take his turn in hopes of stopping the attack. It doesn’t, but Danny’s card sends the house too close to Tsouris-3. Its gravity begins to pull them into it. However, they manage to survive as the gravity sends the robot into the basement where it’s damaged. However, it begins to repair itself down there as Walter slams the door shut on it.

Walter takes his turn, and no card pops out. Danny refuses to take his turn. Instead he makes mac and cheese. However, Walter makes a deal to be nicer to him, and Danny goes. The card says a race of reptilian aliens named Zorgons will visit them. They aren’t friendly aliens, and the boys hide in the fireplace again. When their ship begins shooting at them, the boys are stuck. Walter takes his turn among the attack. His card says, “Reprogram,” but it doesn’t seem to do anything to stop the Zorgons.

Danny goes next. His card says, “Rescue stranded astronaut.” A nameless astronaut (Dax Shepard) rings the doorbell, and jumps into action. He orders the boys to help turn off all electricity and heat sources. He asks Walter to blow out the pilot light in the basement, but fearing the robot down there, he just turns the heat all the way down without blowing out the pilot light. The astronaut next sets the boy’s couch on fire, and tosses it into space to lure the Zorgons’ ship away. They take the bait.

As the astronaut eats their food, Walter asks him to leave. However, since Danny spun him it’s up to him as to whether the astronaut stays or goes. Danny lets him stay, so Walter goes back to the game. However, he starts yelling at Danny for cheating. He moves Danny’s piece back and takes his turn. The card says, “Caught Cheating. Automatic Rejection.” The game sucks Walter out into the vacuum of space, but the astronaut saves him.

Danny goes eight spaces, but the card sends him back two spaces. Coincidentally, this is also the end of five turns. The game unfreezes Lisa, but she’s freezing. When she notices the thermostat says 48 degrees, she turns the heat up! The furnace bursts back to life.

On Walter’s next turn, he gets a nine. A gold card pops out that says, “Shooting Star. Make a wish as it passes.” The boys start arguing again, and when Walter says it’s Danny’s fault their parents got a divorce, he throws the game and runs off. Just then, the shooting star passes by.

The astronaut tells Walter not to wish what he’s thinking, but Walter makes his wish anyway. He won’t tell the astronaut what he wished for. Fearing that Walter wished his brother was never born, he runs off looking for Danny. Turns out Walter just wished for an autographed football that Brette Farve signed.

The astronaut explains that 15 years earlier, he and his brother had played the game, and when he got the gold card he wished his brother was never board because they kept arguing. Without a second player, the astronaut couldn’t finish the game to return home.

The astronaut gets them to go back downstairs to finish the game, but the Zorgons have returned thanks to Lisa turning up the heat. They scavenge the living room for items to burn on their ship, and take the game as part of their tinder before leaving.

Needing the game back, the astronaut and the boys start a fire in the kitchen to get the aliens to return yet again. However, when the astronaut goes to find more wood to burn, Lisa, smelling smoke from her bathroom, goes down to the kitchen, and puts out the fire.

However, it was enough to get the Zorgons to return anyhow, and Lisa learns that they aren’t in Kansas anymore. Two Zorgon ships begin harpooning the house to board it. The four run upstairs, and hide in the laundry room. The astronaut gives them a walkie talkie, and goes to get the game. Unfortunately, he couldn’t grab it because there were too many Zorgons in the basement.

Danny says they can use the dumbwaiter to get to the basement, but the astronaut is too big to fit. In fact, Danny is the only one small enough, so they lower him down. He makes it onto one of the Zorgon ships, and finds the game. On his way out of it, a Zorgon spots his glowing-green footprint leading to the dumbwaiter that’s now broken.

It and a few others chase after him, but Walter saves him. However, the aliens trap the two on the stairwell, and when all looks lost for the boys, the robot pops out of the basement… to attack Walter. Walter shows him the “Reprogram” card he drew earlier which fixes the malfunctioning robot. It pops to life again, and attacks the Zorgons; forcing them to retreat.

With the Zorgons gone, and the game back, the boys go back downstairs to finish the game. Danny spins a nine. Walter rolls a three which sends him back three spaces to repeat the last turn. He gets another gold wish card. This time he wishes the astronaut had his brother back.

The shooting star grants Walter’s wish, and suddenly a second Danny stands before them. The astronaut reveals he is actually Walter but fifteen years older. He thanks his younger self for making a better choice than he did as a boy. The two Dannys touch hands, and merge into one before the two Walters do the same.

Guess what? The Zorgons are back, and this time they have the entire fleet to blow up the house. Before they can, Danny takes his turn, and lands on Zathura; winning the game. A final card pops out, “Game Over. Thank you for playing.”

A black hole erupts that sucks everything into it as the game board resets itself. The three kids wake up in the house as if nothing happened, just as their dad returns home. Now that the siblings have bonded, the three promise to never tell anyone about the game or their adventure. As their mother drives them off, Danny’s bicycle falls from the sky.