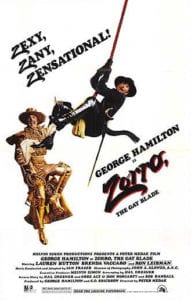 20th Century Fox released Zorro: The Gay Blade on July 17, 1981. Peter Medak directed the film starring George Hamilton, Lauren Hutton, and Brenda Vaccaro. The film is a sequel of sorts to their 1940 film, The Mark of Zorro. Besides the swashbuckling nature of the film series, Zorro: The Gay Blade is also an intentional comedy. How funny you find this film depends on whether you’re laughing at the actors or with them.

Zorro: The Gay Blade begins with Diego Vega seducing a married woman in Madrid, Spain. His father orders him home to Los Angeles, California. Once there, Diego learns of his father’s death, and his secret life as Zorro. Diego’s father leaves a letter requesting that either he, or his twin brother, become Zorro to protect the peoples.

Diego does so, but he injures his foot when he falls on his first night out. Meanwhile, his brother Ramon, now Bunny Wigglesworth, arrives after presumedly receiving the same letter from their father to come back to Los Angeles. However, Bunny Wigglesworth has to put his flamboyant spin on Zorro. Instead, he becomes Zorro: The Gay Blade, but just until Diego’s foot heals. From there, the film follows the typical storyline you’d expect; the good guys fight evil. They save the day, and the hero gets the girl…and in this case, her chastity.

Hungarian director, Peter Medak, who is mostly known for directing television shows, was at the helm of this one. George Hamilton co-produced and co-starred in this film. He was hot off the heels of the “successful” movie Love at First Bite the year before which was another comedy based on a film series from the 1940s.

The strength of this film doesn’t come from him, but rather his co-stars. Ron Leibman is the outrageously loud Alcalde. Brenda Vaccaro plays his sex-starved wife, Florinda. The under-used Lauren Hutton plays the virgin, Charlotte Taylor Wilson; a well-meaning socialite, who aims to help the peasants rise up against tyranny by distributing printed leaflets to the illiterate peoples of the town. Donovan Scott, Police Academy’s Leslie Barbara, has a nice role as Diego’s mute servant, Paco.

Zorro: The Gay Blade is an absurd film. There’s no two ways about it, but the film knows it, and it embraces it. The comedy is hit or miss. The parts where they rely on homosexual stereotypes are played out and not terribly funny, but there’s a lot of subtle humor and one-liners thrown in that make up for the bad comedy.

George Hamilton’s Diego is funnier than his Bunny Wigglesworth character, but that too relies on Spanish/Mexican stereotypes. His chemistry with Donovan Scott’s Paco never fails to amuse me. They make the absurd nature of this comedy work well.

I would say that if Ron Leibman wasn’t in the film, it would have been a complete flop. He takes the outrageous nature of the Alcalde, and turns it up to eleven. He works well with all the characters, adds little and amusing mannerisms to the role, and his non verbal acting that makes him the standout in the film. I do wish that Lauren Hutton was in the film more. She didn’t have much to do other than be Zorro’s fan girl.

Cinematography wise, Peter Medak filmed a beautiful little movie. His use of camera angles, composition, and mirrors framed a lot of actors in ways that highlighted them well. The scene where Charlotte Taylor Wilson arrives in Los Angeles is a prefect example. She’s in a carriage, and her face is in the foreground, and both Diego and Paco’s faces are perfectly framed behind her through the back carriage windows. It’s a quick little shot, but it shows that even though this is a silly little comedy, the director took pride in making the best film he could.

The music should be instantly recognizable here as it’s been used in many films. It was taken from Max Steiner’s composition in 1948’s The Adventures of Don Juan. Zorro: The Gay Blade adapted his score for this movie, and it definitely adds to the swashbuckling nature of the film.

Like I said before, this is an absurd film, and the box office results reflect that. It had a budget of $12.8 million dollars in 1980s money, and only made back $5.1 million which is probably why you can’t find it on Blu-ray or streaming on any of the major services. I’m not surprised, but despite all that, I like the film, and always have. For better or worse, there’s lines in this film I quote to this day; some 36 years after watching it for the first time. Fans of Mel Brooks’ films may like it more than others as the humor tends to lean a bit more towards that end of the spectrum. At an hour and thirty-three minutes, if you can find a copy, I’d recommend you watch it. I give this film 3 and a half stars!