In 3 Godfathers, Robert Hightower, William Kearney and Pedro Roca Fuerte try to evade a local Marshall and his posse after robbing the town’s bank. While out in the desert, the men find an abandoned wagon with a woman who’s just given birth. As she dies, she asks the men to take care of her child. They agree to her final wish before continuing into the heat. As they do their best to safely deliver the child to someone who can properly take care of it, jail, death, or both looms in their future. 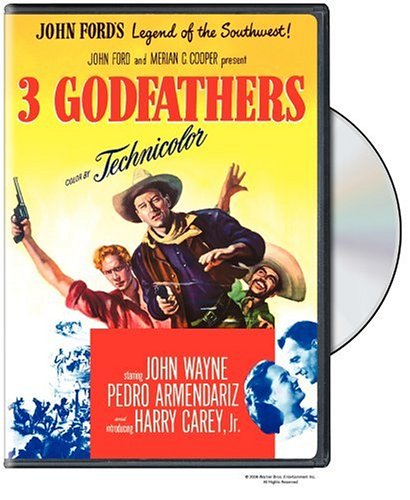 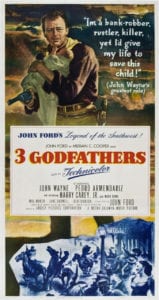 The 3 Godfathers begins when outlaws Robert Hightower (John Wayne), Pedro “Pete” Rocafuerte (Pedro Armendáriz), and William Kearney (Harry Carey Jr) aka The Abilene Kid ride into the western town of Welcome, Arizona. The three plan to rob the bank of the small town despite being some of the nicest bank robbers ever portrayed on film.

Prior to robbing the bank, the trio meets Buck Sweet (Ward Bond). He’s the town welcoming committee, and moonlights as the local sheriff. Their presence jogs Sweet’s memory about a wanted poster for the Kid. However, he’s not able to confirm his suspicions until after the robbers hold up the bank at gun point. Sweet interrupts the trio’s getaway with a bullet in the Kid’s shoulder.

The bank robbers high tail it towards the desert, but Sweet is able to put another bullet into the criminals’ water bag, severely limiting their plans to stay hydrated. The trio escapes the posse, but soon lose their own horses in a sandstorm. Hightower and the gang begin walking, looking for another water source, while trying to stay one step ahead of Sweet and his newly deputized group of mercenaries.

The trio eventually makes it to a local water hole, but finds it dried out due to a pioneer inadvertently destroying it with dynamite. Additionally, they find that the pioneer has left his pregnant wife with the wagon while he went out, apparently unsuccessfully, to find water.

The robbers help the woman deliver the baby. The mother is grateful for their assistance and pronounces that all three of them will be the baby’s godfathers. She names the baby Robert William Pedro. She extracts a promise from the three men that they will take care of the little Robert, shortly before she dies. The men vow to keep to their word despite their lack of water.

But remember this is a Christmas movie, so the trio sets out for New Jerusalem with Sheriff Sweet in hot pursuit. To add even more drama, New Jerusalem appears to be on the other side of an even more barren desert. Walking on foot, and with little very little water, the trio attempt to cross the desolate wasteland.

After the men make it across a salt flat, William finally passes away as a result of exhaustion and his gunshot wound. Shortly thereafter, Pete falls and breaks his leg. Unable to continue, Pete asks Robert for his gun to keep the coyotes away. As Robert and the baby walk away, a single gunshot is heard signifying Pete’s suicidal end.

Finally at the end of his strength, Robert nearly loses hope, but in his delirium the ghosts of his two friends appear and refuse to let him give up. Robert finally reaches New Jerusalem and enters a cantina where people are singing Christmas carols, because remember, this is a Christmas movie.

Sheriff Sweet finally catches up with Robert, and demands that Robert draw down on him. However, Robert collapses from exhaustion, and is arrested. The film then jumps ahead a couple of months to Robert’s trial. Robert is having breakfast with Sheriff Sweet and his wife. The Sweets have been taking care of little Robert while big Robert has been in jail. They ask Robert to give up custody of the baby since he is facing a long prison sentence. However, Robert refuses to do so because it would break the word that he gave to the infant’s mother.

When Robert does the same thing to the trial judge, the townspeople view him as a hero. The judge sentences him to the minimum of a year and a day. The film ends with Robert leaving to serve his abbreviated prison sentence and promises to return. And that is how a John Wayne Christmas tale should go.