King Xerxes of Persia amasses an army of hundreds of thousands for the purpose of invading and conquering Greece in 481 B.C. However, when the advancing Persian forces enter the treacherous mountain pass of Thermopylae, they encounter Spartan King Leonidas and his royal guard of soldiers numbering just 300. According to legend, their valor and sacrifice inspired all of Greece to unite against the Persian foe, planting the seeds of democracy and ushering in the Golden Age of Greece. 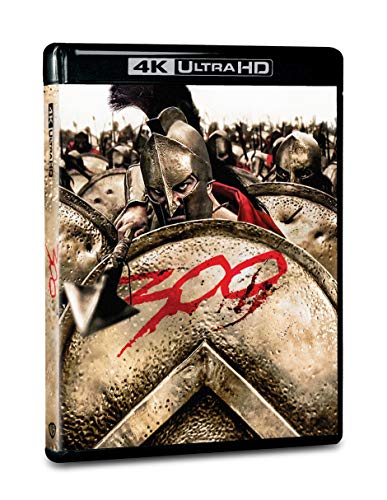 In 479 B.C., one year after the famous Battle of Thermopylae, Dilios (David Wenham), a Spartan soldier, tells other soldiers the story of the life of Leonidas I (Tyler Neitzel), from his first heroic account of killing a dangerous wolf with his bare hands as a child to his rise to kingship via the Spartan doctrine. As an adult, Leonidas (Gerard Butler) is visited by a Persian envoy (Peter Mensah) who demands earth and water as a token of submission to the rule of the mighty King Xerxes (Rodrigo Santoro). Leonidas responds by kicking the envoy into a bottomless pit and orders the death of the remaining Persian diplomats.

Leonidas then visits the Ephors, ancient advisors to the Spartans, and proposes a strategy to drive back the superior forces of the Persian army through the Hot Gates. Leonidas’ plan involves building a wall in order to funnel the Persians into a narrow pass between the rocks and the sea. Leonidas’ plan will negate the Persian’s advantage of superior numbers while also giving the Greeks’ heavy infantry the advantage over the never-ending waves of Persian light infantry. The Ephors consult Pythia the Oracle (Kelly Craig), who decrees that Sparta must not go to war during Carneia. Leonidas angrily departs, disappointed, but still determined. After Leonidas leaves, an agent of Xerxes appears and rewards the Ephors with much gold for their support of the Persian leader.

Leonidas decides to still proceed with his plan, but on a more covert basis. He gathers three hundred of his best soldiers in the guise of his personal bodyguard. Leonidas decides to take “a walk” with his bodyguard. He says goodbye to his wife, Queen Gorgo (Lena Headey), and his son Pleistarchus (Giovanni Cimmino), knowing that he will likely never return. Leonidas’ forces are joined along the way by a few thousand Arcadians. At Thermopylae, the Spartan forces construct a wall using the bodies of slain Persian scouts as mortar. An elite Spartan soldier named Stelios (Michael Fassbender) cuts off the whipping arm of another Persian emissary and tells the wounded man to return to his lines and warn Xerxes.

Meanwhile, Leonidas is visited by Ephialtes (Andrew Tiernan), a deformed Spartan whose parents fled Sparta to spare him from certain infanticide. Ephialtes asks to redeem his family’s name by fighting alongside Leonidas and warns the Spartan king of a secret path the Persians could use to outflank and surround the smaller Spartan army. Leonidas rejects Ephialtes’ request to fight despite his sympathy for the man, stating his physical deformity would prevent him from holding his shield high enough to protect the Spartan soldiers around him.

Soon after, the battle begins after the Spartans refuse to lay down their weapons to the oncoming Persian forces. They use the Hot Gates and their superior fighting skills to their advantage and repel wave after wave of Persian forces. Xerxes himself approaches the Spartan forces to discuss a parlay. He offers Leonidas even greater wealth and power if he would merely submit to the Persian King. Leonidas declines and mocks the inferior quality of Xerxes’s warriors. In response, Xerxes sends the Immortals, his elite guard to take on the Spartans. Leonidas’ men suffer small loses but defeat the Immortals.

The next day, Xerxes sends additional waves of armies from Asia which include large war elephants. However, the Spartans drive the forces off the edge of the cliff into the sea. Unbeknownst to Leonidas, Ephialtes secretly defects to Xerxes after having been spurned by his own king. He reveals the secret path in exchange for wealth, luxury, women, and a Persian uniform. The Arcadians retreat upon learning of Ephialtes’ betrayal, but Leonidas’ remaining men from his army of 300 stay and fight. After one battle, Leonidas sends the loyal, but injured Dilios to return to Sparta to tell everyone of what really happened at the Hot Gates.

At same time, Queen Gorgo continues to try to persuade the Spartan Council to send reinforcements to aid her husband’s forces. She meets with Theron (Dominic West), a corrupt politician, who claims that he owns the Council and can persuade them to support Leonidas. He threatens Gorgo, who reluctantly submits to his sexual demands in return for his help. However, Theron attempts to disgrace her by calling her a whore in front of the Council when she comes to seek their help. Gorgo kills Theron in front of the Council and reveals that he has a bag of Xerxes’ gold on his person. Upon seeing that they have been misled, the Council unanimously agrees to send reinforcements.

On the third day, the Persians use Ephialtes’ secret path and surround the Spartan forces. Xerxes’ general (Patrick Sabongui) makes one last attempt to have Leonidas surrender and avoid death. Leonidas appears to give in and kneels in submission. However, it is a ruse. Stelios uses Leonidas’ kneeling back to leap over him and kill the general. Xerxes orders his troops to attack. Leonidas throws his spear at Xerxes and barely misses him. However, as the spear cuts across the Persian King’s face, he proves to the world that Xerxes is mortal and not the God that he pretends to be. Leonidas and the remaining Spartan forces continue to fight, but eventually the Persian army overwhelms and kills them all.

Back in Sparta, Dilios concludes his tale before the Council, who are inspired by the 300’s bravery against overwhelming forces. The Greeks mobilize and rise up against Xerxes. One year later, the Persians face an army of 30,000 free Greeks led by 10,000 Spartans. Dilios, now the head of the Spartan Army, leads them into battle across the field of Plataea.