When Nancy and her friends all begin suffering violent nightmares, they all have one common theme; they all have the same disfigured killer who has a glove made of razors on his right hand. After someone kills one of the group while they slept, Nancy realizes she must stay awake to uncover the truth behind a murder named Fred Krueger. 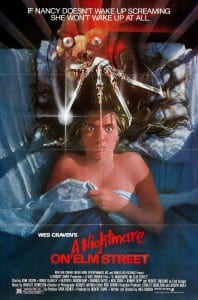 After a good rodding Tina falls into a post passion sleeps where she dreams of men with razors and farm animals. Unfortunately for Tina, the next man inside of her was Freddie, child molester, burn victim, with one glove. He also wears a Bill Cosby sweater and an Indiana Jones hat. Tina is killed by Freddie in her dream while Rod watches in the locked room.

Nancy and her boyfriend, Officer Hansen from Jump Street, find Tina carved up and Rod gone. Rod is wanted by police for Tina’s murder. Nancy learns about the investigation from her father who is the town sheriff, just back from fighting at Mr. Han’s island. Nancy tries to tell him that Rod is innocent, but he just won’t listen.

Nancy, Rod, and Officer Hansen are harassed in their dreams by Freddie and Nancy is harassed by her drunker mother in real life. Freddie is a sicko who is not only looking to kill these kids, but wants to torture them with fear. This enables Nancy to learn the secret: you can pull objects out of your dream with you.

Nancy is taken to the sleep clinic where Roger Rabbit checks her out. At the sleep clinic Nancy pulls Freddy’s Indiana Jones hat out of the dream. Nancy’s mother, disturbed by this, goes all Arthur with the booze. This is when Nancy’s mother reveals the town’s terrible secret. Drunk mom tells Nancy that Fred Krueger was a child murderer (although after a very special episode of different strokes, we all know she meant child molester). This child molester/murder got off on kids and a technicality.

The townspeople went Frankenstein on him and trapped Freddie where they burned him alive. For some reason, it wasn’t the families of the Freddy’s murdered victims who do the deed, but Nancy’s own mother who took Freddy out Mcready style. Inexplicably, Freddy’s glove wasn’t burned and even more inexplicably, like all serial killers, Nancy’s mom keeps the razor glove as a trophy of her act. They now know that Freddie has returned to take his revenge on the townspeople’s children.

Nancy and her boyfriend set out to pull Freddie from the dream where he can be killed. Unfortunately, her boyfriend is still six years from having scissors on his hands to properly combat Freddy, so he falls asleep on the job and Nancy narrowly escapes Freddie’s razors.

Freddy goes on a rampage killing Tina’s sex toy Rod, and future scissorhands himself. This forces Nancy to follow in the footsteps of one of the greatest guerilla warriors in film, no not Rambo, Macauly Calkin. Nancy goes around her house setting up all sorts of booby traps for when she pulls Freddie out of her dream.

She falls asleep and dreams. In her dream she searches for Freddy calling him out. She is able to pull him out of the dream and the booby traps work just as expected.

Finally Nancy goes down to her basement where she, like her mother before her, torches Freddy. She runs to get help from her father. Upon return it is clear that a still flaming Freddy has run upstairs to where Nancy’s passed out mother is. Freddy is found on top of mom where they both disappear into another realm. Oh, it’s not over yet.

Freddy returns for one last attack on Nancy. It’s at this point Nancy realizes the real secret: they are in and episode of Dallas and this is all a dream. She tells Freddy she knows this secret and that she’s not afraid of him and demands all those killed returned. With this revelation Freddy disappears.

The final scene shows the next day with Nancy’s mom alive and off the booze and her friends alive, waiting to take Nancy to school. And they all live happily ever after. Until, that is, the car with a Freddy sweater paint job traps the kids and drives off and Freddy grabs mom.