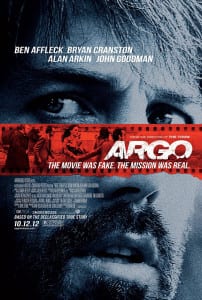 It’s getting harder to make fun of Ben Affleck – even with that beard of his, which makes him look like a cross between a Hasidic diamond merchant and the Unabomber. As Agent Smith would say – in a deleted scene from The Matrix – Affleck, whose career practically began with an Oscar (for co-writing Good Will Hunting), “seems to have lived two lives”: in one, he was the slacker generation’s action hero; in the other, he was the guy who made Gigli. But Affleck, whose onscreen persona often channels a sort of male bimbo, has become a cross between Clint Eastwood and Ron Howard, not as an actor but as a director.

Who, after a decade of tabloid press only Lindsay Lohan could envy, would think that Affleck – star of his own Charlie Sheen sideshow – could turn out films like Gone, Baby, Gone and The Town? Behind that studied glibness and frat boy silliness, there is – and probably always was – a serious dramatist. With his new film, Argo, Affleck has demonstrated that his first two offerings were anything but flukes.

Given all the choices available to a Hollywood actor/director/producer, Affleck picked the true story of CIA Agent, Tony Mendez, who came up with a daring plan to rescue a group of Americans, holed up in the Canadian embassy, after the Iranian Revolution – when 52 Americans were held hostage for more than a year. His “best bad idea,” as the movie’s trailer reveals from the outset, was to create a fake movie, so he could walk the Americans out the front door as its “cast members.”

What follows is a compelling procedural about a ridiculous plan that might just work. No film has managed to give Bryan Cranston a role as compelling as that of Walter White on TV’s Breaking Bad – though his performance in Drive! was riveting – but Argo tries. Cast as Mendez’s boss, Cranston plays the skeptic turned true believer – and bureaucratic defender. Shot somewhere between upbeat tempo of a Tom Hanks vehicle and the dispassion of a near-documentary, Argo gives history a nudge. Its most questionable advantage is its humor, which keeps the story fun, though in doing so, it also threatens to lighten the gravity of the story.

I’m not sure if Affleck made the perfect choice (Sometimes, the film feels a little too warm and fuzzy) but he sure made a good one for attracting an audience to a piece of history that is almost 35 years old. One thing Affleck doesn’t do is demonize the Iranians just to increase the conflict. While he sees the Revolution as dangerous, in its ability to become a witch hunt, Affleck takes pains not to present all Iranians as bad guys. There’s an uncanny distinction between the occupational evil of political operatives (and the innocence of those who follow them) and the innocence of ordinary people, who – politics aside – want many of the same things, and dream many of the same dreams.

Beyond Affleck and Cranston, there are some terrific performances from John Goodman and Alan Arkin, as Hollywood operatives, working their own strange world of studio production and financing. The arguments – and jabs – these two share are some of the best material in the film. In the meantime, Argo does a nice job of presenting a sympathetic portrayal of a CIA agent, at a time when the public is still drinking the James Bond Kool Aid. But unlike the Blonde Bond, who is cool, cutthroat and ruthless, Mendez is a weapon of compassion and creativity.

His job is not to assassinate the bad guys, or to hurt anyone. There is no collateral damage to assess. He’s simply a good guy, willing to place his own life on the line, to get his fellow Americans out of a very bad place at a very bad time. In telling this story, Affleck may well have limited the film’s financial success – as his tale involves no lock-and-load use of a handgun or an M16. Mendez’s key weapons are his ability to think outside the box and his willingness to lead The Charge of the Light Brigade.

Argo Movie Review by Bill Kilpatrick. Add the film to your collection today!

Acting under the cover of a Hollywood producer scouting a location for a science fiction film, a CIA agent launches a dangerous operation to rescue six Americans in Tehran during the U.S. hostage crisis in Iran in 1979.

Futurama – Episode 6: A Fishful of Dollars

Futurama – Episode 6: A Fishful of Dollars