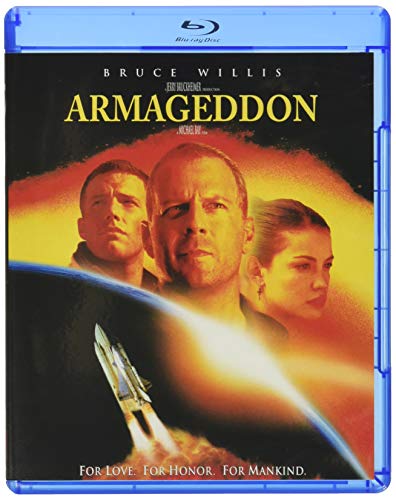 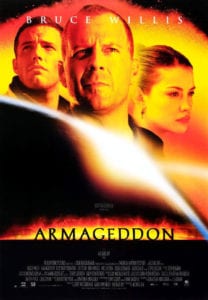 The Earth is pelted by a meteor shower that destroys the Space Shuttle Atlantis and a large portion of New York City. NASA and star gazers around the world look skyward to find answers and discover a meteor the size of Texas on a collision course for Earth. The scientists crunch their numbers and determine that the meteor will impact the planet in 18 days and will cause an extinction level event that will wipe out all life on the planet.

NASA’s best men work to come up with a plan to stop the meteor and determine the best chance for success is to drill into the asteroid and place a nuclear bomb in the core of the meteor. Once detonated, the bomb will fracture the asteroid in half and divert the two portions away from Earth.

NASA seeks out the best deep core driller on the planet, Harry Stamper (Bruce Willis), to consult with them and train their astronauts to accomplish the task. Harry, along with his adult daughter Grace (Liv Tyler), tell the head of NASA, Dan Truman (Billy Bob Thornton), that he cannot teach them what they will need to know in that short a period of time. Harry argues that the mission’s best chance of success would be for Harry and his crew of roughnecks to be launched into space with the astronauts and do the drilling themselves.

NASA puts the drilling team through a rigorous 12-day training program to prepare them for what they will experience in space. Harry and his team retrofit the design of NASA’s mobile drillers known as Armadillos so that they will better suit the needs of the roughnecks. When a second meteor shower wipes out part of Shanghai, the President of the United States and NASA are forced to reveal the information about the approaching meteor and the plans to divert it to the world.

Shortly thereafter, two advanced space shuttles, Freedom and Independence, are launched from the Kenney Space Center in Florida with the astronauts and roughnecks aboard. Once in orbit, they dock with a Russian space station to take on additional fuel. They encounter an eccentric Russian cosmonaut named Lev Andropov (Peter Stormare) who has been living on the station by himself for eighteen months. An accidental fire on the space station causes the teams to evacuate back to their ships, with Andropov, after only receiving a portion of their needed fuel.

Some time later, the shuttles slingshot around the far side of the Moon to gain speed to make their approach to the asteroid. Their ships fly into a debris field trailing the meteor and one of the Independence’s engines is hit causing it to fly out of control. The Independence flies off course and crashes into the asteroid killing everyone except A.J., Bear, and Andropov. Freedom stays on course but overshoots its landing area by 27 miles and lands on an area of the meteor that makes drilling more difficult. Regardless, Harry’s team begins to drill despite the complications.

When they fall behind schedule and the rotation of the asteroid begins to affect communications, the military initiates their secondary protocol – to remotely detonate the weapon on the asteroid’s surface. Truman opposes the plan knowing that it will not fracture the meteor resulting in the extinction level event. Truman has his team severe the uplink to the bomb, while Harry fights with Sharp in the shuttle. Ultimately, the military reestablishes the uplink to blow up the bomb, but Harry convinces Sharp to deactivate the bomb. Harry then proceeds to continue to dig with his team.

Meanwhile, A.J. and the surviving members of his team travel across the asteroid in their Armadillo. They traverse large canyons and nearly propel themselves into space by accident. They arrive at Harry’s drilling site just after the Freedom’s drilling team suffers an accident that results in the loss of Max and their Armadillo. A.J. takes over drilling of the hole.

Back on Earth, another meteorite crashes into Paris, destroying the French city. The world begins to prepare for the worst. On the meteor, Rockhound begins to suffer from space dementia and nearly kills everyone while he is messing with a weapon designed to destroy debris. Nevertheless, the drilling continues, and they make their goal of 800 feet.

Unfortunately, a rock storm hits the drilling site which kills Noonan and knocks out the Earth’s ability to remotely detonate the nuclear weapon. To explode the bomb, one person will have to sacrifice themselves and manually detonate the weapon. Everyone but the astronauts draw straws and A.J. pulls the short one. Harry escorts A.J. outside the ship and rips A.J.’s air hose out, leaving a hole in his space suit. Harry tells A.J. that he loves him and to take good care of his daughter before placing A.J. back into the return elevator to the ship.

Harry contacts the Earth one last time to say goodbye to Grace. Meanwhile, Sharp and Watts struggle to get the Freedom off the meteor. Eventually they get the engines activated and they fly off the asteroid. Harry successfully detonates the bomb at the very last minute, splitting the meteor in half and saving the Earth. Freedom lands safely back on Earth. The surviving crew returns as heroes. A.J. and Grace reunite and decide to get married. The film ends at their wedding as pictures of Harry, Bear, and Max are shown symbolizing their presence in spirit.