Two years have passed since the events of Austin Powers: International Man of Mystery. Austin Powers learns that his beautiful wife Vanessa is a fem-bot sent by Dr. Evil to destroy Austin. However, things get worse for Austin when his mojo is abducted from his frozen body in 1969 by Dr. Evil henchman, Fat Bastard. Now, Austin needs to travel back to the past to not only save the world, but to save Austin’s raging libido. 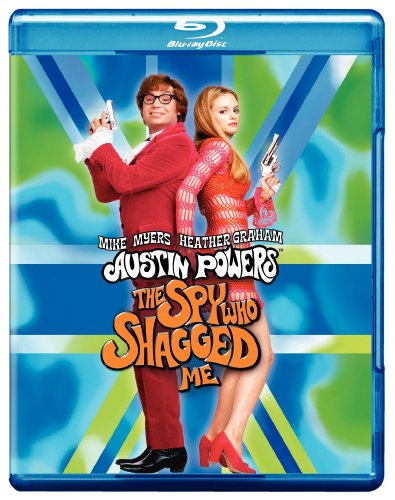 Austin Powers: Spy Who Shagged Me, The (BD) [Blu-ray]

‘Austin Powers: The Spy Who Shagged Me’ Movie Summary 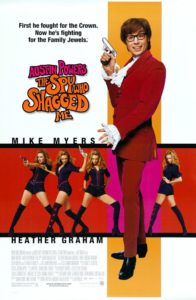 Two years have passed since the events of Austin Powers: International Man of Mystery. British spy Austin Powers (Mike Meyers) is on leave with his new wife Vanessa Kensington (Elizabeth Hurley). However, Vanessa reveals herself to be a fembot controlled by Dr. Evil (Mike Myers) and attempts to kill Austin. When she fails, Dr. Evil has the Vanessa-bot explode. Austin momentarily grieves over the loss of the love of his life, but then he remembers all the sex he will have again as a single man, and he rejoices by strolling naked through the hotel lobby.

Meanwhile, General Hawk (Charles Napier) and Johnson Ritter (Clint Howard) at a NATO base monitor the return of Dr. Evil from space. Dr. Evil confronts his son Scott (Seth Green) on The Jerry Springer Show, but ultimately the estranged father and son reunite for a new evil plan. Dr. Evil sets up his new lair in Seattle. Frau Farbissina (Mindy Sterling) and Number 2 (Robert Wagner) reveal that they cloned Dr. Evil when he did not immediately return from space. However, the clone is only one-eighth the size of Dr. Evil and goes by the name Mini-Me (Verne Troyer).

Number 2 reveals that their company had purchased a majority share in Starbucks and now can pursue legitimate and lucrative investments. Nevertheless, Dr. Evil announces his new evil plan to use a time machine to return to the 1960s and steal Austin’s mojo from his cryogenically frozen body at the British Ministry of Defence (spelled incorrectly like the British do). The mojo is Austin’s source for his sex appeal. Dr. Evil and Mini-Me travel back in time and encounter a young Number 2 (Rob Lowe) and an identical Frau. Dr. Evil dispatches his henchman Fat Bastard (Mike Myers) to steal the mojo. In 1999, Austin feels the sudden loss of his mojo while he attempts to have sex with the model assassin Ivana Humpalot (Kristen Johnston) which leaves him impotent.

The present-day Ministry determines what happened and sends Austin back to 1969 in a Volkswagen New Beetle. His arrival coincides with a riotous party at his London flat. An agent of Dr. Evil, Robin Spitz-Swallows (Gia Carides), attempts to assassinate Austin who survives the attack with the assistance of CIA agent Felicity Shagwell (Heather Graham). Austin and Felicity flee the party and are pursued by another Dr. Evil henchman, Mustafa (Will Ferrell). Austin captures Mustafa and attempts to interrogate him, but the henchman is knocked off a cliff when he is hit by a dart from Mini-Me.

Austin investigates his missing mojo and identifies Fat Bastard as the perpetrator of the crime. Meanwhile, Fat Bastard delivers the mojo to Dr. Evil at his “evil” volcano lair. Dr. Evil drinks some of the mojo and ends up having sex with Frau. Things turn awkward the day after between the couple and Frau announces that she will never be with another man. Knowing the future, Dr. Evil informs her that she is right, not knowing that Frau is the mother of Scott. Conveniently, Scott arrives from the future to help his father. Dr. Evil announces his evil plan to hold the world for ransom by threatening to destroy cities using a laser on the Moon. At the same time, Austin and Felicity get to know each other in London, but when Felicity attempts to have sex with Austin, he rejects her because of his lost mojo.

A dejected Felicity undertakes a secret mission from the Ministry to implant a homing device into Fat Bastard. Felicity has sex with the henchman to plant a tracking device in his anus. A brief time later, Fat Bastard leaves the device in a toilet at Paddington Station along with a massive bowel movement which displeases Austin and Felicity. Felicity collects a stool sample to analyze it which reveals traces of a vegetable that only grows on one Caribbean island. Austin and Felicity sneak onto the island and discover the location of Dr. Evil’s secret volcano lair. However, they are apprehended soon after.

Dr. Evil places the heroes into an elaborate death trap, but the guard protecting their cell is overcome when Felicity exposes her breasts. Dr. Evil and Mini-Me leave for the Moon to install the laser. Austin and Felicity pursue on Apollo 11. Austin and Felicity sneak aboard Dr. Evil’s moon base. Austin is attacked by Mini-Me until Austin flushes the miniature clone into space. Austin confronts Dr. Evil, who gives Austin a choice, save the world or Felicity, who is locked in a chamber with poison gas. Austin saves the world at Felicity’s insistence, but Austin’s partner dies from the gas. Austin corners Dr. Evil, who hints that Austin can use the time machine to save both the world and Felicity.

Austin uses the time machine and travels back ten minutes. He teams up with himself and saves both the world and Felicity. Dr. Evil initiates the self-destruct device on the moon base and then throws Austin’s mojo into the air. The cannister crashes into the ground and the mojo is destroyed. Felicity points out to Austin that he accomplished everything, including getting the girl, without his mojo. The couple escape the destruction of the moon base by departing through Dr. Evil’s time portal to 1999.

Back in 1999, Fat Bastard attempts to kill Austin at his own flat. Felicity disarms the assassin and saves Austin. Felicity and Austin throw a party. In 1969, Dr. Evil recovers Mini-Me from space and vows revenge against Austin. In 1999, Frau appears on The Jerry Springer Show with Scott and reveals that Scott is her and Dr. Evil’s son from 1969. The film ends with Austin returning to his flat in London to discover Felicity in bed with the past Austin. Present Austin is not mad since he and past Austin are the same person and therefore it is not cheating.