After the Japanese conquer the Philippines in World War II, Col. Joseph Madden of the U.S. Army organize guerrilla fighters against these invading enemies. 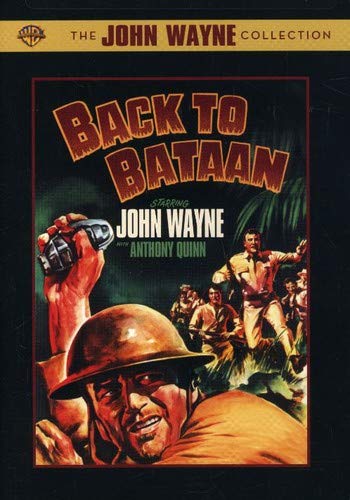 Back to Bataan (DVD) (Commemorative Amaray)

‘Back to Bataan’ Movie Summary 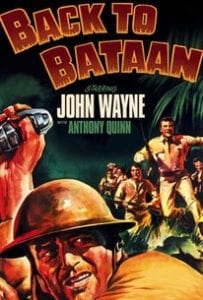 Back To Bataan begins where the story ends with U.S. Army Ranger raid at Cabanatuan prisoner-of-war camp, freeing many U.S. military personnel from their Japanese captors. The film then flashes back to March 1942 where the U.S. Army under General Douglas MacArthur struggles to hold on to Bataan against the Japanese.

In the trenches, Colonel Joseph Madden (John Wayne) orders one of his officers, Captain Andrés Bonifácio, played by Anthony Quinn, to get his shit together because he is moping over his sweetheart Dalisay Delgado who is collaborating with the Japanese and broadcasting propaganda over the radio.

After the U.S. forces withdraw from Bataan, Madden is picked to slip through the lines to organize the Filipinos resistance to fight as guerrillas against the occupying Japanese forces. Madden is also given the knowledge that Delgado is actually using the propaganda broadcasts to secretly transmit valuable information to U.S. military command. However, Madden is given strict orders not to reveal that fact to anyone, not even the deeply depressed Bonifácio.

Madden makes contact with one group of Filipino resistance fighters, but as they set out to on their first mission, they encounter middle-aged American school teacher Bertha Barnes. Barnes is an English school teacher whose school has been overrun and confiscated by Japanese military command. She and her students join the guerrillas after the Japanese hang Buenaventura Bello, the principal of her school and former student, for refusing to take down the American flag.

Tasked with their first mission to destroy a Japanese gasoline dump, Madden and his men stumble upon the Bataan Death March and realize that Bataan has fallen. Many of the Filipinos lose heart, so Madden makes a plan to rescue Bonifácio from the Death March. Bonifácio is the grandson of Andrés Bonifacio, a Filipino national hero. Madden hopes that the liberation and cooperation of the son of an independence hero will inspire the resistance.

Madden’s gamble pays off. The resistance fighters return to the village where Miss Barnes’ school was and hang the Japanese officer who ordered the killing of Bello. With the successful mission under the belt, the resistance works tirelessly over the next year to take out Japanese outposts, supply depots, military airfields and other installations.

With the resistance successfully destroying one Japanese target after another, Japenese Major Hasko attempts to bribe the local population by staging a semi-independence ceremony to reduce popular support for the Filipino resistance. Madden, Bonifácio and the guerrillas attack the ceremony, where Dalisay finally reveals her true alliance by broadcasting over the radio her plea for her people to rise up against the Japanese.

Most of the Japanese troops are killed in the raid, but young Filipino boy Maximo is captured. After being beaten, he agrees to lead the Japanese to the Madden’s hideout. However, as they near the spot, Maximo grabs the steering wheel of the Japanese truck, sending it careening down a mountainside. He dies in the arms of Miss Barnes.

Later, Colonel Madden receives orders that he is to leave the island and return to base, leaving Captain Bonifácio in command of the Filipino resistance. Several months later in October 1944, Bonifácio and his group travel to Leyte, where rumors are circulating of the impending American invasion to liberate the Philippines. After arriving on Leyte, Bonifácio is reunited with Madden. They are given the mission of taking and holding a small village to block Japanese reinforcements from repelling the impending American landing.

By trickery, Madden, Bonifácio and their men engage and defeat the Japanese garrison in a fierce pitched battle. However, two enemy soldiers get away on a motorcycle to spread the alarm. Japanese tanks and soldiers attack. The defenders manage to knock out most of the tanks, but are on the verge of being forced to retreat. Just when all seems lost, American reinforcements and tanks arrive and turn the tide of the battle.

The film closes with another short montage of several of the actual released Americans from the Cabanatuan prison camp.