In this futuristic retelling of the Seven Samurai, a young Akira farmer named Shad assembles a group of space mercenaries to help him defend his world against the evil leader of the Malmori Empire, Sador. Shad recruits the young scientist Nanelia, an Earth shipper named Cowboy, a lethal assassin named Gelt, a collective group of clones known as Nestor, a war obsessed Valkyrie Saint-Exmin, and the reptilian slaver Cayman. Together, they form a formidable fighting force but will they be enough against Sador’s ultimate weapon, the Stellar Converter, a device capable of destroying a planet with a single discharge. 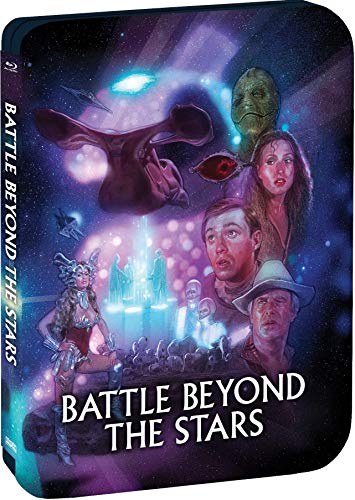 ‘Battle Beyond the Stars’ Movie Summary 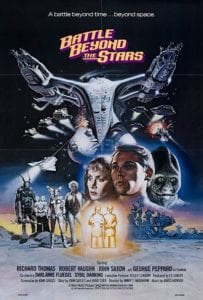 In the far reaches of the galaxy, the farming world of Akir is attacked by the evil warlord Sador (John Saxon). Sador is the leader of the Malmori Empire who use the body parts of other races to replace their own faltering limbs and organs. Sador commands the starship Hammerhead which possesses a Stellar Converter, a weapon that turns planets into small stars. Sador demands the inhabitants of Akira submit to his rule and turn over their resources to him when he returns to Akir. If the inhabitants refuse him, he threatens to use the Stellar Converter on the planet.

One of the leaders on Akir, Zed (Jeff Corey), advocates for hiring mercenaries to protect their planet since the Akira are a peaceful people. Zed cannot undertake such a mission himself due to being old and blind. The last of the famous Akira Corsairs offers his ship to anyone who will volunteer, and Shad (Richard Thomas) agrees to undertake the mission. Zed’s ship is fast and well-armed. Additionally, the ship has its own on board computer, Nell (Lynn Carlin). Nell is an artificial intelligence that is capable of running the navigation and tactical operations of the ship.

Shad sets out for the space station of Doctor Hephaestus (Sam Jaffe) in the hopes of acquiring weapons for his people. The Doctor’s planet is populated almost exclusively by androids. The Doctor is himself a cyborg, kept alive by multiple life support systems. Hephaestus refuses to help Shad and orders his androids to detain the young pilot so that he can be forced to mate with his daughter Nanelia (Darlanne Fluegel). Although Nanelia is quite beautiful, Shad cannot bring himself to abandon his people and convinces Nanelia to help him escape. Nanelia is perplexed by Shad and his mission and decides to follow the Akira pilot in her own ship. Eventually, the two pilots split up to look for more mercenaries.

Shad next encounters Cowboy (George Peppard), a freighter-pilot from Earth. Cowboy is being attacked by Space Jackers while he is delivering a shipment of laser weapons to the planet Umateal. Shad fights off the Jackers with Nell’s assistance, and Cowboy is grateful. When Sador destroys the planet that Cowboy is supposed to deliver his weapons to, the Earth pilot offers them to Shad and Akir instead. Shad convinces Cowboy into teaching the Akir how to fight, although Cowboy has no interest in fighting himself.

Next, Shad encounters a collective intelligence in the form of Nestor. Nestor consists of five alien clones who share a group intelligence. Nestor’s life has become rather dull and the five aliens collectively decide to join Shad’s quest to entertain them. Nestor even refuses payment which is beneficial for Akir since they have limited resources. Soon after, Shad encounters Gelt (Robert Vaughn), a wealthy assassin who is forced into hiding due to the many bounties on his head. Gelt also agrees to join Shad’s mission in return for a meal and place to live peacefully for the remainder of his days. Gelt’s ship is armed with advanced weapons and highly maneuverable. Finally, Shad meets Saint-Exmin (Sybil Danning), a Valkyrie warrior. Saint-Exmin thirsts for battle and immediately agrees to join Shad’s mission. Her ship is small, but extremely fast with much firepower. Shad is put off by the Valkyrie’s lust for violence, but allows her to join his quest.

Meanwhile, Nanelia is captured by a reptilian slaver named Cayman of the Lazuli (Morgan Woodward) while she is waiting for Shad to return. Cayman’s ship is powerful and crewed by a large assortment of aliens of various races. Nanelia explains to Cayman that she is seeking mercenaries to defend Akir against Sador. Cayman seeks revenge against Sador for destroying his home world years before. The reptile agrees to join the mission in exchange for Sador’s head.

Back on Akir, Shad’s sister, Mol (Julia Duffy) is captured by two Malmori warriors who intend to rape the young girl. The arrival of Shad and his companions frightens the two Malmori into trying to escape. Mol interferes with their controls which allows Gelt to destroy their ship, killing everyone onboard, including Mol. Once on the planet, the Akira people greet the mercenaries with hesitation.

Soon after, Sador returns to Akir with his Malmori forces. Shad’s hired warriors intercept the invading forces. Space battles ensue. Gelt attacks the Hammerhead, which shoots down the assassin’s ship, killing him. Cowboy leads the Akira forces with the weapons that he brought. They fight off the ground invasion forces but suffer critical losses, including the death of Zed. The Nestor allow one of their clones to be captured. The captured clone allows himself to be tortured and killed. Per Malmori custom, Sador has the captured Nestor’s arm amputated and placed on him. Due to the collective nature of the Nestor, the remaining Nestor attempt to kill Sador with the arm by grabbing a knife and trying to cut the warlord’s throat. They are unsuccessful, and Sador has the rogue arm removed.

Sador launches a second wave of ships for an attack. Saint-Exmin blows herself up to knock out Sador’s Stellar Converter. Sador’s fighters are all eliminated, but the Hammerhead is still able to destroy the remaining mercenary ships, including Cayman and Cowboy. Shad’s ship is the only remaining ship, but even Nell is severely crippled. Shad’s ship is captured in the Hammerhead’s tractor beam. Nanelia and Shad activate Nell’s self-destruct program at the ship’s insistence. Shad and Nanelia use an escape pod to get away. Nell detonates the ship which causes Sador’s Stellar Converter to backfire and disintegrate the Hammerhead and Sador.

Shad and Nanelia return to Akir. Nanelia laments over the loss of her compatriots who gave their lives for Akir’s cause. Shad shares with her the Akir belief that nobody is truly dead when they have been loved and are celebrated by the living. He tells her that the Akira will always remember the sacrifices made by the mercenaries, who will forever be honored in the legends of Akir.