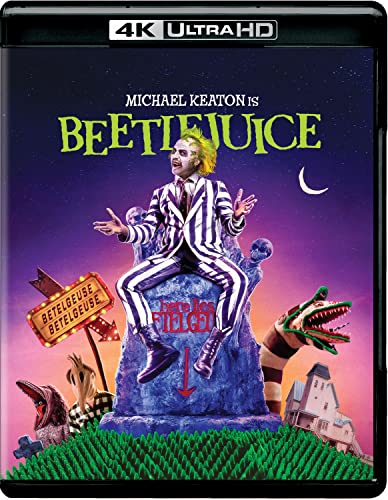 The summary below contains spoilers.
Beetlejuice takes place among the rolling hills and towering trees of a sleepy New England town in the countryside. It’s the home of Barbara (Geena Davis) and Adam (Alec Baldwin) Maitland who are happily enjoying their staycation. Barbara is busy homemaking as Adam works in that attic on his model of the town he’s built.

The local realtor, Jane (Annie McEnroe), thinks their house is too big for just two people, and wants to re-sell it for them. The Maitlands turn down her offer, and head to town for some errands. On the way back home, Adam swerves the car to avoid hitting a dog. It falls off the bridge (the car) and into the river where they drown.

However, the two aren’t aware they’re dead. They find themselves back home, but aren’t sure how they got there. Confused, Adam decides to retrace their steps outside, but when he opens the door, he finds he’s on some strange sand-worm-infested desert land. He immediately goes back inside, but a frightened Barbara says he was gone for two hours. While he was out, she found a book on the table titled Handbook for the Recently Deceased.

After some unknown amount of time, Jane sells the Maitlands’ house to the quirky New York family, the Deetzes—father, Charles (Jeffrey Jones); mother, Delia (Catherine O’Hara); and their daughter, Lydia (Winona Ryder). Charles bought the home to get peace and quiet from the Big Apple, but Delia is too much of a social butterfly to fit into a small town. To distract herself for a short time, she hires a decorator named Otho (Glenn Shadix) to make the house more livable. Apparently, Barbara’s decorating sense isn’t to her liking.

Adam and Barbara can not stand the Deetzes, and decide to scare them off with a good old fashioned house haunting. It doesn’t work as the living can not see the dead. So the two run up to their safe place, the attic, for refuge, and lock the door. However, when Lydia finds a skeleton key, she tries to open the door.

As Adam and Barbara prevent her from coming in, the TV in the room springs to life. From it, a ghost with the most named Beetlejuice (Michael Keaton) advertises his services to scare the living for a price. Instead, the two consult the handbook which shows Adam how to create a door that takes him and Barbara to a waiting room in the afterlife.

They find the place littered with other souls who’ve met similar or more gruesome fates. In time, the two are ordered to a special room which turns out to be one in their home which Delia and Otho redecorated. There, they meet their case worker, Juno (Sylvia Sidney). She criticizes their feeble attempts at haunting the house before cautioning them about the man they saw on TV.

As she leaves, the two set out to scare Charles and Delia again. This time, they dress up in sheets and make spooky noises. Again, it doesn’t work, but this time too, Lydia hears their annoying noises, and she goes to see where it’s coming from. Both are surprised when Lydia is able to see them after they remove the sheets. She says that she found their handbook, and read a passage that says live people ignore the strange and unusual, but since she too is strange and unusual, she sees them.

The Maitlands then ask Lydia for help get her parents out of their house. She agrees, and tries, but Charles and Delia ignore her—very strange and unusual indeed. While contemplating what to do now, Barbara spots a glowing light in a the graveyard of Adam’s model that belongs to Beetlejuice. When she says his name three times, he transports the two into the model. As Adam digs up his body., Beetlejuice explodes out of it. The two find him to be uncouth and crazy. So they decide they will get the Deetzes out themselves.

When Delia throws a dinner party to show off her art, the Maitlands haunt the group into singing the Banana Boat Song before their shrimp cocktails turn into hands that grab them and push them over in their chairs. The Maitlands are giddy from a successful haunting, and rush up to the attic to watch them run out of the house in terror.

The Deetzes don’t do that. Instead, they excitedly ask Lydia to bring them down. When they refuse, the party goes up to them in the attic where they demand the Maitlands show themselves. While they don’t find anyone there, Charles falls in love with Adam’s miniature of the town. The nosy Otho steals the Maitland’s handbook on the way out.

As they leave the room, Charles decides to figure out a way to make money off the haunted house. However, Beetlejuice quickly replaces his excitement with horror as he transforms into a large snake. He grabs Charles by the leg, and then holds him above the stairs. The family freaks out, and Otho tumbles down the stairs as Beetlejuice drops Charles to the first floor. Barbara calls Beetlejuice’s name three times to get rid of the snake. Thinking one of the Maitlands was the snake, Lydia wants them to leave her and her family alone.

This doesn’t sit well with Juno, and she calls the Maitlands back to her office. She chastises them for having photos taken of themselves, letting Beetlejuice out, and letting Otho get hold of the handbook. She then tells the Maitlands to work harder on their scare game who then change their faces into more grotesque forms. However, Barbara has a few misgivings as she now likes Lydia.

Lydia decides to end it all

While they are with Juno, Lydia decides to commit suicide, and goes to the attic to say goodbye. It’s there she meets Beetlejuice in the model. He tries to convince her that he can find the Maitlands for her, but first she needs to say his name three times. She almost does so until she realizes that Beetlejuice was the snake, and doesn’t really think he can help her find the Maitlands.

Adam and Barbara return from Juno’s just in time to talk some sense into Lydia. Nobody really wants to be dead. She lets Lydia know that they’ve decided not to scare her family anymore, and they can stay.

Just as all seems to be well in the Maitland world, Otho and Charles barge into the attic. Lydia and the Maitlands hide from them as Otho and Charles take Adam’s model of the town downstairs. Charles’ business partner, Maxie Deen (Robert Goulet), is coming to hear Charles’ pitch to turn the town into a theme park for the paranormal. Charles asks Lydia bring the Maitlands down as their guests, but she refuses. Otho says it doesn’t matter, and he produces the handbook he stole.

He uses it, along with the Maitlands’ wedding clothes, to perform a seance that forces the dead couple to appear before them. However, Otho can’t control the spell, and the Maitlands begin to decay into corpses.

Lydia’s frantic to help them, but doesn’t know how. It’s then that she spots Beetlejuice in the graveyard, and asks for his help. Beetlejuice says he will on one condition—that Lydia marries him. She agrees to this, and it’s showtime.

Beetlejuice easily saves the Maitlands, but he also holds Lydia to her word. He takes Charles and Delia hostage to witness the ceremony as Otho escapes. Adam and Barbara do their best to stop Beetlejuice, but he’s ready for them. He sends Adam into his model, and transports Barbara to the weird sand worm planet. Eventually, Barbara manages to ride a sand worm into the house to take out Beetlejuice—saving Lydia.

In the days that pass, the Maitlands and the Deetzes learn to live together as one happy, haunted family. Lydia has a new outlook on life while Beetlejuice tries not to lose his head in some dreary waiting room out in purgatory.