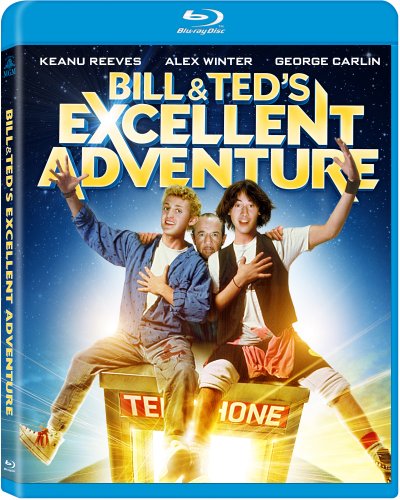 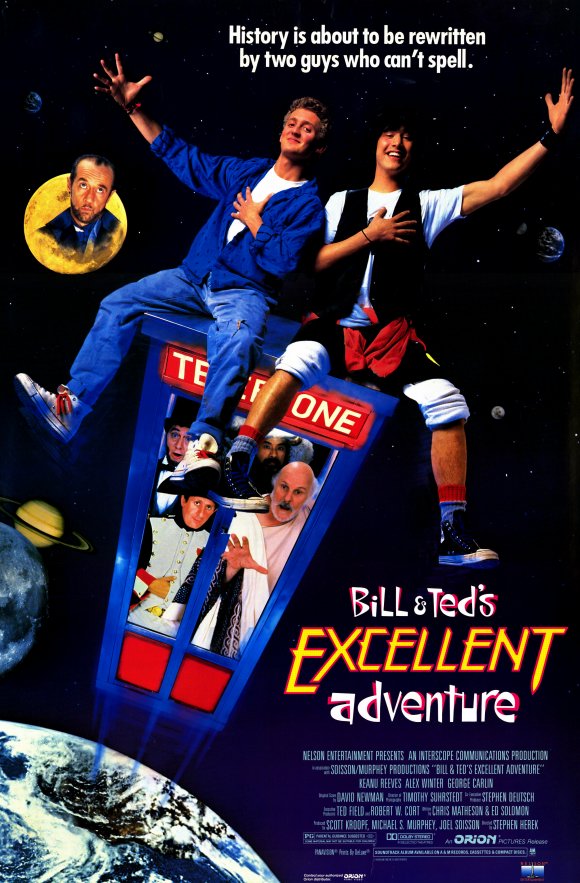 Bill & Ted’s Excellent Adventure begins in San Dimas, California, 1988. We meet two slackers named Bill S. Preston Esquire (Alex Winter) and Ted “Theodore” Logan (Keanu Reeves) who would rather pursue the success of their band, the Wyld Stallyns, than do schoolwork. However, the boys are failing history, and need an A+ on their history report if they want to pass the class.

Ted’s father (Hal Landon Jr.) is a strict police captain who thinks Ted is in severe need of discipline. If he flunks history and out of school, he’s sending Ted to military school; ruining their dreams of success. Unfortunately, the two can’t get their act together long enough to put together a final report for the class which describes how they think three historical figures would see modern-day San Dimas.

In another day and time, seven hundred years in the future to be precise, humanity lives in a utopian society based on the Wyld Stallyns’ music. The supreme beings who govern this age, send a man named Rufus (George Carlin) to travel back in time via a time machine fashioned as a phone booth, to help Bill and Ted pass their class.

Rufus finds the boys in a Circle K parking lot, and introduces himself. As they talk, a second phone booth arrives with the future versions of Bill and Ted inside. To prove who they are, the younger versions want to know the number they are we thinking of; it’s 69 of course. The older versions tell them they can trust Rufus, chat with him briefly, and leave.

As a quickie tutorial on how to use phone booth, the three head to Austria in 1805 where Napoleon Bonaparte (Terry Camilleri) commands the French Army. When they leave from the machine’s demonstration, a nearby explosion knocks Napoleon into the phone booth’s wake; sending him to the present day as well.

Once at Ted’s house, Rufus gives the boys some final words of advice before leaving in a newly arrived phone booth. When they find Napoleon lurking nearby, they get a bright idea to take historical figures from the past to bring them to the present for their report. They leave Napoleon with Ted’s younger brother, Deacon (Frazier Bain), and head out to the past.

They nab, Billy the Kid (Dan Shor) from 1879 and Socrates (Tony Steedman) from 410 BC before landing in 15th century medieval England. There they meet two princesses, but when their father the king discovers them, he orders his men to throw the two into the Iron Maiden before ordering their heads lopped off. Billy and Socrates swoop in for the rescue, but in their hasty escape, a knight’s mace damages the phone booth’s antenna.

The phone booth is full of people when the boys finally see the broken antenna, and they make a pit-stop in prehistoric times to make repairs. Using chewing gum and pudding cups, Bill and Ted repair the booth and then try to return to the present, but they end up at the Circle K from the night before to meet themselves from that night. They repeat their advice to themselves about Rufus as he then briefly chats with them to tell them that time’s not on their side.

A quick trip back to their present gives them a few hours before their presentation. The boys wind up leaving the historical figures at the San Dimas mall to give them an idea of what their town is like. However, Deacon ditched Napoleon the previous night after he embarrassed him, and now the boys need to find him.

They track him down at the local Waterloo water park, but when they return to the mall, the historical figures have caused so much trouble, that they are now in jail, and Ted’s father refuses to set them free. The boys then develop an elaborate plan to use the time machine after the presentation to hide things they can use to free the historical figures now. They find the items they will soon hide, and free the group.

The boys get an A+ on their history report, and then return to practice their music. Rufus shows up with the two princesses in tow; having rescued them himself since he knows they will be the boy’s future wives and bandmates. The band starts to play horrible music to which Rufus reveals to the audience, “They do get better.”