A twisted tale told by Harley Quinn herself. The Joker and Harley break up, which places a target on Harley’s back. At the same time, Gotham’s most nefariously narcissistic villain, Roman Sionis, and his zealous right-hand, Zsasz, put a target on a young pick pocket named Cass after she steals a valuable diamond. The large bounty has the city turned upside down looking for her. Harley, Huntress, Black Canary and Renee Montoya’s paths collide, and the unlikely foursome have no choice but to team up to take Roman down. 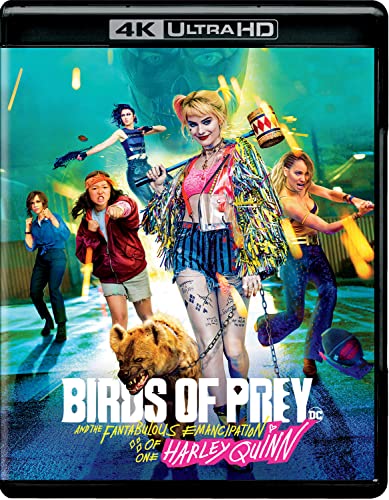 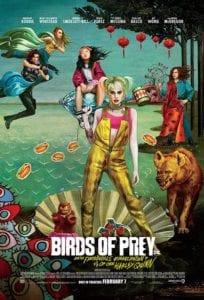 Birds of Prey begins with the Joker (Jared Leto) breaking up with his girlfriend and partner in crime Harley Quinn (Margot Robbie) shortly after the events in Suicide Squad. Back on the street and by herself for the first time in a long time, Harley struggles to find her way. She gets drunk, cuts her hair, takes up roller derby, and adopts a hyena that she names after Bruce Wayne.

One night, Harley is drinking at a nightclub owned by Roman Sionis (Ewan McGregor). Roman is a ruthless crime lord also known as Black Mask. No one knows that Harley and Joker have broken up, so Harley does whatever she wants due to everyone’s fear of reprisal by the Joker. She meets Roman’s singer Dinah “Black Canary” Lance (Jurnee Smollett-Bell) who looks down on Harley but feels sorry for her. Harley leaves the club and decides to blow up the Ace Chemicals factory, the place where both the Joker and Harley Quinn were born from. The destruction of the factory announces to the world that Harley and the Joker are no longer together, placing a target on Harley’s back.

Gotham City Police Detective Renee Montoya is investigating Roman and a series of mob killings carried out by a crossbow-wielding vigilante. She realizes that Harley’s pubic announcement will place her life in danger. Montoya approaches Dinah about being an informant for the police as to Roman’s operation, but the singer refuses the request. Roman sends out his men to collect Harley seeking to get a little payback from her. Harley is still wandering around in a drunken stupor when Roman’s men try to abduct her. Dinah intervenes to fight off some of the men. Nevertheless, Harley is captured. Roman sees Dinah fighting and decides to promote her from singer to his personal driver to replace his previous driver whose legs were broken by Harley.

Soon after, Roman sends Dinah and Victor Zsasz (Chris Messina) to retrieve a long-lost diamond embedded with the account numbers to the Bertinelli crime family fortune. The Bertinelli family were massacred years prior, and everyone has been looking for the diamond ever since. A young pickpocket who lives in Dinah’s building, Cassandra “Cass” Cain (Ella Jay Basco), steals the diamond from Zsasz’s pocket. Unfortunately, Cass is arrested a few minutes later for shoplifting and is forced to swallow the diamond so that the police don’t confiscate it. However, Zsasz knows that Cass has the diamond and reports the information back to Roman. Dinah contacts Montoya and tells her to protect the young girl.

Back at Roman’s headquarters, the mob boss is preparing to kill Harley when he is informed about the diamond’s theft. Harley offers to break into GCPD to free Cass in exchange for her release. Roman reluctantly agrees and sends Harley out to retrieve the young girl. However, he hedges his bets and places a half million bounty on Cass’s head. Harley frees Cass but is forced to fight her way through an army of criminals trying to collect on the bounty.

Harley takes Cass back to her hideout, an apartment above Doc’s (Dana Lee) Chinese restaurant. The duo is also being stalked by the crossbow killer who is known as The Huntress (Mary Elizabeth Winstead). The Huntress is actually Helena Bertinelli, who survived her family’s massacre. Helena spent the years since the massacre training herself to become an assassin to enact her revenge on those responsible for her family’s death.

Doc sells out Harley and reveals her whereabouts in exchange for his life. Harley calls Roman and offers to turn Cass over to him in exchange for Doc’s safety. Harley and Roman agree to meet at an abandoned amusement park that Harley and the Joker used to use as a hideout. Dinah informs Montoya of the rendezvous, but her call is overheard by Zsasz who informs Roman.

At the park, Harley expects to find an arsenal of weapons in the hideout but is disappointed to learn that the Joker has cleaned most of the weapons. Montoya arrives and confronts Harley, but the pale criminal knocks the detective out of a window. Zsasz and Dinah arrive and tranquilize Harley. Zsasz reveals is awareness of Dinah’s betrayal and holds her at gunpoint. The Huntress shows up and kills Zsasz, the last man involved in her family’s massacre. Montoya returns, and a stand-off ensues between everyone. Suddenly, Roman arrives with an army of henchmen. The women put aside their differences and agree to fight Roman’s forces together.

During the battle, Cass is captured by Roman. Dinah reveals that she has metahuman abilities and uses her supersonic-level screaming to take out most of Roman’s men. Harley pursues Roman on roller skates. She is joined by the Huntress. Roman is cornered on a pier by Harley and the Huntress. He prepares to kill Cass, who pulls a ring from a grenade that she slipped in his jacket after taking it from Harley’s weapons. Harley throws Roman off the pier just before the grenade explodes. Roman is blown apart and dies.

In the aftermath, Montoya quits the GCPD. She joins Dinah and the Huntress to form a team of vigilantes known as the Birds of Prey. They use the money from the accounts that were embedded in the diamond to fund their operations. Harley and Cass sell the diamond itself to a pawnshop and start their own contract killing business.

In a post credits audio sequence, Harley begins to reveal a secret about Batman, but the film ends mid-sentence.