In the college town of Bedford, an unwelcome guest arrives during the Christmas season. As the residents of sorority house Pi Kappa Sigma prepare for the festive season, a stranger stalks the house. What starts off as a series of obscene phone calls turns into a psychopathic obsession. One by one, someone is killing the house’s members, and although the police try to trace the calls, they discover that now all is as it seems this Black Christmas. 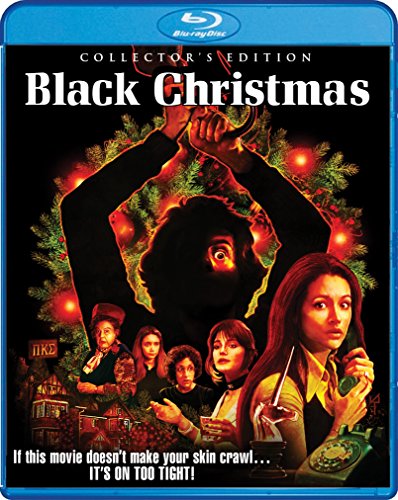 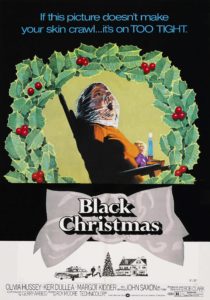 Black Christmas begins from the perspective of an unknown man climbing up a trellis of Pi Kappa Sigma’s sorority house as the girls throw a Christmas party in the college town of Bedford. Three stories up, the man enters the building through the attic.

We cut to the house phone ringing, and Jess (Olivia Hussey) answers it. On the other end is an obscene caller who has called them before. The other girls in the house gather to listen as the disturbed man rants in strange voices on the phone. Barb (Margot Kidder) grabs the phone from Jess, and proceeds to insult the caller. He in turn, promises to kill her.

Barb is a bit drunk, and she proceeds to insult a younger student named Clare Harrison (Lynne Griffin) when Clare suggests the caller could be dangerous. Upset, Clare returns to her bedroom to finish packing for the Christmas break. By now, the intruder has left the attic and is in Clare’s closet. When she goes in it, he suffocates her with a plastic dress bag, and takes her body up to the attic.

The next morning, Clare’s father (James Edmond) arrives at the school to pick up his daughter. When she fails to show up at their meeting place, he becomes a bit alarmed. Once he finds her sorority house, Mrs. Mac (Marian Waldman), the sorority’s housemother, is surprised Clare didn’t show up, but then, she’s a bit drunk herself.

Elsewhere on campus, Jess meets with her boyfriend, Peter (Keir Dullea), and informs him that she’s pregnant with his child. When she tells him she’s going to get an abortion, Peter flips out, and the two agree to discuss it later that night.

Once back at the sorority house, Jess receives another obscene phone call. However, this one is more graphic with the killer speaking in different voices. He also refers to Agnes and Billy as if two adults were talking down to them. This adds to Jess’s distress over her pregnancy.

By now, Mr. Harrison is at the police station with Barb and Phyl (Andrea Martin) to report Clare missing. However, the inept officer, Sergeant Nash (Doug McGrath), shrugs them off; thinking Clare’s just run off with her boyfriend. At the same time, Peter’s at his audition where his anger gets the better of him, and he fails it miserably.

Back at the sorority house, Mrs. Mac tells Jess that Clare is missing, and she then tracks down Clare’s boyfriend, Chris (Art Hindle), at his hockey practice. When she tells him about Clare’s sudden disappearance, and the police aren’t doing anything, he takes her to the police station. There, he demands help from Lieutenant Ken Fuller (John Saxon), whom he knows. Fuller agrees to look at the case; especially after learning that a 15-year old girl also vanished while walking home from school the same day.

Back again at the sorority house, Barb is white girl wasted during dinner with Mrs. Mac, Phyl, and Mr. Harrison. She begins ranting about how everyone thinks it’s her fault Clare’s missing which pisses off Phyl. She tells Barb to go to bed… which she does.

Chris and Jess show up next with news about a search party for the young girl, and they, along with Mr. Harrison and Phyl help search in the nearby park where she disappeared. Once out of the house, Mrs. Mac packs for a getaway to her sister’s, but the killer begins making cat noises in the attic. When she heads up there, she discovers Clare’s body. The killer throws a crane hook into her face, which impales and kills her.

Over in the park, the police find the young girl’s disfigured body, so Jess returns home while the other continue their search for Clare. The phone rings again, and Jess gets another obscene phone call. This time, she immediately calls the police. As she talks to Sgt. Nash, Peter comes up from behind her which scares the bejesus out of her. Apparently, he has been napping in her room until she returned home. Once again, Sergeant Nash shrugs off the call for help. However, Lieutenant Fuller overhears it, and angrily scolds him for not taking it seriously considering the present circumstances.

Back at the sorority house, Peter tells her he’s quitting school and wants them to get married. Jess refuses, and doubles down on her decision to have an abortion. Peter leaves in a huff as Lieutenant Fuller arrives with a man to bug their telephone so they can trace the calls.

Once the police leave, the killer enters Barb’s room, and murders her with a glass unicorn as some Christmas carolers sing to Jess at the front door. Another obscene phone call puts an end to the happy moment, but this time, the caller repeats some of what Peter said during their argument; raising suspicions that Peter is somehow involved.

Lieutenant Fuller immediately calls Jess to tell her the phone call was too short to trace, and asks her to see if she can keep him on the line longer. Now he begins questioning her about Peter; thinking he’s a suspect, but Jess doesn’t believe it’s him. Moments later, when Phyl goes to Barb’s room, the killer murders her too.

Jess immediately gets another obscene phone call about Agnes and Billy. (The calls always come immediately after a murder.) This one is long enough for the telephone company to trace, and it’s coming from Mrs. Mac’s personal line upstairs. Fuller has Sergeant Nash call Jess, and tell her to immediately leave the house as he’s five minutes away.

Instead, Jess goes upstairs to get Barb and Phyl; not knowing they are already dead. She grabs a poker from the fireplace for protection before heading up. As she discovers Barb’s and Phyl’s bodies, the killer appears to her. He chases Jess through the house, but Jess is able to make it down to the basement where she bolts the door behind her.

The killer manically tries to break the door open, but eventually gives up. Jess hears footsteps that sound as if he’s left out the front door. Unsure, she stays put. Suddenly, a face looks through one of the basement windows. It is Peter. However, when he calls out her name, she ignores him. Peter breaks the window and enters the basement. He then asks her, “Whats the matter, Jess?” as he slowly approaches.

Fuller arrives with other policemen in tow. They find the patrolman, who was guarding the sorority house, dead in his car. Jess’ screams from inside the house pierce the night air, and the cops break in to it. When they reach the basement, they find Jess and Peter together in a heap. Jess is alive, but Peter’s dead from an apparent wound from Jess’ poker.

They take Jess upstairs to her room where a doctor gives her a sedative. Since Fuller is now unable to question her, he hypothesizes that Peter was the killer, and the case is closed. This news causes Mr. Harrison to go into shock, so the doctor takes Mr. Harrison to the hospital. Chris and the police also head out; leaving Jess unconscious and alone with a guard in front of the house.

Once they leave, we hear the attic door open from the silent house. The bodies of Clare and Mrs. Mac remain up there unnoticed. The killer exits the attic, mumbling, “Agnes, its me, Billy!”

As the camera slowly pulls away from the house, the lone police officer takes a puff from his cigarette on the front porch. The phone begins to ring, just as it did after all the murders that happened before.