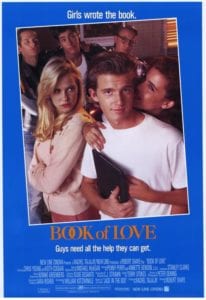 I have to admit, this movie was a fun, light movie when it first came out in 1991. I enjoyed it when I was in college. The reminiscing about lost loves and what-might-have-beens burn in all of us. I bought it again this week so I could watch it today when I’d reached the middle-age of the protagonist at the beginning of the movie. What I discovered is it did not age well as a story. I also realized how many holes in the story existed. Also, the lessons learned are not something any self-respecting parent/big brother would ever teach youngsters.

This is a story of Jack Twiller, a newly-divorced, successful writer who gets a phone call from a friend about an old flame from high school he might want to contact. He opens an old yearbook and memories come flooding back. In flashback, Jack is a senior who moves to a new high school in 1956. He is befriended by Crutch, the neighbor kid who longs to be popular but can’t ever seem to get a break. Jack and Crutch immediately cross paths with the local bully who just happens to be dating the cutest girl in school – and Jack’s crush – and also happens to be the older brother to the cute, tough chick, Gina, who has a crush on Jack. The rest of the story is how Jack and his nerd-like gang of nice-guys create silliness and follies at every turn while Jack tries to be James Dean-cool and win the girl of his dreams. All the while, Jack doesn’t realize she’s a snob who only uses Jack to make her bully boyfriend jealous. Yes, you have seen this before.

Here’s the part you haven’t seen before… Jack’s little brother, Peanut, is a super-hero wannabe who watches his trusted older brother not only stick him in a washing machine (again) during the big party scene, but then proceeds to give the kid a beer (he’s 9 btw) and takes him to a carnival strip show and leaves him there unescorted to basically drool at the striptease like any red-blooded 9yo pre-pubescent will do. No kidding. Where were the censors on this scene? And btw, I’m not a prude in any way about movies.

But this scene was inappropriate on every level. With the exception of Jack’s ridiculously caricatured ’50s June Cleaver-esque mother, parents are pretty much non-existent. It’s like the kids are set loose on the earth with few rules and no supervision. No wonder the bullies are able to chain a kid to his cot, put a candle in his butt, and sing him “Happy Birthday” before blowing out the candle at Ranger Camp. Again, yes, that is an actual scene. Truly not a family-friendly romp you’d expect for a 1950s nostalgia flick.

If it all kind of seems formulaic, you are right. There isn’t much new territory in this teenage romp about popularity, first loves, cars, and losing one’s virginity on Prom Night. I thought it was fun – even funny at times – years ago. Today, it seemed slow, forced, and fairly boring actually. It just feels kinda hollow now. The only character I really liked this time around was the bully’s younger sister, Gina. Finding out the guy chose a different girl after a memorable Prom Night with the right girl makes me wonder if the protagonist was paying attention to his real life — or just day-dreaming past the best parts of his relationship.

Please understand I like Chris Young, Keith Coogan, Michael McKean and some of the other actors in this movie. I just don’t think this is a story I will watch again. My understanding is this movie is adapted from a book I’ve never read. From the reviews on this site, the book and movie are nothing alike. I would have to believe those reviews. If this movie was a book, I wouldn’t waste my time when there are much more realistic and well-written stories from the 1950s I’d rather read/watch. To be honest, I’m saddened to feel the same about this movie today when I genuinely enjoyed it in 1991. Sad how times change. Even sadder knowing my joyful memories of this movie faded as well with this re-watching. I will be getting rid of this movie at the next garage sale.

A friend delivers John Twiller greetings from a long gone high school girlfriend. This makes him open his school's yearbook