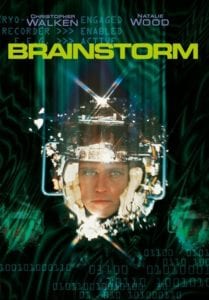 Mike Brace is a technological genius who’s created a device that can record and play back human thought. However, when the military catches wind, it emerges as an unwanted silent partner in his project. Soon, Mike and his wife are thrust into a breathless, non-stop race to prevent the machine from falling into the wrong hands and becoming the ultimate government weapon.

I loved this movie when it came out in 1983. It was original, cutting-edge, provocative. Imagine the unlimited possibilities of not only seeing but FEELING the same emotions and thoughts of someone for all to see for all-time… Not only watching a Bon Jovi concert, but actually BEING Jon Bon Jovi at that concert! What about the rush of adrenaline and terror of an astronaut at the moment of liftoff – and their first spacewalk? How about standing at the plate with bases loaded, full count in the ninth inning of the seventh game of the World Series??… Makes your mouth water, doesn’t it?

The concept of this story was excellent. The genesis of recording personal thoughts and impulses onto transferable media for download at your leisure was fresh. Christopher Walken cast as Michael and Louise Fletcher as Lillian were excellent together. The special effects are dazzling and thought-provoking. On BluRay, the screen switches between full-frame for the story and widescreen for the “virtual reality” sections. It’s really marvelous to watch actually. But that’s where the awesomeness ends…

It was the rest of the cast that absolutely killed whatever positive momentum this story had going for it. The wooden acting, cut-and-pasted story lines and timelines, the military ALWAYS getting into the act and becoming the bad guys… It lost all it’s charm after the first 30 minutes.

Natalie Wood, although a fine actress from another era, was completely wasted in her last role. I know this movie was threatened to not be completed when she died suddenly in the middle of production. While sad, the movie was bigger than her small but pivotal role. She just sat there and watched Walken and Fletcher do all the heavy lifting. She smiled pretty and cried pretty and made the halo pretty and… That’s it. She just… existed in the movie. I have to believe had she survived, this movie would have been soooo much better.

How Cliff Robertson kept getting the same roles where he played the rich, good-looking good guy-who-becomes-the-bad guy over and over again is beyond me. His character’s arc could be seen the moment he said “trust me”. Sure. He’s done the same slick and sinister character since “3 Days of the Condor” and it never got any better. It just got old. Using ANYBODY else would have at least given us a sense of suspense.

In this case, it was more like “here we go again…”. And when the military showed up halfway through and basically created a covert “Brainstorm” project while locking out the original creators of the project in the first place… Maybe those things happen in real-life but they’re clichéd to death in sooooo many movies. This one just looked inept by the end. Hint to “future military takeover bad guys in movies”: Make sure to remove all the backdoors of the good guys BEFORE you take over the world. They can come back to bite you.

And whomever cast the slimy Andy Warhol-lookalike as the sneaky traitor to the project should be positively fired on the spot. If the character is unbelievable the moment he shows up on screen, there’s no way another SMART (i.e. Louise Fletcher) character would ever trust the guy. Someone with no talent should never, ever translate into MORE screen time. He was supposed to be some kind of genius that robbed people of their creations? The guy couldn’t even quote his lines properly let alone be crafty enough to steal someone’s life’s work.

The moment that guy showed up, the movie ended being interesting and became just another “screw ’em so they can fight back” movie. And the son was literally not needed at all. He was talentless AND took away from the story. How do people get roles in Hollywood anyway? Sorry, I’m not normally THIS harsh on actors since I can’t act either but when I CAN act better than they do then they literally killed a great story.

Christopher Walken was great in his role, although he was left to stare at the camera while in his halo for far too many minutes of the film. And Louise Fletcher was positively excellent as the most interesting character – and then she dies to further the storyline. It was perfect for the story. But it was still a shame to kill off your best character.

So besides those two leads being good, and an EXCELLENT concept, this movie drags everywhere. Don’t let the polyester suits fool you. This movie, although dated, was cutting edge in it’s time. Unfortunately, it has aged badly – just like the polyester. And the acting positively killed what could have been a truly enjoyable tale of “what could have been”. Instead, we’re left with wasted opportunity.

For the concept, this is easily a 10. I truly, genuinely wish they would remake this story today with a capable cast of actors. But because of the horrible acting – with the exception of Walken and Fletcher – this is a 5. I’d rate this a 6 overall compared to other movies. Sad. This could have been one of the great ones.