Barbi is a famous fitness selfie queen who finds herself lost in the wilderness after her first date with the super hot Jake goes terribly wrong. Lost without cell service, supplies or survival skills, she begins a harrowing journey back to civilization with her face buried in her phone. Searching for the ultimate selfie, Barbi misses a huge alien mothership battling Homeland Security airplanes.

Now, as surviving agents counter attack on the ground to protect ‘Murica from the forces of intergalactic evil, Barbi meets Agent Radcliffe, Earth’s great hero. Through a series of misadventures, Barbi realizes that she must change her ways to become a better person. While facing her fear of losing fame and becoming a crazy cat lady, Barbi manages to save the world from the alien invaders… 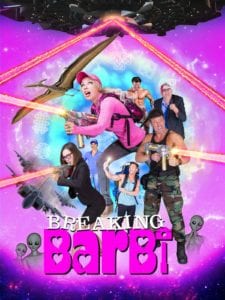 When fitness model and selfie queen, Barbi Brennan, swipes right on the perfect Tinder date, things head south when she and Jake hit the trail for some freestyle climbing. Jake quickly finds himself between a rock and a hard place, and Barbi winds up lost in the hills of Los Angeles.

Without a signal for her cell phone, Barbi loses all contact with her 100,000 Instagram followers, and she desperately scrambles to find some reception. Focused on that instead of what matters in life, Barbi misses out on the beauty of the nature around her. Barbi finds herself totally clueless, with no supplies, or sense of direction.

As our ditzy heroine stumbles through the jungle, she fails to spot a massive alien ship hovering above her as it battles top-secret government planes from Homeland Security. Eventually, she meets some of the government agents who do their best to fight off the aliens.

With Barbi still oblivious to the alien invasion, she takes a mushroom trip through series of slapstick misadventures ranging from wild animal attacks to friendly butt probes to clown chase sequences.

Somehow, Barbi ends up falling into the arms of Agent Kenny Radcliffe, but as he gives her advice on how to escape the nature trail, Barbi becomes distracted by a steamy daydream of her hunky hero.

Soon Barbi’s aspirations for fame and glory are destroyed when she runs into her selfie-queen rival, Jessica. Now, with nothing left to live for, Barbi finds herself just as lost in life as she is on the trail. She come across a badly injured Kenny, who finds himself caught in an alien beam that tries to steal his mind.

Barbi runs away to relative safety, but realizes that she needs to lead by example and not words if she wants to be the person she wants to be. She returns to Kenny, grabs his mighty weapon, and shoots that bag of dicks out of the sky.

Impressed with Barbi’s bravery, Kenny offers her a job working in his secret branch of the government where she will forever be known as Agent Ronin.